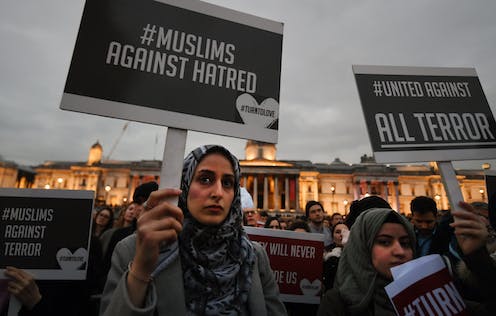 People across the world paid their respects to those who lost their lives during the terror attack in Christchurch.Andy Rain/EPA, CC BY-SA

The terrorist attack in Christchurch was an expression of racist hatred that is being disseminated systematically across the globe by some media, think tanks and grassroots groups.

To actively challenge and...

The terrorist attack in Christchurch was an expression of racist hatred that is being disseminated systematically across the globe by some media, think tanks and grassroots groups.

To actively challenge and dismantle racism, we need to create communication platforms for people who experience it. At the Center for Culture-centered Approach to Research and Evaluation (CARE), we have developed an activist-in-residence programme as a framework for moving voices from the margins to the centre.

The Christchurch terror attack is a manifestation of Islamophobia, cultivated by images, disinformation and false narratives that are anchored in the portrayal of a Muslim threat to civilisations, especially western civilisations.

An entire industry has built up to manufacture and amplify hate. It is funded by a small network of foundations, political interests and private donors. They profit from the circulation of hate and propel Islamophobia for political and economic gains.

Hate generates ratings. It captures viewers, justifies neocolonial policies and spawns an entire industry of hate products such as video games and music videos. Individual acts of racist violence have to be seen within this wider context.

The attack is part of a global network of racist terror that is often legitimised by the structures of the state. We need to examine the close relationship between donors and political parties and grassroots right-wing groups that circulate hatred toward Muslims.

The alleged perpetrator of the Christchurch attack referred to US President Donald Trump as an inspiration for the fight to protect white supremacy. This offers an insight into the global reach of the Islamophobia industry. In several speeches on his campaign trail, Trump amplified the trope of Sharia law, stating that Muslims would have to denounce their commitment to Sharia before being granted immigration visas to the US.

Read more: Explainer: what is 'sharia law'? And does it fit with Western law?

Similarly, politicians of various right-wing parties across western democracies have routinely circulated the image of the Muslim migrant threatening western civilisation. In the US, groups such as ACT for America, led by Brigette Gabriel with over 750,000 members, manufacture the threat of the Muslim “other” to organise communities around hatred of Islam. The group positions itself as a national security organisation, drawing up accounts of unwed Muslim migrant and refugee men who threaten white purity and exaggerating links between the influx of Muslim refugees and the threat of rape. Similarly, the image of the Muslim terrorist is often deployed as a heuristic for cultivating the fear of Muslims.

The effects of hatred

The effects of racism are documented in a substantive body of research. A study comparing reliance on media versus personal contact for information about Muslims found that media spread stereotypes, negative emotions and support for harmful policies. The opposite was found for those who relied on personal contact to learn about Muslims.

The study also observed that perceptions of Muslims as aggressive were associated with support for public policies harming Muslims, including military action in Muslim countries and restricting civil liberties of Muslims. Similar studies have observed that white Americans who rely on media as the primary source of information about African Americans – as opposed to personal contact – are more likely to express stereotypical beliefs and hold prejudicial attitudes.

In our own ethnographic work with African Americans in Gary, Indiana, we have documented the effects of racist attitudes and behaviours on the well-being of communities of colour. Racist discourse not only creates continued stress for people of colour, but has a direct impact through threats of violence. The colonial context of New Zealand is embedded in racist ideology that has an impact on the health and well-being of Māori.

Images of the Muslim “other” help sell entertainment programmes and video games, political campaigns cultivating the narrative of “white genocide” and weapons and new technologies sold by the arms industry.

Our research suggests that giving voice to people who experience racism forms the basis for a transformation of racist and colonialist structures. A commitment to challenging the industry of hatred targeting Muslims requires regulation and democratic processes. Everyday forms of normalised Islamophobia need to be challenged as much as extremist articulations of “white genocide”.

Acknowledging racism is the first step toward countering hate. New Zealand’s Prime Minister Jacinda Ardern responded to the attacks by saying “this is not us”. But we can only have a conversation about racism if we acknowledge the white privilege that enables and upholds it.

We need to create opportunities for face-to-face interactions with Muslims in societies that often normalise racism. This means listening to voices that express the uncomfortable experiences of racism.

Recognising the links between racism toward Muslims, immigrants and indigenous peoples is the first step toward dismantling it and beginning a process of decolonising anti-racist interventions.