Review: The Mares, Tasmanian Theatre Company and Ten Days on the Island

The Mares, a new work by playwright Kate Mulvany, was commissioned by the Tasmanian Theatre Company as a vehicle for some of Tasmania’s leading female performers. The work draws on multiple Greek myths to concoct a contemporary mythological feminist play.

The success of this complex and ambitious work owes a lot to Mulvany’s knowledge of the actor’s craft, and director Leticia Cáceres’ ability to create simple theatrical magic. Each of the performers plays at least three roles, often needing no more than a lighting change and a flick of hat or belt to complete rapid transformations.

The Mares flips between an ancient world and the present day practice of racehorse breeding. The first world depicts an island of warrior women, under the leadership of Queen Hippolyta (Jane Longhurst), who are defending their island from Heracles and his cousin, Alexander the Great. As a result of ongoing war between the male and female societies, Hippolyta’s army has been depleted.

Her loyal band of warriors, Thalestris (Jane Johnson), Penthesilea (Melissa King) and Antiope (Ben Winspear) perform ritual remembrances of their departed sisters, either killed by men or “missing in action”. The list of Greek names chanted by Hippolyta and the warrior women is a theatrical version of feminist activist group Destroy the Joint’s list of Australian women who have died as a result of male violence since 2012.

In the contiguous narrative of the Trainer (Sara Cooper) and her Mare (Jane Longhurst), the Trainer explains to a student observer (Winspear), that the Mare must be kept awake under bright lights to stimulate her reproductive system and advance the breeding season.

Jane Longhurst evokes the Mare with skill, with her faraway gaze, distracted swinging head and heavy back and legs. It’s a powerful evocation of equine movement, which suggests that the Mare exists in two worlds at once – in a brightly lit modern dressage arena, and as companion to the mythological female warriors defending their island from the violent incursions of Heracles’ army. 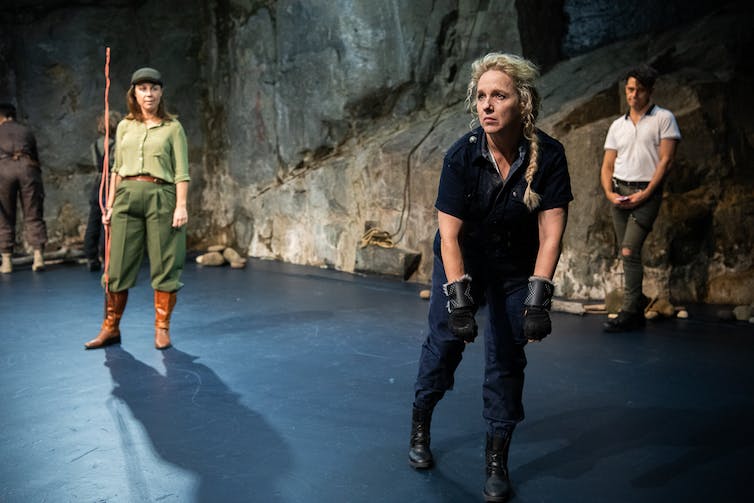 Sara Cooper as Trainer, Jane Longhurst as The Mare and Ben Winspear as Observer. Amy Brown

But not all is well in Mulvany’s idealised ancient world of feminist sisterhood. Thalestris (Johnson) has fallen in love with Alexander the Great. When the warrior women make their way to a nearby islet for their annual breeding ritual with Greek men, Thalestris slips away to continue her enthusiastic love-making with Alexander (Longhurst).

Meanwhile, the virgin Antiope (Winspear), who is attending the breeding ritual for the first time chooses Theseus (Johnson) as her mating partner. Their awkward, teenage encounter allows for some humour and tenderness, a counterpoint to the high-minded tone of much of the text.

Odd wrinkles of comedy do appear in the fabric of the work. These may have been deliberately placed to break the attentive membrane between performers and audience, or perhaps were the result of off-kilter rhythms on opening night. However, the cast handles the swift shifts between mythological and contemporary worlds with flair. 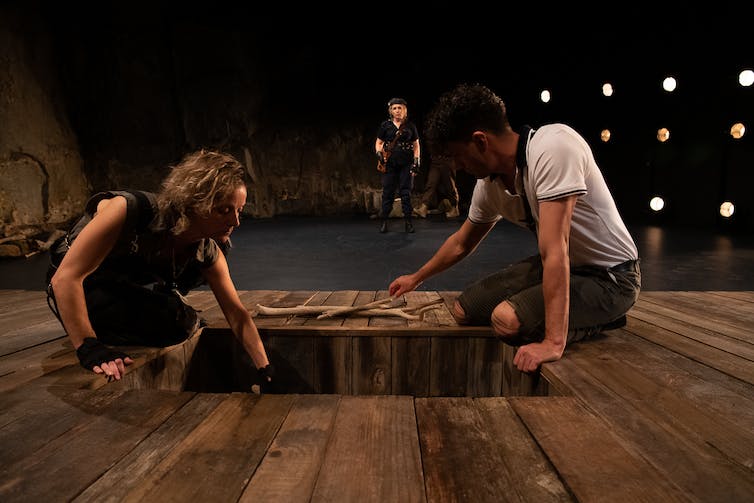 Jane Johnson as Thalestris, Jane Longhurst as Hippolyta and Ben Winspear as Antiope in The Mares. Amy Brown

Nicholas Higgins’ lighting design flips between bright overhead fluorescence and a golden glow from a bank of lights on the side wall. The rocky rear wall of Hobart’s Peacock Theatre, the foot of an old quarry, is utilised by Cáceres and designer Jill Munro to great effect, as both Johnson and Winspear scramble up its face, vividly evoking Hippolyta’s island realm.

Jessica Dunn’s score provides textured sonic underpinning for the two worlds, as well as ritual song and music for the warrior women.

Mulvany’s text winds up to a violent and inevitable conclusion, as her idealised community of powerful women warriors is subjugated by Heracles and his army. In a final exchange between Hippolyta and Heracles (played in this scene by Cooper), the mythological world now tips into a very recognisable sneering misogyny of the present day. The conquering hero is full of contempt for the defeated Queen, because she “no longer bleeds”.

In the powerful final moments, Mulvany fuses the two worlds of the play. The Trainer cannot allow her Mare to mate with a violent stallion, and turns her back on the lucrative business of breeding champion racehorses. The beaten and violated Thalestris, alone on the island with her baby boy, meets the Trainer’s abandoned yet still proud Mare.

The play’s conclusion leaves us wondering about whether women and men can escape their calcified gender roles, and whether violence against women will ever cease.

The Mares bristles with energetic epic storytelling. It is an outstanding example of how skilled artistic collaborations, courageous commitment to big ideas, and support from state funding bodies can result in exciting new Australian theatre. Although made on the island, The Mares could have many more seasons, and should be seen by audiences in a wider world.

The Mares is playing at the Peacock Theatre in Hobart until March 30.