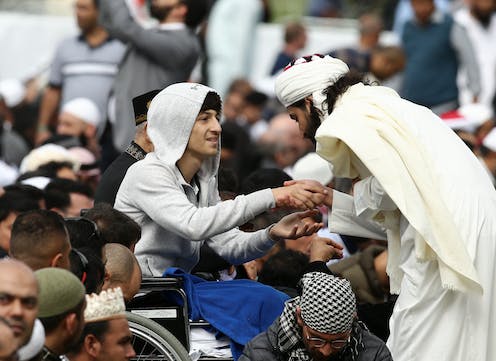 Following the Christchurch mosque shootings, there has been considerable discussion of intolerance and experiences of discrimination in New Zealand.

For example, Anjum Rahman, a spokesperson for the Islamic Women’s Council, has expressed concerns about rising levels of discrimination against the Muslim community.

My aim here is to consider data on the occurrence of discrimination and the extent of tolerance across New Zealand society, in aggregate and by different groups. This allows some generalisable conclusions about what we do and don’t know.

Stats NZ’s most recent General Social Survey (collected between April 2016 and April 2017) allows a consideration of local discrimination and tolerance. It uses an officially collected and statistically representative population sample. It also enables an analysis by subgroups defined by migrant status, main ethnic category and region.

In terms of regional differences, 83.1% of Cantabrians (where Christchurch is) report no discrimination, identical to New Zealand-wide rates. On this evidence, Canterbury is not a local hotbed of discrimination.

How big are the observed difference in discrimination between groups reported above? The standard social science approach divides population differences into “small”, “medium” and “large”. On the basis of this division, the most elevated experiences of discrimination experienced by ethnic minorities and recent migrants are closest to small in size.

Tolerance of ethnic and religious diversity

The one case where only a small majority express comfort involves a neighbour with a mental illness. Only 53.2% of people are very comfortable or comfortable here.

There are no notable differences in tolerance by migrant status, ethnic category or region. Hence, with the exception of the mentally ill, all groups share a majority value of out-group tolerance, and harbour a similar small share of the intolerant.

However, there is information from the New Zealand Attitudes and Values Study on negative attitudes, in the form of reported anger. People report on a 1 to 7 scale, where 1 is “No anger”, 4 is “Neutral”, and 7 is “Anger”. People report on anger towards several main ethnic categories, as well as Muslims, a religious group. In terms of the sampling approach, these data are less well suited for answering population questions than the official Statistics New Zealand data.

Bearing this caveat in mind, the survey shows a broad lack of out-group negativity. Most societal responses fall between “No anger” and “Neutral”. For example, 91.3% of non-Pacific people report “No anger” to “Neutral” attitudes towards Pacific people. Comparable out-group figures for Asians are 90.3%, for New Zealand Europeans 87.3% and for Māori 86.0%.

All these figures are basically identical. For Muslims the number is slightly lower at 81.9%. But in all cases the share of society in the “No anger” to “Neutral” zone is a large majority. Equally, differences between Muslims and ethnic groups are small.

Unfortunately there are no other religious groups where the anger question is asked. This means there is no benchmark to compare out-group anger towards Muslims. Data on anger towards Evangelical Christians, Hindus or Jews are not collected.

While discrimination experienced by minority groups, defined by migrant status and ethnic category, clearly exists, it is not the experience of a large majority of New Zealanders from any of these groups. Furthermore, group differences are small.

The large majority of New Zealanders also seem to be tolerant, including of different ethnic groups and religions, and are not angry, as far as one can tell, towards Muslims.

Many thanks to Chris Sibley, at the University of Auckland, for making the data from the New Zealand Attitudes and Values Study available. Errors and opinions are mine alone.