The Sixth Global Environment Outlook (GEO-6), the most comprehensive environmental assessment produced by the UN in five years, brought us both good and bad news.

The environment has continued to deteriorate since the first GEO-6 report in 1997, with potentially irreversible impacts if not effectively addressed. But pathways to significant change do exist, and a sustainable future is still possible.

Launched in March at the fourth session of the United Nations Environment Assembly in Nairobi, the 700-page report involved nearly 200 global experts who collaborated over 18 months.

It covers, in detail, a range of topics, including air, biodiversity, oceans and coasts, land and freshwater, climate change, human health and energy.

And it assessed the state of the global environment, the effectiveness of policy responses, and possible pathways to achieve the environmental goals of the 2030 Agenda for Sustainable Development.

There is a fair bit of negative information in the GEO-6, which unfortunately reflects the overall state of environmental affairs globally. But it is not all doom and gloom, the GEO-6 has many positive, solution-oriented messages too.

The GEO-6 advises that pathways and approaches to systemic change exist, which must be scaled up quickly to steer the planet towards more sustainable futures.

The considerable connections between environmental, social and economic policies can inform multiple goals. So policies addressing entire systems – such as food, energy and waste – are more likely to have beneficial impact.

For instance, reducing our use of fossil fuels leads to health benefits by decreasing outdoor air pollution responsible for premature deaths. And efforts to eliminate hunger (such as changes in agriculture production) can help address climate change, biodiversity loss, land degradation and chemical pollution.

With the window for action closing quickly, given the unprecedented rate of global environmental change, the GEO-6 is calling for more ambitious and innovative policy.

Here’s what we’re dealing with: 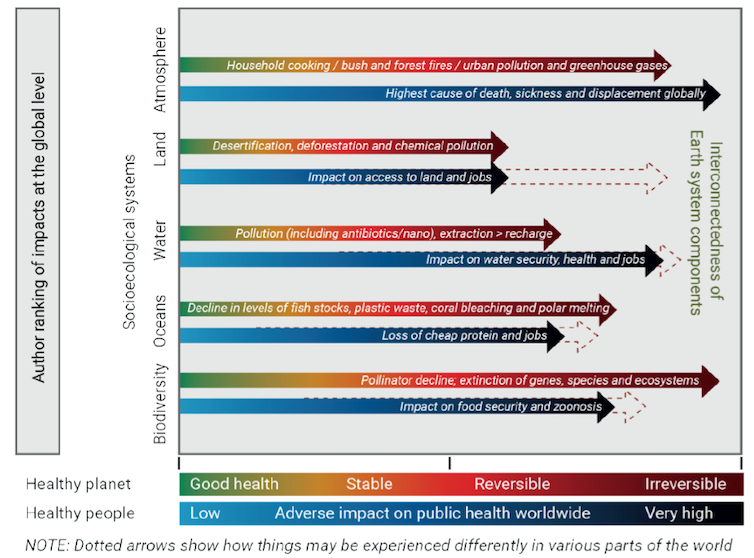 UNEP graph on the relationship between planetary health and human health. Author provided (No reuse)

These and other issues reported in the GEO-6 will lead to ongoing and potentially irreversible impacts if they are not addressed effectively, and immediately.

Typically, environmental policy efforts are based on individual issues, like air pollution, or industry sectors. But this approach doesn’t address the complexity of contemporary environmental problems that require system-oriented efforts at large scales.

Under current policy scenarios, the environmental dimension of the Sustainable Development Goals, as well as other goals like the Paris Agreement, are unlikely to be achieved.

The GEO-6 calls for urgent, inclusive and sustained action by governments, business and society proportionate to the scale and pace of global environmental change.

What it means for Australia

In Australia, positive action is taking place at state and local levels of government, where support for more ambitious emissions targets is generally stronger than at the Australian government level.

And many sectors of society and business are shifting towards more sustainable practices. The booming uptake of rooftop solar and the development of large-scale renewable projects illustrates such a shift.

But when it comes to sustainable development policies at the national level, Australia lags behind most of the developed world, particularly in relation to energy and climate change policy.

Read more: Should Australia recognise the human right to a healthy environment?

We don’t yet have long-term certainty for support of the uptake of electric cars, the transition to renewables, the adoption of fuel efficiency standards, and limiting emissions from the manufacturing and resources industry.

Effective strategies to curb land clearing remains to be seen, and only recently Australia has incorporated principles of circular economy into the National Waste Policy.

With long-term environmental, socio-economic and political stability at stake, it is time for commitment, leadership and robust policies that can last beyond the three-year electoral cycle.