The recent story of four live bees pulled from inside a woman’s eye quickly grabbed people’s attention. News reports claimed the bees were “sweat bees”, the common name for species in the bee family Halictidae.

There are some contradictory and unlikely statements in the many news reports covering this story, so it’s hard to know what actually happened. The images accompanying many reports, which some reporters captioned as the live sweat bees in the Taiwanese woman’s eye, are actually uncredited images from a completely unrelated story – this report by Hans Bänzinger of a stingless bee species (Lisotrigona cacciae) collecting tears from his eye in Thailand. 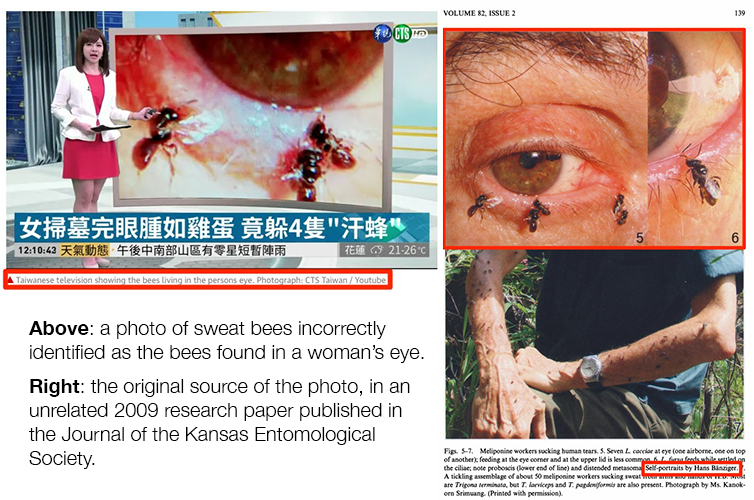 The Guardian/ Bees (Hymenoptera: Apidae) That Drink Human Tears, in Journal of the Kansas Entomological Society. All in all, we would consider it extremely unlikely for multiple adult insects to survive inside a human eye for very long. Most halictid bees are too large to get trapped in your eye unnoticed. Female sweat bees also have stingers so you would definitely know straight away! But whether this story is accurate or not, there are bees who would happily feast on human tears – and blood, sweat and even dead animals. Flower-loving insects like bees and butterflies often seek out other food sources that are at odds with their pretty public image. Read more: Can bees do maths? Yes – new research shows they can add and subtract So why would bees hang around someone’s eye in the first place? It’s a bit of a myth that all bees only collect pollen and nectar for food. There are bee species all over the world that also feed on the bodily fluids of living and dead animals, including animal honeydew, blood, dead meat, dung, sweat, faeces, urine and tears. This is a source of important nutrients they can’t get from flowers, like sodium, or protein and sugar when floral resources are scarce. Read more: Wasps, aphids and ants: the other honey makers The term “sweat bee” is used colloquially for bees that ingest human sweat as a nutritional resource. Many people think the term only refers to bees in the Halictidae family. But not all halictid bee species are known to collect sweat, while many species in the Apidae family, particularly stingless bees, are common sweat-collectors in tropical areas around the world. Swarms of sweat-seeking stingless bees can be a nuisance to sweaty humans in tropical places. And it’s not just sweat; stingless bees have quite diverse tastes and collect many non-floral resources. There are also a few neotropical Trigona species that collect animal tissue as their main protein source, instead of pollen. These species collect floral nectar and make honey, like other stingless bees, but predominantly scavenge on carrion (they are technically know as obligate necrophages). 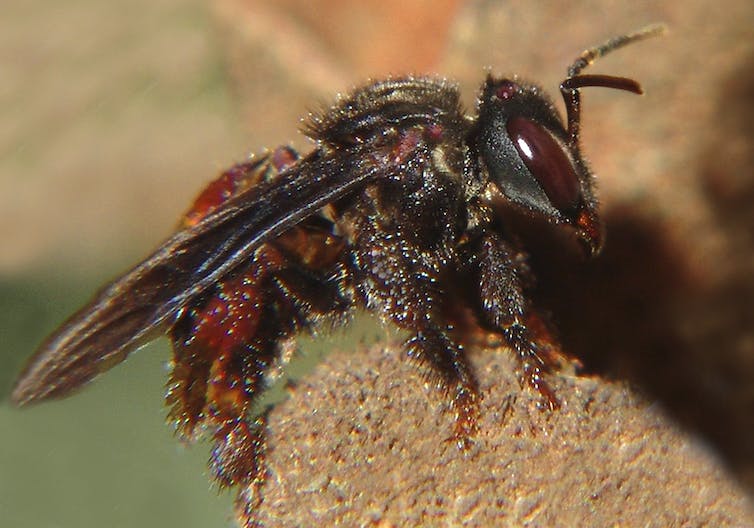 Vulture bees feed on rotting meat rather than pollen or nectar. Wikipedia/José Reynaldo da Fonseca, CC BY-SA Regardless of taxonomy, bees that are attracted to sweat often use other bodily fluids too, like tears. Tear-feeding is such a common behaviour among insects, it has an official name: lachryphagy. Some stingless bees from south Asia, such as the Lisotrigona species mentioned above, are well-known lachryphagous insects, often seen congregating in groups around animal eyes (including humans) to harvest fluids. They don’t harm the animal in the process, although their activity might be a nuisance to some. In South America, Centris bees are large, solitary apid bees, in the same family as stingless bees and honey bees. These bees are often observed drinking tears from animal eyes; published observations include interactions with caimans and turtles. Bees aren’t the only insects that regularly drink from animal eyes. Our world-famous hand gesture, the Aussie salute, is designed to deter the common bush flies (Musca species) that hang around our faces on hot days, looking for a quick drink of sweat, saliva or tears. These flies are also commonly seen clustered around livestock eyes on farms. The feeding habits of butterflies would shock many people who think they are dainty, angelic flower-frequenting creatures. Butterflies are common feeders on dung, carrion, mud and various other secretions, including animal tears. Moths are also well-known nocturnal feeders on animal tears, even while they are sleeping. 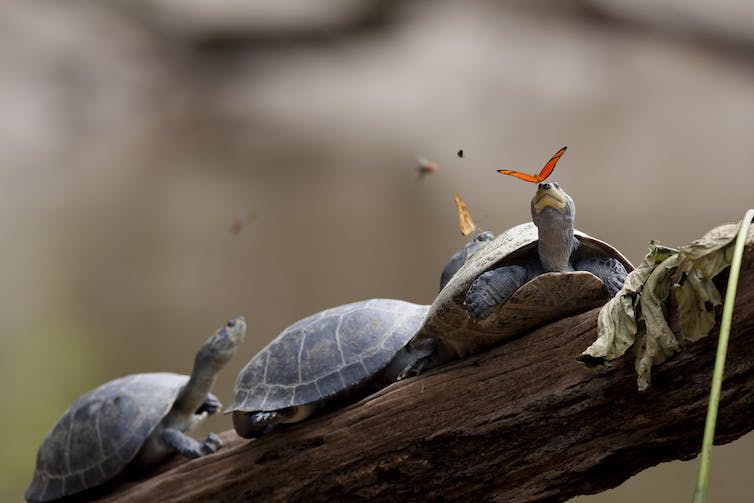 Julia butterflies drinking the tears of Arrau turtles in Ecuador. Wikimedia/amalavida.tv, CC BY-SA Although most of us wouldn’t like the idea of an insect drinking out of our eyelid, this isn’t the stuff of nightmares. It’s just another fascinating, but little-known, story of how animals interact with each other. From a bee’s perspective, an animal’s eye is just another food source. Read more: Catch the buzz: how a tropical holiday led us to find the world's biggest bee It produces secretions that provide important nutrients, just like a flower produces nectar and pollen. Although entomologists know this behaviour occurs, we still don’t fully understand how common it is, or how reliant pollinating insects are on different animals in their local environment. But, while tear-collecting behaviour is normal for many insects, the odds of live bees crawling inside your eye to live are extremely low.