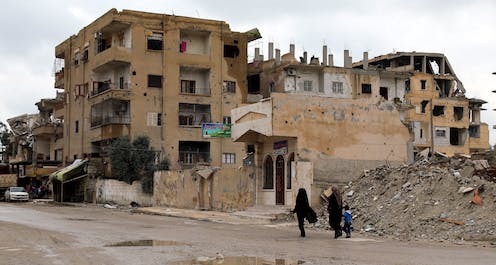 Last week’s revelation that a New Zealand nurse has been captured by Islamic State and detained in Syria for almost six years has caused tensions for the New Zealand government.

Louisa Akavi was working for the International Committee of the Red Cross (ICRC), known as Red Crescent in the Middle East, when she was captured in 2013. When the ICRC revealed her name last week, New Zealand PM Jacinda Ardern didn’t welcome the move.

The government and New Zealand media had kept the story secret in a bid to improve her chances of surviving.

Read more: The rout of ISIS gives the world an opportunity to defeat its ideology

Louisa Akavi is an exemplar of humanity. The New Zealander of Cook Island descent is a highly specialised nurse who has offered her skills to those in need, wherever they are. She has conducted 17 missions for the ICRC since the mid-1990s.

If there was a high-risk war zone in the last 30 years, odds are she had been in it. The ICRC – neutral, practical, discreet and focused on relieving human suffering irrespective of where it was found – had Akavi working for them in northern Syria. She was captured there while travelling in a medical convoy in October 2013, a little over a month after arriving. If she is still alive, she will have been in captivity longer than any other ICRC worker in the aid organisation’s 156-year history.

Exactly who captured Akavi is uncertain. Hostages, local and especially foreign, were taken and traded among groups in a thriving illegal market for reasons of both economic return via sale to others, ransom to foreign governments or propaganda value.

If there was a point when Avaki’s life would have hung by a thread, it would have been in late February 2015 when Sir John Key’s National government decided to join the conflict against Islamic State and help train Iraqi forces. Few matters could have weighed more heavily on the mind of the government than the risk of Akavi facing a fate similar to that of many other Western hostages, who paid the price for New Zealand’s intervention in that war.

But there have been several sightings of Akavi since then. That she appears to have survived suggests other considerations might have been at play.

The most obvious is that Akavi was not partisan in the conflict. She was a mature woman, working for the ICRC, and she had medical skills that may have been useful to her captors.

The problem with this assumption is that Islamic State, like the Taliban and Boko Haram, does not believe it is bound by any of the norms that govern international humanitarian law, including the sacrosanct nature of medics and the ICRC in combat zones.

How valuable Akavi was as a medic would have been entirely dependent on how many others with similar skills also existed within ISIS-held areas.

The second reason Akavi may have survived is because she might have had some economic value via ransom. ISIS knew that many Western governments, fearful of the short-term consequences of seeing the public death of one of their citizens, paid ransom demands to get their people home.

But the New Zealand government, like many other Western governments, has a clear policy of not paying for hostages.

The reason this rule exists in international policy is because if such payments are made citizens of that country will be targeted even more in the long term due to expectation of reward. The same thinking applies to the ICRC, which also will not pay for any of its staff who are held hostage. They too know if the ICRC started down this road the number of its members being kidnapped would quickly multiply.

The third reason Akavi may have survived her captivity is that until earlier this week the ICRC, the New Zealand government and the media have all kept her out of the headlines. This invisibility meant Islamic State was not provoked into any hasty actions.

The invisibility of Akavi dissolved when the ICRC – not the New Zealand government – broke the silence. With the defeat of ISIS on the battlefield, The ICRC believed the time was right to appeal for help in finding her, or, if she was still being held, for her (and other ICRC captives) to be released.

For an organisation that prides itself on working behind the scenes and only going public when there is no alternative, this was an unexpected step. It might have been helped by the fact that Akavi did not appear in an ISIS propaganda video following the Christchurch terror attack.

The ICRC’s hope is that Akavi will emerge from the fog of war that still envelopes much of the region, and that she will surface from among the millions of displaced people in and around the region. The fear of the New Zealand government is that although ISIS may have been defeated in their strongholds, parts of the organisation remain intact and it might be holding Akavi, along with others, as one of its last bargaining chips. If this is correct, the New Zealand government is about to get drawn into some very difficult deliberations.

The final possibility is that we may never know what happened to Louisa Akavi. She, along with tens of thousands of others, may have simply disappeared in one of the worst conflicts of the 21st century. Held by a murderous regime which was pounded incessantly, this person, whose only crime was to seek to relieve human suffering, may have paid the ultimate price because she cared about others.