Why are the letters on the keyboard not in alphabetical order?? – Baker, age 9, Arrowtown, New Zealand.

Great question! That question really puzzled me when I was a kid. And so as a grown-up, I decided to research it and write a paper about it.

Let’s turn the clock back. About 150 years ago, all letters and business papers were written by hand. Most likely they were written using a pen that had to be dipped in ink every word or two. Writing was slow and messy.

Then some clever inventors built a machine for typing. The first typewriters were big heavy metal machines that worked a bit like a piano.

Have you ever seen the inside of a real piano? You press a key and some clever levers make a felt hammer hit just the right piano string to make a note.

Read more: Curious Kids: How long would garden snails live if they were not eaten by another animal?

Early typewriters were similar. They had all these levers with a metal alphabet letter at the end of it. You had to press a letter key quite hard to make the metal lever fly across and hit the paper. Hit the A key and the A lever would hit the paper and type A. The paper then shifted a bit to the left, so the next key would hit in just the right place next to the A. Press more keys and you could type a word, or even a whole book.

The first machine had the letter keys in alphabetical order. The trouble was that if you hit two keys quickly the levers would jam. Jams were most likely when the two keys were close together on the keyboard. Rearranging the letters could reduce jams.

Rearranging the letters reduced the risk that two levers would jam.

Christopher Sholes was an American inventor who was most successful in reducing jams. He tried various arrangements, always trying to reduce the need to type two keys that were close together. The best arrangement he could find was similar to the QWERTY keyboard we all use today. (Look at the top row of a keyboard to see why it’s called QWERTY.)

He sold his invention to the Remington Company in the United States. In the 1870s, that company built and sold the first commercially successful typewriters. They used the QWERTY keyboard.

For 100 years or so after the Remington typewriter arrived, vast numbers of people all over the world trained to become touch typists (meaning they could type even without looking much at the keyboard). They were employed to type letters and all other kinds of things for business and government. Because so many people became so skilled at using QWERTY, it became very difficult to get everyone to change to any other key arrangement.

Many other key arrangements have been tried. Some are claimed to be easier to learn or faster to use than QWERTY. But none has proved good enough to beat QWERTY. It seems that we are stuck with this layout, even if jams are no longer a problem.

QWERTY was developed for the English language. Some other languages use variations. For example, AZERTY is commonly used for French, QWERTZ for German, and QZERTY for Italian. Perhaps you can find someone from India, Thailand, Japan, Korea, or China. Ask them to show you the keyboard they use in their language. 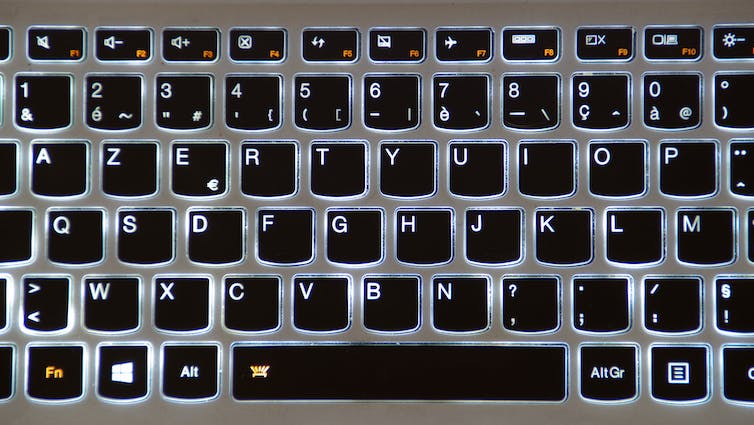 Now, on any keyboard, feel the F and J keys carefully and find some tiny bumps. Place your first fingers on those keys, and your other fingers along the same row. Your left fingers should be on ASDF and your right on JKL;. These are called the “home keys”.

Keep your fingers resting lightly on the home keys. Type other letters by moving just one finger up or down and perhaps a little sideways. Learn how to do that quickly, without watching your fingers, and you can touch type!

When I was a teenager, I owned a typewriter. I made a cardboard shield to stop me seeing my fingers as I typed. I used clothes pegs to fix it to the typewriter. Then I found a touch-typing book and started to practise, making sure that I kept my fingers on the home keys and always used the correct finger to type each letter. After lots of practice, I could touch type. I love being able to touch type. It has helped me all my life, first as a student, then in everything I have done since.

Now with computers it’s easier than ever to learn to touch type, even if QWERTY at first seems strange. There’s lots of good software to help (your school may have some), some of it feeling like a game.

Find software that you like, and put in some practice. It may seem hard at first, but persist and you will soon get good at it. Find a friend or two and do it together. Perhaps make it a competition. You’ll never regret being able to touch type.

Read more: Curious Kids: why do eggs have a yolk?