Today we kick off a four part election series on wages, industrial relations, Labor and the union movement. In the first, University of NSW professor Andreas Ortmann examines Labor’s proposal to have the Fair Work Commission award a so-called “living wage” instead of a minimum wage. You can read a comparison of Labor and the Coalition’s industrial relations policies here.

If elected, Labor has promised to ask the Fair Work Commission to substantially increase the minimum wage, at present pegged at A$18.93 per hour or $719.20 per week.

It says the intervention is justified because under current rules, the commission is required to set a minimum that is a bare safety net, rather than a minimum that someone could use to live properly. This was a change introduced by the Howard government.

Labor’s change will take place “over time,” taking into account the capacity of businesses to pay, and the potential effects on employment, inflation and the broader economy.

It will only apply to the minimum wage, not to other award wages.

The first step will be for the Fair Work Commission to determine what a living wage should be. In doing so, the Commission will consider submissions from community organisations, business representatives and unions. The Commission will also take into account Australia’s social wage (the amount of tax people pay, and any family tax benefits or other transfers they receive)

The second step will be for the Fair Work Commission to consider the time frame over which the increase should be phased in, taking into account the capacity of businesses to pay, and the potential impact on employment, inflation and the broader economy. It will be the Fair Work Commission’s responsibility to determine a fair and responsible phasing in of a living wage.

The idea makes sense as part of an election strategy that responds to concerns about stagnating real wages growth as well as the impact of the Fair Work Commission’s penalty rates decision, the well-documented problem of wage theft, and the related problems of a growing gig economy and a growingcasuals labour market segment.

What’s happening to the land of the fair go?

There is considerable evidence to back up the perception that Australia is no longer the land of the fair-go that it once was perceived to be.

Exhibit A: According to a recent Reserve Bank bulletin, the share of Australian income going to labour has drifted from its height of above 60% in the 1970s down towards 50%. At the same time the share of factor income going to the owners of capital has climbed from 25% towards 40%. (The remainder is classified as “gross mixed income” which has remained fairly stable.)

Exhibit B: Over the past half-decade, wage growth has done little more than keep up with inflation.

Exbibit C: Inequality is increasing, a point recently acknowledged by the Productivity Commission. At the top it seems to be driven more by the seeking of favours than by productivity, a point persuasively argued by Gigi Foster and Paul Frijters.

What happens when you push up minimum wages?

There is debate in the academic literature about the effects of lifting minimum wages. The basic claim is that, as for most things, the higher the price of a worker (the worker’s wage) the less of the thing (the worker) an employer will use.

This may not be a bad thing for workers, a point many people do not seem to grasp. If the percentage wage increase brought about by a higher minimum wage was bigger than the percentage drop in quantity demanded for labour that followed, it might still be worthwhile from the workers’ point of view.

As it happens, there is considerable real-world evidence suggesting that when minimum wages are increased, the quantity demanded for labour doesn’t fall much if at all. I recently reviewed the extensive academic literature on the minimum wage. It got a jolt in the mid-1990s with the massively-cited study by Card and Krueger who found a fairly big jump in the New Jersey minimum wage had no effect whatsoever on employment in the New Jersey fast food industry. 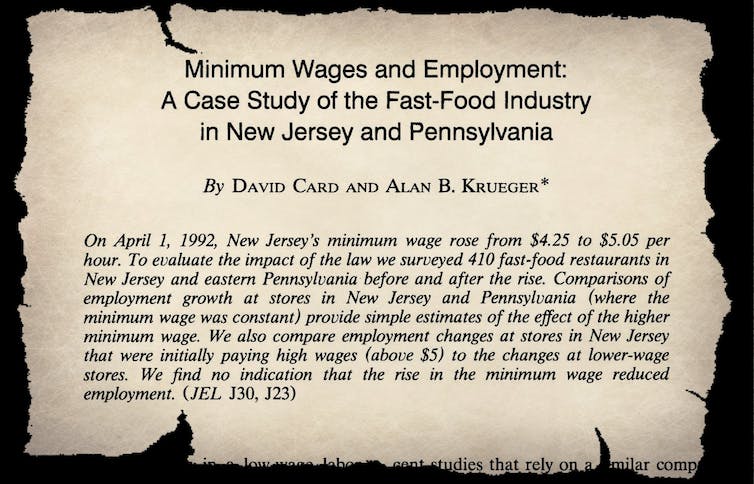 While not everyone likes the conclusion, the literature that has followed over the next three decades has overwhelmingly confirmed that employment effects of higher minimum wages are nonexistent or minimal at worst. It also suggests that in some circumstances, higher minimum wages might actually help employers by cutting turnover.

Australia current minimum wage appears to be in the zone where a further increase would cause few problems.

Of course, there’s more to work than supply and demand. Work is where most of us spend much of our lives. It gives us meaning, allows us to feel valued, and gives us the means to make the most of the leisure time it leaves over.

Unless work is fairly paid, crime for example might become attractive.

Where did the idea of a living wage come from?

In 1907, three years after the Commonwealth Conciliation and Arbitration Court had been formed, its first president Henry Higgins used an application for tariff protection from the maker of Sunshine harvesters as a test case to determine not merely what was the minimum that their workers should get, but what each needed to support a wife and three children in “frugal comfort”.

His test was “the normal needs of the average employee regarded as a human being living in a civilised community”. After interviewing workers and their wives, he arrived at the sum of 42 shillings per week.

Read more: How the old idea of the living wage has been embraced by the political establishment

Although it was challenged (and lost) in the High Court, the idea of the legislated minimum being a living wage rather than a bare minimum became the Australian standard, until the WorkChoices Act introduced by Prime Minister John Howard in 2005, which specified instead that it should be a “safety net”

It seems hard to argue that in light of Exhibits A – C that the current minimum wage of $18.93 is a living wage.

The mechanism that Labor has proposed should ensure the move to a higher minimum wage is not too disruptive. Slightly more disruptive might be its promise to restore Sunday and public holiday penalty rates cut by the Fair Work Commission in 2017.

But unless it also address other issues including wage theft, increased underemployment and the related problem of an increasing casualisation of labour, as well as tax concessions for negative gearing and capital gains that benefit high earners at the expense of low earners it won’t have done enough.

Work is changing. Automation is likely to destroy 14% of of our current jobs in the next 15 to 20 years; another one third are set to change radically. Union membership has fallen from more than half of the workforce to about one sixth leaving the future for many workers uncertain and their ability to ask for wage rises handicapped.

Read more: Australian politics explainer: the Prices and Incomes Accord

In the 1980s, Australia’s Hawke government negotiated an Accord with the trade union movement in order to ensure predictable but not inflationary wage rises.

Between 1967 and 1977, West Germany adopted a program known “concerted action” to achieve the same sort of thing.

While neither were lasting successes, the idea of building trust between parties that have conflicting interests has potential. In some ways it is similar to the process that the Fair Work Commission currently uses to determine annual adjustments of minimum wages and awards. A lot can be achieved when people think they are being listened to and think the process is fair.

To work, it needs trade unions respected and taken into the tent as representatives of workers. Bill Shorten is in a good position to do it.

Read more: The false hope offered by talk of a living wage