As the 2016 election was a double-dissolution, with all senators up for election, half the state senators were awarded long six-year terms expiring in June 2022, and the other half received short three-year terms expiring on June 30. The order-of-election method was used: the first six senators elected in each state won long terms, and the last six got short terms.

There have been several disruptions. First, SA Liberal Senator Cory Bernardi, who has a long term, defected from the Liberals to form his Conservative party. Family First Senator Bob Day was disqualified by the High Court, and replaced by Lucy Gichuhi, who later joined the Liberals. This means that the Liberals swapped a long-term senator (Bernardi) for a short-term senator (Gichuhi).

Former One Nation short-term senators Fraser Anning and Brian Burston have left the party, and will contest this election for different parties – Anning for his own party, and Burston for Clive Palmer’s United Australia Party (UAP).

When Jacqui Lambie was disqualified by the High Court in Tasmania, Steve Martin was elected as her replacement. However, Lambie had a large below-the-line vote, and these votes did not flow strongly to Martin. As a result, while Lambie was elected with a quota and had a long term, Martin did not get a quota. The Liberals received an additional long term, while Martin got a short term. Martin later joined the Nationals, so this change is not as important as it looked.

Read more: Liberals gain a Tasmanian long Senate term due to citizenship saga, while polling on Adani is mixed

The table below shows the 36 senators that are not up for election. Centre Alliance (CA) was formerly the Nick Xenophon Team. The one Other is Cory Bernardi.

Senators that are not up for election in 2019.

The table below shows the 40 senators that are up for election. The five Others are the Liberal Democrats and Burston (UAP) in NSW, Derryn Hinch in Victoria, Anning in Queensland and Storer in SA. 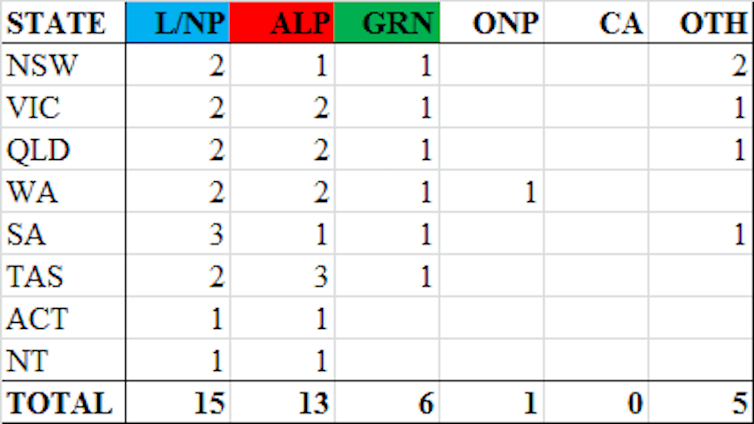 Labor currently has 26 senators and the Greens nine, for a Labor/Greens total of 35 of the 76 seats. To win 39 seats and a majority, the two parties would need to gain a combined four seats.

Effectively, that means Labor needs to gain four seats, as the Greens are defending seats in every state, and are very unlikely to win two seats in any state. The only possible gain for the Greens is in the ACT, but that would require the Liberal vote to fall well below 30% – a quota is one-third of the vote, or 33.3% with two seats.

A quota for election in the states is one-seventh of the vote, or 14.3%. It will be difficult for Labor to gain in Queensland, a state where populist parties do well, or WA, a conservative state where Labor habitually wins two Senate seats at half-Senate elections. In Tasmania, Labor will probably struggle to defend its three seats.

Labor should gain a seat from Others in NSW and SA, and is a chance to gain Hinch’s seat in Victoria. If Labor held all their other seats, they would have 29 senators.

The Greens are defending six seats. They should retain comfortably in Victoria, WA and Tasmania – states where they won two seats at the double dissolution. NSW, Queensland and SA are more problematic.

The Coalition is only defending two seats in every state except SA, so the only likely loss is that third SA seat. If the Coalition does unexpectedly well, they could gain several seats, rising into the mid-30’s in seats from their current 31.

Other than the Coalition, Labor and the Greens, it is more likely than not that a right-wing populist (One Nation and the UAP are most likely) will win a Queensland Senate seat. The UAP or One Nation could also be a threat in NSW. Hinch could win again in Victoria, the Centre Alliance is running in SA and Lambie in Tasmania.

With the higher quota at a half-Senate election, parties probably need at least 5% of the vote to be in contention for a seat (or 5% beyond their second quota for the major parties).

Group ticket voting for the Senate was abolished before the 2016 election. Voters are told to number six boxes above the line, but only one is required for a formal vote. To vote below the line, voters are instructed to number 12 boxes, but only six are required. It is possible with this system that the many small right-wing parties contesting could cause seats to fall to the left that should go to the right.

I had a detailed explanation of how the Senate voting and counting system works in this article about how Anning won his seat on just 19 below the line votes.

Read more: How Fraser Anning was elected to the Senate – and what the major parties can do to keep extremists out

This week’s Essential poll, conducted May 2-6 from a sample of 1,079, gave Labor a 52-48 lead, a one-point gain for Labor since last week. It is the first time in this election campaign that a poll has moved to Labor. However, primary votes were not pleasing for Labor: 38% Coalition (down one), 34% Labor (down three), 12% Greens (up three) and 7% One Nation (up one).

Essential asked about six policies of both major parties. The least-supported Labor policy was reducing tax concessions for investors and self-funded retirees (39-32 support). There were two Coalition policies with more opposition than support: investigating building a new coal-fired power station (34-32 opposed) and allowing doctors less of a say over the treatment of asylum seekers (34-28 opposed).

Overall, voters supported the Labor policy package over the Coalition’s package by a 46-36 margin.

As discussed on Monday, Morgan’s face-to-face methodology tends to skew against politically incorrect parties like One Nation and the UAP.

I wrote for The Poll Bludger about the UK local elections on May 2 and the Spanish election on April 28. The UK Conservatives lost over 1,300 councillors, but Labour went backwards too. In Spain, national left-wing parties won the election, but are short of a majority.