It is understandable that Captain Cook is a trigger for debates about our national identity and history. However, we often risk being blinded by the legacy of Cook. Around the continent, early encounters with outsiders occurred on other days, and in other years before 1788. Across northern Australia these did not involve Europeans, but rather Southeast Asian trepangers.

The earliest documented European landfall was at Cape Keerweer, Cape York, in 1606 with the landing of the crew of the Dufyken. For coastal Aboriginal communities around Australia each moment of encounter was unique, significant and – in many instances – cataclysmic. 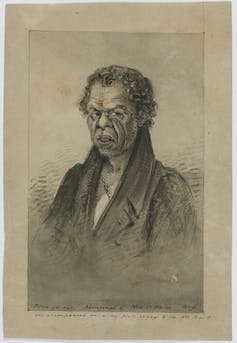 The history of the exploration of Australia’s coast became a media story with Prime Minister Scott Morrison’s announcement that a A$6.7 million replica of Cook’s Endeavour would be built to circumnavigate Australia. Of course, James Cook never circumnavigated Australia. This was done by Abel Tasman in 1642 (albeit at a great distance) and most effectively accomplished in 1803 by Matthew Flinders.

Flinders was accompanied by Boongaree, an Aboriginal man from Port Jackson, now remembered as an iconic Aboriginal go-between for his ability to move between the Indigenous and settler worlds.

Remarkably, Boongaree would circumnavigate Australia a second time in 1817-18, accompanying Phillip Parker King, a consummate explorer. King would captain four expeditions circumnavigating Australia and filled in many details on the map. He and his crew remain unsung heroes of exploration compared to Cook. 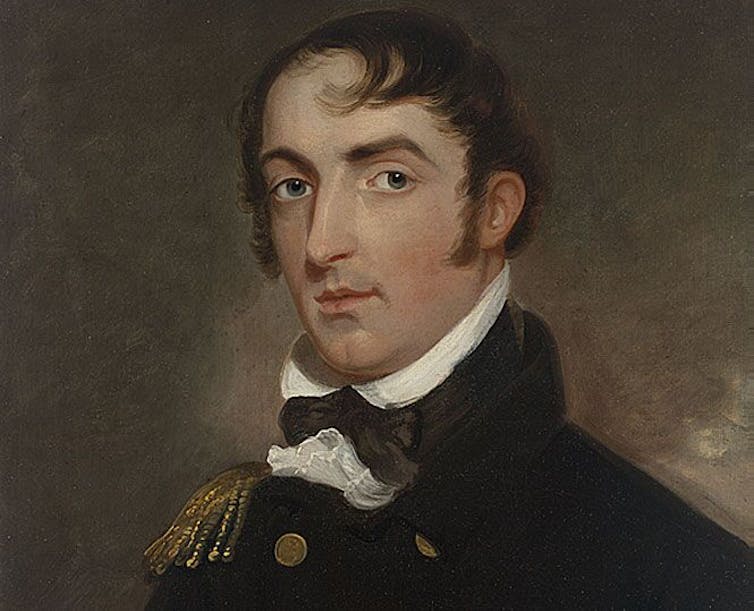 During archaeological field recording in the Dampier Archipelago (Murujuga), Western Australia, our team working with Murujuga Land and Sea Unit Rangers encountered an engraved depiction of a single-masted sailing ship. This image is on an elevated rock panel in an extensive Aboriginal engraving (petroglyph) site complex near a rocky water hole at the south-western end of Enderby Island.

We argue in a new paper that this image depicts His Majesty’s Cutter (HMC) Mermaid, the main vessel of the historically significant British Admiralty survey captained by King. 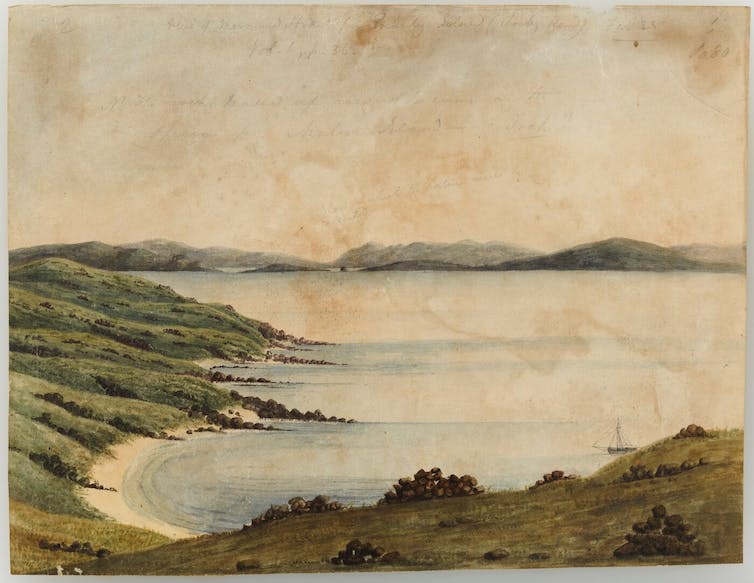 The Mermaid visited the Dampier Archipelago in 1818. It was not the first European vessel to visit - that was William Dampier in the HMS Roebuck in 1699. But King and his crew recorded encounters with Yaburara people. They observed fresh tracks and fires on the outer islands, and described how Yaburara people voyaged between islands on pegged log rafts. 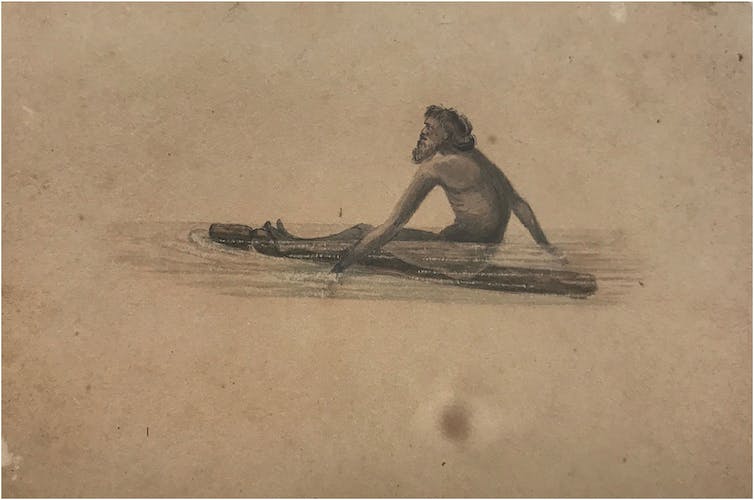 Phillip Parker King, Native of Dampier’s Archipelago, on his floating log not dated, pen, ink and wash and scratching out on card, 7.9 x 11.5 cm (sheet). Transferred from the State Library Board of Western Australia, 2000. Reproduced with permission of the Art Gallery of Western Australia

Murujuga is globally renowned as one of the world’s largest rock art estates. Our work has documented the tens of thousands of years of human occupation, the extraordinary production of rock art and the historical presence of American whalers.

The depiction of the boat on Enderby Island overlooks the bay where the Mermaid anchored two centuries ago. When they went ashore the crew observed Aboriginal camps, and the formidable rocky landscape. Boongaree went fishing, while the expedition’s botanical collector Allan Cunningham planted a peach pip near a fig tree. While there, it appears someone scratched the image of the Mermaid. 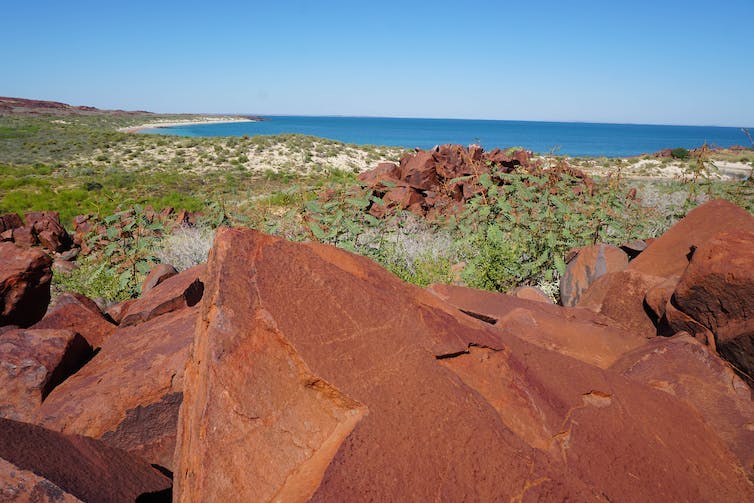 There are various surviving documents from the Mermaid expedition, such as log books, day books, journals, watercolours, and coastal views. Interestingly, in their writings, King, midshipman John Septimus Roe and Cunningham all neglect to mention the engravings, and they did not mention making this image of their ship. We are confident the ship was not made by Yaburara people, as the scratched technique used is very different to the surrounding Yaburara engravings. 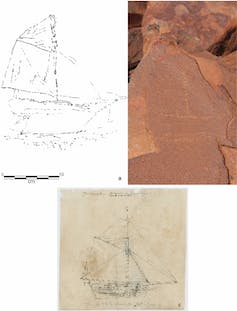 While our investigation suggests that a metal tool was not used to make the image, the imagery – which demonstrates detailed knowledge of the ship’s rigging and proportions, and the inclusions of water in this “sketch” of the craft, leads us to the conclusion that this ship was sketched on the day that the crew of the Mermaid visited this area.

So, who made the image? We really don’t know (but do have some ideas).

The artist clearly knew the ship in great detail. The similarities to the Mermaid are profound, allowing us to rule out other possible vessels to visit the islands in later years such as two-masted whaling barques and pearling ships.

Both King and Roe made many images in their records of the Mermaid – was this one of theirs? Perhaps another unnamed crew member got involved. Perhaps Boongaree was impressed by the extensive rock art legacy that he encountered. Being from Sydney with a similarly rich rock art heritage – which includes the depiction of post-contact sailing ships – perhaps he depicted what was by then utterly familiar to him - a tiny sailing ship on a voyage across the unknown seas.

Whoever’s hand, if this is the Mermaid, as we argue, this new finding is of nautical and historical significance to Australia and Britain as well as being significant to the Aboriginal people of the west Pilbara.

The timing of King’s visit is significant. He was there for eight days in February and March, a time when monsoonal rainfall rejuvenates the rock pools on the outer islands and when turtles were hatching: a seasonal pulse in Yaburara island life.

During that week the crew of the Mermaid described their contact with family groups that were camped on several of the inner islands, as well as the widespread evidence for outer island use. Their encounters with people included the observations of their unique water craft, camps and a range of subsistence activities. One Yaburara man was kidnapped from his mangrove raft, and taken on board the Mermaid where Boongaree tried to reassure him by removing his own shirt to reveal his body marking and black skin. The visitors offered the Yaburara man glass beads, which he rejected.

King’s voyages of discovery left behind other marks along the West Australian coastline. At Careening Bay in the Kimberley in 1820, King had the name of the Mermaid carved into a boab tree, where it can still be found today. At Shark Bay, King had a post erected with “KING” spelt out in iron nails – today this is in the WA Museum. 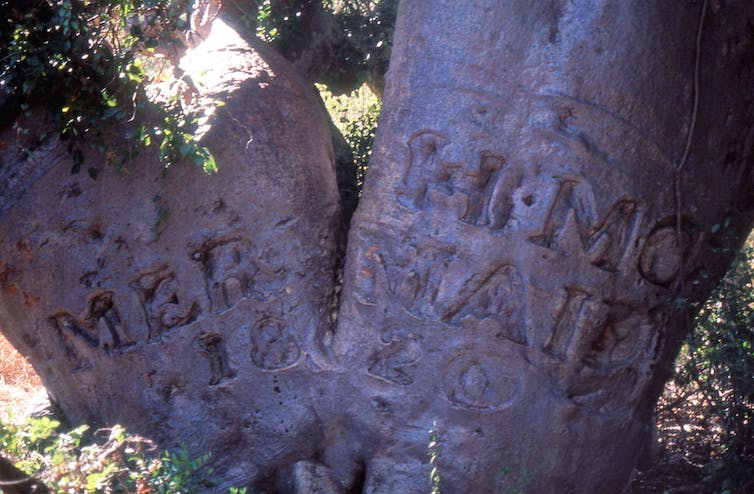 Collections from the Archipelago included plants and stone artefacts still held in the British Natural History Museum. King’s daily journal helped him create his official account, published as two volumes in 1826 titled Narrative of a Survey of the intertropical and western coasts of Australia.

There was no marked national commemoration in 2017 of the 200-year anniversary of the start of King’s voyages. However, as Murujuga’s nomination to the World Heritage Tentative Listing proceeds, this new evidence adds further significance to the Mermaid’s brief encounters with the Yaburara.

It provides new insight to King’s Expedition around this continent’s seascape as well as adding to the deep-time record of Murujuga’s Aboriginal history – and place-making inscribed on this landscape.