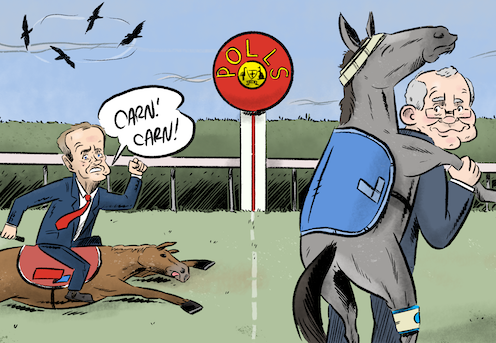 With 57% of votes counted in the election, the ABC is projecting that the Coalition will win 74 of the 151 seats, to 66 for Labor and six crossbenchers. Six seats remain in doubt, so the Coalition is likely to reach the 76 seats required for a majority.

The Coalition gained the northern Tasmanian seats of Bass and Braddon, the Queensland seats of Herbert and Longman, and the NSW seat of Lindsay. The only offsetting gain for Labor was the NSW seat of Gilmore. The Coalition thus gained two seats that Labor won at July 2018 byelections after their members were disqualified by the High Court – Braddon and Longman.

The one piece of cold comfort for the left was that Tony Abbott was crushed in Warringah 59-41 by independent Zali Steggall.

Polls throughout the campaign gave Labor between 51 and 52% of the two party preferred vote. The final Newspoll had a Labor lead of 51.5-48.5, with primary votes of 38% Coalition, 37% Labor, 9% Greens, 5% UAP and 3% One Nation. I believe the poll failure was caused by “herding”: polls were artificially too close to each other, afraid to give results that may have seemed like outliers.

While this was a failure for the polls, it was also a failure of the betting markets, which many people believe are more accurate than the polls. These were the Betfair odds just before polls closed in the eastern seaboard states, implying that the Coalition had only an 8% chance of winning.

Similarly confident betting occurred at the UK’s 2016 Brexit referendum, and then at the 2016 US Presidential election. Both Remain and Hillary Clinton lost. It is long past time that the “betting markets know best” wisdom was dumped.

From the time he became PM, Scott Morrison’s approval ratings were roughly neutral, with about as many disapproving as approving of him in Newspoll. With this unexpected victory, Morrison is likely to be hailed as the new John Howard – he won over the conservative voters that Malcolm Turnbull lost, while maintaining support from more centrist voters.

This is a shattering defeat for Bill Shorten and Labor. The lesson will be not to take big policies, such as a strong climate change target or abolition of franking credit cash refunds, to an election where they can be mercilessly attacked by the opposition. The next Labor opposition will pursue a “small target” policy.

Labor’s defeat is also a disaster for meaningful climate change action. As I wrote before, Donald Trump will use the Coalition’s playbook to destroy the Democratic nominee. Voters don’t want real action on climate change if it is perceived to cost the economy.

I think the only way the Western world is going to get rid of right-wing governments is if an economic crash occurs that is blamed on right-wing policies, such as Trump’s trade war or a no-deal Brexit.

I will update this article tomorrow morning with more information on the count, and the Senate results.