Labor’s finance spokesman Jim Chalmers has confirmed he is considering standing for Labor leader, which would put him up against leftwinger Anthony Albanese, who is already campaigning hard for the position.

"I’ve got a mountain of respect for other colleagues who are capable of leading our party. And so I want to take the time to consult properly with people.”

Chalmers said Labor’s job now “is not to engage in some year-long pity party, or drag our arses around - our job now is to rebuild and renew and refresh”. This would involve a review of all policies, he said. Pressed on Labor’s emissions reduction target, he said “everything’s up for grabs” after the election.

Plibersek had been set to announce on Monday she’d be a candidate for leader. But she said in a statement: “Now is not my time. At this point, I cannot reconcile the important responsibilities I have to my family with the additional responsibilities of the Labor leadership”.

Shadow treasurer Chris Bowen will announce on Tuesday whether he will stand – but he carries the burden of being the driving force behind the unpopular franking credits policy, widely blamed for Labor losing votes.

Sources said Chalmers would not run if Bowen, also from the right, stood.

If there is a contest, the leadership will be decided on a 50-50 basis by ballots of the rank and file and the caucus. The deputy position is decided by a caucus vote.

Read more: View from The Hill: Should Labor jump to new generation leader – and Morrison steal some Shorten policies?

Bill Shorten, who announced after Saturday’s defeat that he would not seek the leadership again, is continuing until a new leader is chosen.

Plibersek said she would stay as deputy until the leadership was determined. “At that point I will serve in whatever capacity my colleagues best think can help Labor return to government,” she said.

She said Labor did “need to take a serious look at our policies”.

Albanese, who declared his bid on Sunday, said the franking issue “was very difficult for us” - it “impacted on people’s hip pockets and some of those of course weren’t very wealthy people”.

“They were people for whom a small cheque was what they paid their rates with or their car rego, or other essentials in life when it came in – so that clearly had an impact for us”. 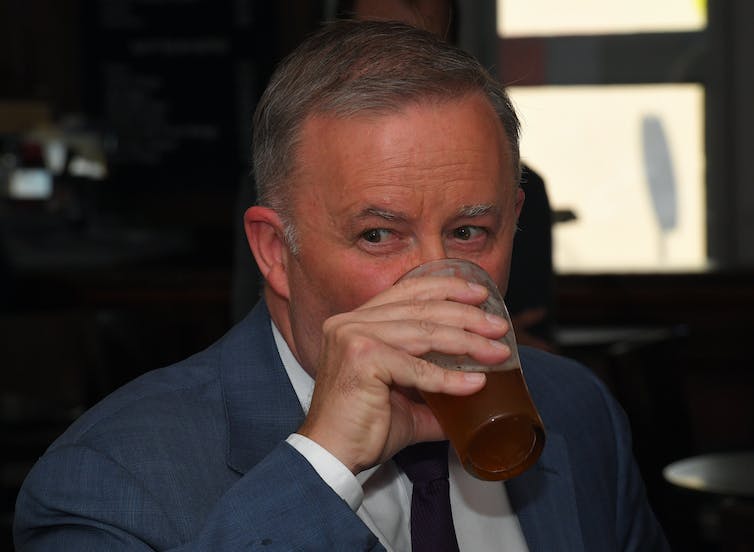 Albanese announced he would be running for the leadership on Sunday. Dylan Coker/AAP

Albanese is also stressing Labor must show that it cares not just about the distribution of wealth but also “about the creation of wealth”.

Making his pitch, he argued he could appeal across the community. He told the ABC he could “walk into a pub in Hughenden or walk into a boardroom in George Street, Sydney, and have a discussion with people which is based upon respect and based upon dealing pretty frankly with people”.

What went wrong for Labor in Queensland had to be examined, Albanese said. “One of the first things I’ll do - if I’m successful - is to go to Queensland, not just to south east Queensland, but throughout Queensland, and to talk with people.”

Read more: Labor's election loss was not a surprise if you take historical trends into account

As the post mortems start in Labor after the unexpected loss, frontbencher Joel Fitzgibbon, who had a big swing against him in his NSW mining seat of Hunter, told the ABC Labor had to “get back to the centre”.

“We have to reconnect to our working class base, reconnect with those blue collar workers, talk more about them and their cost-of-living pressures and less about some of those issues that are more […] aligned with the left side of the debate”.

He criticised Labor equivocating on Adani. The opposition had said Adani had to stand on its own two feet and meet the most stringent environmental hurdles, he said. “But we needed to say a third thing. We needed to make it clear that if it was able to do so, then of course Labor would welcome the investment and jobs. We failed to do that”.

Fitzgibbon threatened he might stand for the leadership himself if there wasn’t someone who indicated “they are the person who is prepared to put us back on track”.

But outgoing senator Doug Cameron tweeted “This is not the time to panic and move to the "centre” as a proxy for abandoning progressive policies and capitulating once again to neoliberalism. There was no Morrison miracle only a scare campaign prosecuted by the billionaires who control the media and the mining industries.“

The government is now assured of a working majority after providing the speaker, with at least 77 seats. Prime Minister Scott Morrison is preparing the reshuffle of his ministry, and held a meeting of cabinet’s national security committee on Monday.