The news of Courtney Herron’s death has shocked Melburnians. While full details are yet to emerge, both she and the man charged with murdering her have been widely reported as being homeless. It’s revealing how news media use this information in framing their coverage of what happened.

Media use of the term “homeless” is rarely neutral. This is not to say someone’s housing status should never be included in reporting such events. However, we should be wary of how media coverage connects homelessness to violent crimes.

Read more: What’s in the name 'homeless'? How people see themselves and the labels we apply matter

Before continuing, we should say we have relied entirely on the information reported in the media to write this article.

On the Monday following Herron’s death, The Guardian ran the headline: “Homeless man appears in court charged with murder of Courtney Herron”.

Including the adjective “homeless” in the headline means the accused, Henry Hammond, 27, is from the outset defined by a lack of housing, and by any adverse associations that might relate to individuals experiencing homelessness. In this context, the expression “homeless man” indicates how “homelessness” can be read as shorthand for criminal offending.

It’s striking that news reporting of Herron’s homelessness has tended to use expressions such as “of no fixed address”, rather than “homeless”, perhaps indicating an awareness of the adjective’s negative associations. The Age quotes an acquaintance as saying Herron should be “remembered for the lovely woman she was and not just another homeless person who died on the streets”.

For readers, knowing Herron was homeless helps us understand her vulnerability. Women experiencing homelessness face a range of risks and challenges, such as higher risks of sexual violence, exploitation and assault.

Read more: 'Just a piece of meat': how homeless women have little choice but to use sex for survival

In contrast, Hammond’s homelessness has been reported in a way that frames the act of violence he has been charged with. Yet how does it help us understand this horrific act? Housing status is not generally included in reporting: we don’t see headlines like “Man who lives in renovated Victorian terrace accused of murder”.

In fact, criminal behaviour by homed people, in the form of family violence, is the main driver of homelessness in Australia. The relationship between homelessness and crime is thus more complex than media coverage suggests.

Hammond’s homelessness may well be an aspect of what has happened, but news headlines like The Guardian’s tap into on a longstanding association in some people’s minds between homelessness and criminality.

Following the 2014 killing of Renae (Yuk Ling) Lau by Scott Allen Miller in King’s Domain, Melbourne, the media depicted Miller as a dangerous monster. His homelessness was central to this framing. One news outlet (The Advertiser) ran the headline “Killer hobo” alongside Miller’s mug shot on the front page. 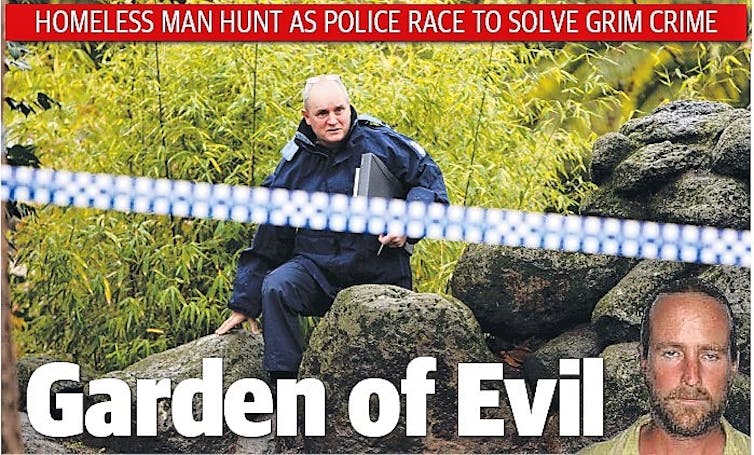 Media coverage can reinforce the connection in some people’s minds between being homeless and criminality. Herald Sun 30 June 2014

Also in 2014, Morgan Wayne “Mouse” Perry was killed while sleeping rough in Melbourne. His homelessness revealed the intense marginalisation and disadvantage he faced. This was in stark contrast to the wealthy privilege of his killer, Easton Woodhead, who was found not guilty of murder because of mental impairment.

There is therefore an entrenched duality at work, in which homelessness leads to victimisation and yet also causes offending. This is inaccurate and simplistic.

The roles of the law and the media

Why is the association of homelessness and crime so strong? There are two main factors.

First, many behaviours made necessary by homelessness are criminalised. Simply trying to survive puts people who are experiencing homelessness in direct contact with the criminal justice system.

In Victoria, for example, begging is a criminal offence. Other laws that unfairly target the homeless include indecent exposure laws, which result in homeless people being arrested for going to the toilet or washing themselves in public (because they lack the option to do so in private).

The second factor is the persistent linking of homelessness and crime in the media.

News stories proliferate in the tabloid media about aggressive beggars, foreign backpackers pretending to be homeless to make money and people who exploit their pets as they beg for donations.

Being homeless means being vulnerable

When reading about any event involving people experiencing homelessness, we should remember that being homeless involves serious vulnerability. Homelessness is better understood not as a condition itself, but as a manifestation of multiple vulnerabilities: mental illness, chronic ill-health, unemployment, disadvantage, lack of education, histories of trauma or neglect, substance dependence and, always, poverty. This remains the case regardless of whether the person in question is a victim, an offender, or a bystander.

Read more: Homelessness soars in our biggest cities, driven by rising inequality since 2001