After last week obtaining a place in the shadow ministry and becoming Labor’s deputy Senate leader, with two men standing aside to make way for her, Keneally now takes on one of the toughest players in the Coalition. She’ll also cover immigration, which comes under the home affairs portfolio but has a separate minister in the government’s ranks.

At Bill Shorten’s side all through the election campaign, Keneally didn’t recoil from the task of head kicking. She called Dutton a “thug” and “the most toxic man in Australian politics”.

Dutton is a head kicker from way back. On Sunday he was quickly out of the blocks.“Kristina Keneally I predict will be somebody who is very spiteful, very nasty and very personal in her attacks, that’s been her history, he said, adding, "I’m not going to attack Kristina Keneally on a personal basis”.

They could make the perfect matchup for those into political bloodsports.

Home Affairs to continue under Labor 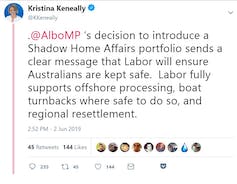 @KKeneally The appointment does mean, and Albanese confirmed, that the opposition is committed to the home affairs portfolio long term, despite Labor’s platform providing for a review. Asked “now that you have a home affairs shadow minister, does that mean you will preserve the portfolio if in power?”, Albanese said: “Obviously the position we have as a shadow ministry is the one that we hope to take to an election and one that we hope to then implement if we were in government”. Keneally tweeted:“@AlboMP ‘s decision to introduce a Shadow Home Affairs portfolio sends a clear message that Labor will ensure Australians are kept safe. Labor fully supports offshore processing, boat turnbacks where safe to do so, and regional resettlement”. Another notable feature of the Albanese frontbench is Bill Shorten’s appointment as shadow for the National Disability Insurance Scheme and government services, where he will be up against minister Stuart Robert. It brings Shorten (who wanted health) back to where he started on the ladder after arriving in parliament at the 2007 election, when he was appointed parliamentary secretary for disabilities and children’s services. His work in the disabilities area laid a foundation for the NDIS. NDIS is now politically important This is not a high profile post for Shorten but because both he and Robert will have a good deal to prove, it could further ensure the NDIS gets a lot of attention, which will be a good thing. Albanese made a point of his shadow cabinet having equal numbers of men and women, 12 each, when shadow cabinet secretary Jenny McAllister is included. The four new members of the shadow cabinet are all women: Keneally, Katy Gallagher, Terri Butler and Madeleine King. At every opportunity Labor highlights that it does way better on the gender front than the government; frequently, Scott Morrison seeks to argue he is doing better than the Liberals did before. Chalmers is Labor’s voice on economics As expected, former finance spokesman and Queenslander Jim Chalmers becomes shadow treasurer. Chalmers has a formidable job in front of him, having simultaneously to carry the day-to-day economic argument while being at the centre of the overhaul of Labor’s most controversial election policies. His colleagues and the public will have abundant opportunity to assess someone who aspires to be leader in the longer term. Chalmers’ first task and Labor’s first test will be when the new parliament considers the income tax cuts legislation at the start of July. Finance Minister Mathias Cormann reiterated on Sunday that the government will not split the package, which includes tax relief for higher income earners in later years. As part of the new economic team Gallagher, one-time ACT chief minister - who has returned to the Senate from her exile in the citizenship crisis - becomes shadow minister for finance. Albanese performs a balancing act Former shadow treasurer Chris Bowen will be health spokesman; the previous occupant of that post, Catherine King, moves to infrastructure, transport and regional development. Tony Burke goes from environment to industrial relations, with Brendan O'Connor, who previously had employment and workplace relations, keeping the former but losing the latter and acquiring industry. This removes the conflict of interest he had, with his brother Michael being secretary of the Construction Forestry Maritime Mining and Energy Union. A number of shadows remain in their old portfolio spots – one is the new deputy leader Richard Marles (defence). Others include Penny Wong (foreign affairs), Tanya Plibersek (education), Mark Butler (climate change and energy), and Michelle Rowland (communications). But Plibersek loses responsibility for women, which goes to Julie Collins. It remains to be seen how much refashioning Butler will have to do to Labor’s climate policy. Read more: View from The Hill: Morrison rewards friends, avoids making enemies and announces new ambassadors There will be the odd interesting balancing act, such as on coal issues. Queenslander Terri Butler, from the left, gets environment and water; Joel Fitzgibbon, from the right, who was concerned how the coal debate swung votes against him in his mining seat of Hunter, has resources added to his responsibility for agriculture. Linda Burney will cover Indigenous Australians in addition to her previous responsibilities of families and social services. It will be important how she and the Minister for Indigenous Australians, Ken Wyatt, both themselves Indigenous, choose to balance conflict and consensus in this area. Leigh gets looked after, Husic declines offer Shayne Neumann has taken a big tumble, from immigration and border protection and a member of shadow cabinet, to veterans affairs and defence personnel in the outer shadow ministry. Pat Dodson is shadow assistant minister for reconciliation, and Andrew Leigh, who lost his shadow ministry because he didn’t have a faction, has been awarded a position as shadow assistant minister for treasury. But Ed Husic, who stood down so Keneally could get one of the right’s spots in the shadow ministry, is not even in a shadow assistant minister position. He could have had one – they were in the gift of Albanese - but declined. Which is rather a pity, given his talents. For the fridge door: