In the heart of Takapuna, north-central Auckland, is a natural lake – Pupuke – while a little way offshore lies the volcanic Rangitoto Island. Long ago, a family of giants lived at Takapuna until one day, ill-advisedly, they insulted the irascible fire goddess Mahuika. Enraged, Mahuika tore a hole in the land where the giants lived, creating what became Lake Pupuke, dumping the material offshore to form Rangitoto Island.

Similar to other Maori stories about volcanic activity in New Zealand, this one is consistent with memories of the formation of Lake Pupuke and that of Rangitoto Island, the latter erupting into existence about AD 1312, perhaps just decades after people arrived in NZ. 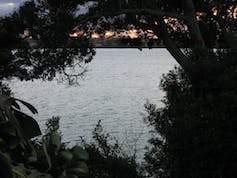 Lake Pupuke formed far earlier, through a singular process involving liquid rock (magma) rising up through fissures in the earth’s crust until – close to the surface – it encountered bodies of cold groundwater. The juxtaposition of the cold and the extremely hot resulted in a spectacular explosion, splattering solidifying rock fragments into the air that settled to produce a ring of rock enclosing a crater.

These types of volcanoes are known as maars, after a German name given them in the Eifel Mountains where they are especially abundant. After maar craters form, most become filled with water, forming lakes like Lake Pupuke.

Many maars are polygenetic – they are sites of periodic volcanic activity – and it may well be that Lake Pupuke showed signs of activity at the same time as Rangitoto Island formed, leading Maori observers of the events to link them.

Read more: Essays On Air: Monsters in my closet – how a geographer began mining myths

Since people arrived in Australia, maar volcanoes have erupted in both the southeast and the northeast of the country. Stories of these eruptions have been told, so convincingly that it is difficult to suppose they are not eyewitness accounts. As an example, the Dyirbal story of the formation of the Lake Eacham maar in Queensland recalls

The camping-place began to change, the earth under the camp roaring like thunder. The wind started to blow down, as if a cyclone were coming. The camping-place began to twist and crack. While this was happening there was in the sky a red cloud, of a hue never seen before. The people tried to run from side to side but were swallowed by a crack which opened in the ground. 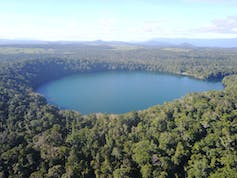 Science shows us that Lake Eacham formed more than 9,000 years ago, meaning that the Dyirbal story is probably at least this old. Perhaps even older stories may apply to the formation of nearby Lakes Barrine and Euramoo.

Recent research has focused on ancient “maar stories” worldwide, highlighting their similarities but, most importantly, using these memorable events to illustrate the extraordinary longevity of human memories. Many maar stories must have endured for thousands of years, passed orally across hundreds of generations. 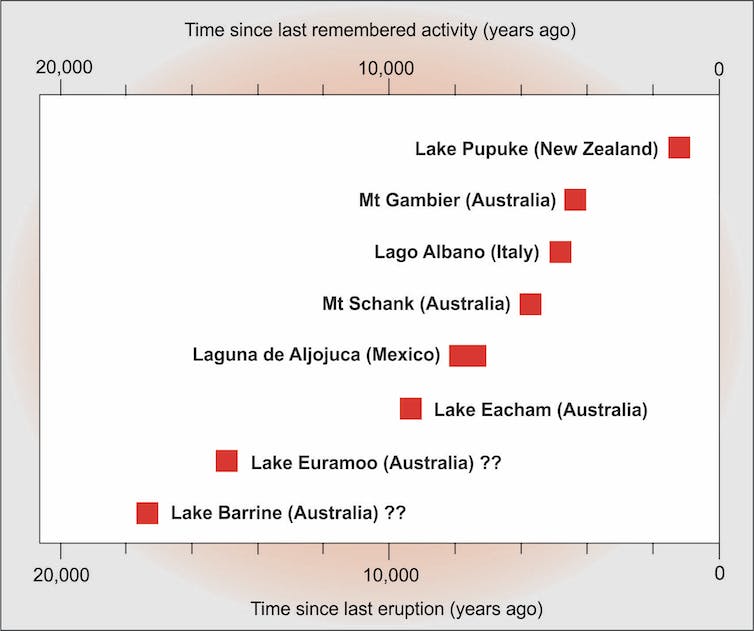 Minimum ages for some maar stories (after Nunn et al., 2019, Annals of the American Association of Geographers).

Some of the best-documented are those from the Lago Albano maar that towers above the Ciampino Plain, southeast of Rome (Italy). Formed maybe as recently as 8,000 years ago, stories about the Albano maar that were first written down about 2,000 years ago originated as oral traditions many millennia earlier.

Periodically, the Albano maar gurgles and moans as liquid rock and superheated water is shunted around within the Colli Albani volcano, of which it is part. Sometimes this causes the form of the maar crater to abruptly change shape, leading the lake to spill over its rim, events that flood the plains below. 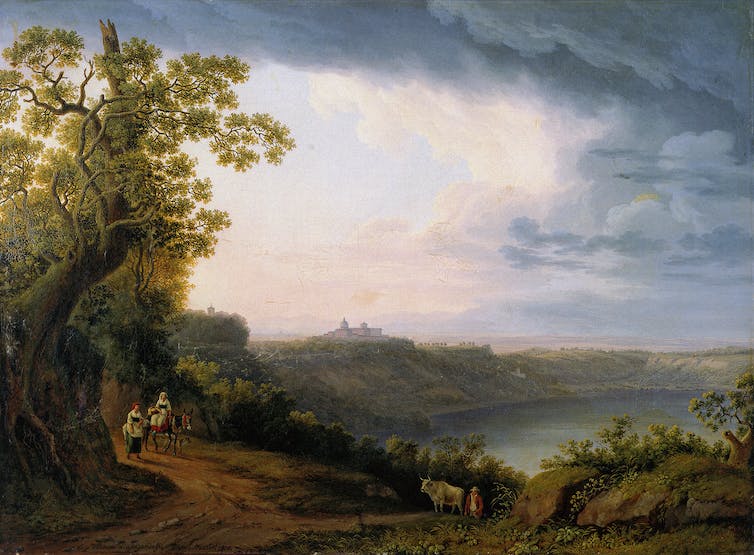 About 2,400 years ago (in 398 BC), during a prolonged drought, there are records showing that the lake level rose slowly and calmly up to the crater rim. According to the account of Dionysius of Halicarnassus, the pressure “carved out the gap between the mountains and poured a mighty river down over the plains lying below”.

To prevent such events reoccurring, the Romans built a tunnel through the Lago Albano crater wall, an incredible 70 metres below the rim, that can still be seen today. No-one seems entirely clear how this engineering feat was accomplished or whether, as some accounts hint, the tunnel simply re-excavated an Etruscan tunnel built centuries earlier!

And so to Mexico, the eastern part of which is bisected by the active Trans-Mexican Neovolcanic Belt, parts of which are peppered with maars. Of one, Aljojuca, the story goes that countless years ago during a prolonged drought, a cow belonging to a poor family went off wandering and, some days later returned home, its feet wet.

Following the cow’s footprints, the family located a “puddle” where today lies a maar crater with a lake (axalapaxco). The story may recall the formation of Aljojuca Maar more than seven millennia ago.

How many more ancient stories might there be hidden under our noses, within tales we have hitherto dismissed as myth? Should we continue to conveniently dismiss all these stories or would we gain something from treating them as accounts of memorable events, conveyed in the language of science as it was known thousands of years ago?