The 2019 State of Origin rugby league series kicks off with game one in Brisbane on Wednesday – and bookies and many experts are tipping the New South Wales Blues to win consecutive series for the first time since 2005.

Queensland’s Maroons side had 11 series wins in 12 years. But mainstays of that team – Cameron Smith, Darren Lockyer, Johnathan Thurston, Billy Slater and Greg Inglis – are all retired and there is optimism south of the Tweed that in coming years the Blues will reverse recent fortunes.

But a quick glance at the numbers suggests the Blues will have to buck a few historical trends if they are to retain the shield for the first time in almost a decade and a half.

Read more: Gamers use machine learning to navigate complex video games – but it's not free

As well as the traditional games in the capital cities of New South Wales and Queensland, game two of the 2019 series will be played in Perth on June 23. 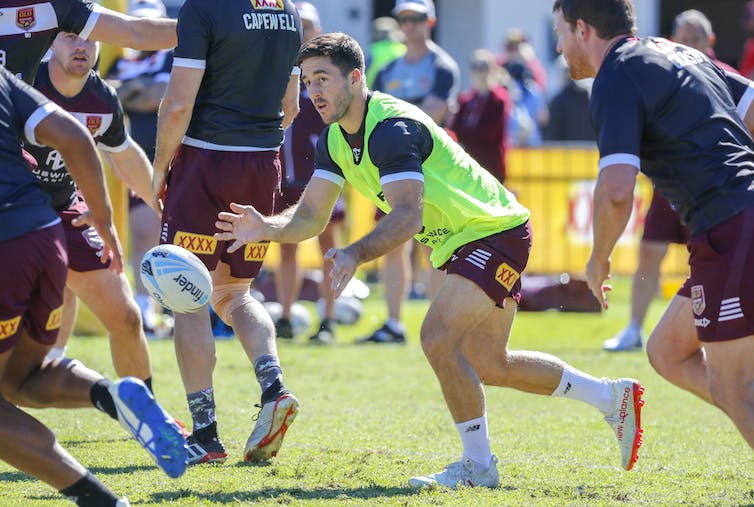 This model of each side having one home game, one away game and one game at a neutral venue has been used 11 times before, always previously with the neutral game in Melbourne. It will be repeated next year too, playing at Adelaide Oval for the first time.

Given the partisan nature of local crowds, it is perhaps unsurprising that both sides have won the majority of their home games (NSW 24 wins from 45, Queensland 35 wins from 55).

The Blues do have that advantage of winning more of the neutral venue games.

But, looking at the margins of victory, these games at a neutral site have typically been closer. The average margin of victory (around 6.3 points) is lower than for games in Sydney (around 8.1 points) or Brisbane (12.2 points).

Only once has the margin of victory been greater than ten points for games outside the traditional locations, a 14-0 Blues victory at Melbourne’s MCG in game two in 1994.

It is easy to note that the strongest predictor of winning a series is getting off to the best possible start with a win in game one.

Only eight times in the 37 best-of-three-era series has a team lost game one but come back to win the series. Of those eight comebacks, only two were Blues series wins (1994 and 2005).

In most of these years, hosting game one also meant hosting game three, so much of this effect is attributable to simple home advantage.

Where the record books provide more worrying reading for New South Wales supporters is their rival’s record when it matters most.

If the series is not decided before game three in Sydney in July, then history is even more firmly on the Maroons’ side. The Queenslanders have won the final game in the series more than twice as often as their southern counterparts (11 NSW wins, 2 draws, 24 Queensland wins).

If you exclude dead rubbers – games when the series winner is already decided after game two – the history books are even sweeter reading for Queensland. Of the 19 times that the final game has been a series decider, the Blues have walked away with the shield just four times.

To win the series this year, the Blues will either need to improve on this ugly record in deciders or to win two games out-of-state, which they have managed just four times in 27 attempts.

After a successful debut series as coach in 2018, NSW coach Brad Fittler will be looking to overcome Kevin Walters’ Queenslanders again this year. If he does so, he will be breaking new ground for a Blues coach.

Of the eight previous coaches who faced the same Maroons coach for their first two series, none of them managed to walk away with two series victories.

One of the most intriguing storylines hanging over this year’s series is currently nothing but a rumour. Despite retiring from the Origin arena two years ago, stories have circulated that longtime captain Cameron Smith may consider making himself available for selection once more.

Such dramatic returns are not without precedent and, in both cases, have resulted in series wins for their respective sides.

After losing 2005 game one, New South Wales recalled Andrew Johns despite his having barely played at all in the previous 18 months. He took man-of-the-match honours in game two en route to a 2-1 series win.

Even more dramatically in 2001, Queensland sneaked 35-year-old former Brisbane Bronco Allan Langer back into the country after he had first retired from the sport, then gone to Europe to play in Super League with Warrington Wolves.

Langer’s vintage performance helped a Queensland side that has been whitewashed 3-0 a year before to clinch a decisive game three victory.

Given the once-in-a-generation talent Queensland has lost in recent years, it is not surprising the Maroons enter the series as underdogs.

Read more: The long and complicated history of Aboriginal involvement in football

But the favoured Blues must be keenly aware that Australian rugby league’s showpiece and television ratings behemoth has thrown up many twists and turns over the years.

A quick glance at the record books might provide more sobering reading for the Blues than some recent sports journalism or bookmakers’ odds.