Why did the dinosaurs die? – Whitaker, age 4.

That’s a great, and tricky question!

We know that dinosaurs ruled the Earth for about 180 million years. Then, around 66 million years ago, a huge rock from outer space (called an asteroid) smashed into the Earth.

It crash-landed near Mexico. It shook the ground. It made big waves in the sea. Any animals and plants that were nearby would have gotten squashed or washed away!

The asteroid made lots of dust and dirt and rocks to fly up into the air. All that dust and dirt covered the planet and made the sky dark. There were many forest fires too.

Before the asteroid hit Earth, there were lots of volcanoes erupting in what we now call India. They made smoke, and ash, and gases fill up the air. We are not sure if the asteroid then hitting Earth made more volcanoes erupt. Maybe it was just very bad timing.

From cold to hot

It was so dusty and dark that the warm sunshine couldn’t reach the ground. This made the Earth very cold.

But after the dust settled and the sun came out, the Earth got very hot indeed. The sea creatures, plants, and land animals didn’t like that very much. The plants probably had a hard time growing. The plant-eating animals ran out of plants to eat, and then the animals that ate other animals also ran out of food. So it became very hard for dinosaurs to survive.

But it’s still really hard to know for sure exactly why the dinosaurs died. Dinosaur-scientists (palaeontologists) still wonder whether it was because of the asteroid, or the volcanoes, or both the asteroid and volcanoes. Did the animals get too cold or too hot? Did they run out of food?

We might not ever know for sure, but we will always keep looking for answers! 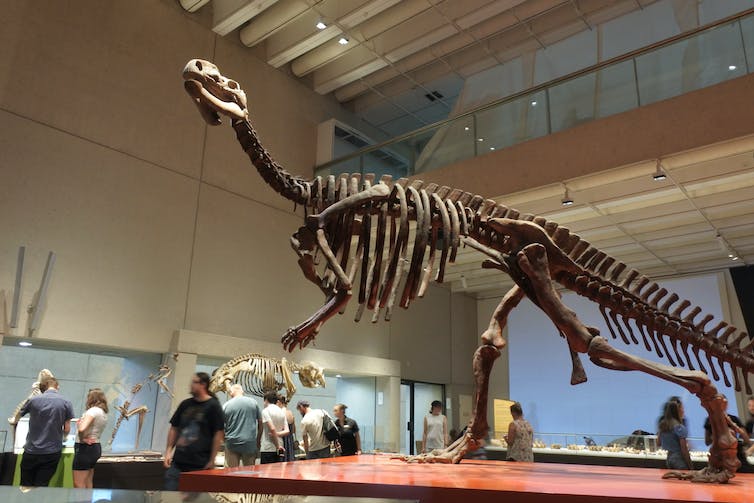 Read more: Curious Kids: How many dinosaurs in total lived on Earth during all periods?

Who went extinct and who didn’t?

Most of the dinosaurs died. We call this going “extinct”. An animal is extinct when it doesn’t exist anymore anywhere in the world.

It wasn’t just most dinosaurs that went extinct 66 million years ago. Among others that went extinct were: flying reptiles called pterosaurs, huge reptiles that swam in the ocean called plesiosaurs and pliosaurs, creatures with curled, spiral shells called ammonites, and lots of other plants and animals. 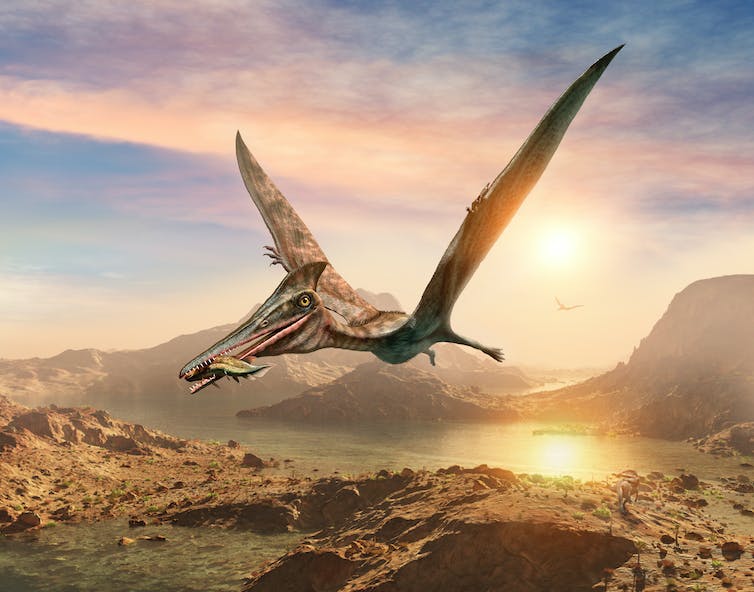 Here’s an artist’s impression of a pterosaurs. Shutterstock 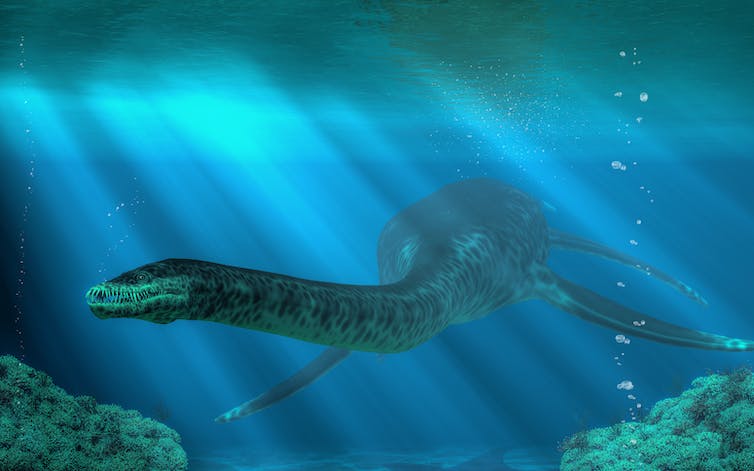 Huge reptiles called plesiosaurs once swam in the ocean. Shutterstock

But others survived. Different types of insects, lizards, crocodiles, mammals, birds, sharks, fish, crabs, snails, flowers, ferns and trees all made it through.

How? We don’t really know.

But we know they survived. 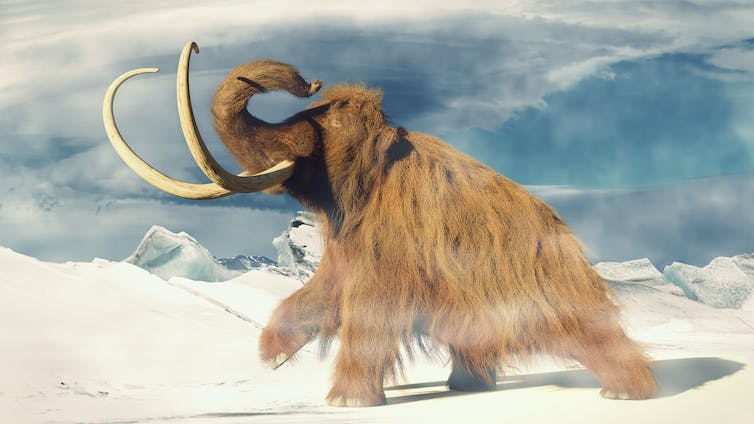 Those animals and plants found new homes. And as the plants grew bigger and stronger, the animals could grow bigger too. They could take the place of the big dinosaurs that had died. Big woolly mammoths, giant kangaroos, and whales now roamed the land and sea. New types of plants grew, like grass. And a long time later, human beings evolved – that’s us!

Not all the dinosaurs died

Did you know that not all the dinosaurs went extinct 66 million years ago? They’re not the type of dinosaurs you might be thinking of, like Tyrannosaurus, or Brachiosaurus, or Muttaburrasaurus. The dinosaurs that survived were… birds!

Ancient birds lived beside other dinosaurs. They survived the asteroid and volcanoes. And now birds live alongside us today.

I think it’s sad that all the other dinosaurs went extinct so long ago. But we can remember them by visiting museums and looking at fossils, or by reading books about them, or by watching birds fly through the sky.

But if it weren’t for all the other dinosaurs going extinct so long ago, fluffy little mammals wouldn’t have had room to grow and evolve. And there wouldn’t be any humans.

Today’s birds evolved from prehistoric times. Birds survived the asteroid that led to the extinction of dinosaurs.