When you are in the northern part of Western Australia, one of nature’s joys is seeing a large boab tree close up, perhaps for the first time.

The boab (Adansonia gregorii) is a native to this part of Australia, but is related to the broader group of species called boababs that live in Madagascar and Africa – but more on that connection later.

Boabs are also called bottle trees, the tree of life, boababs and Australian boababs. Some of the indigenous Australian names include gadawon and larrgadi.

From their iconic swollen trunks, to living up to 2,000 years and the many uses for their “superfood” fruits, here’s what makes boab trees so fascinating. 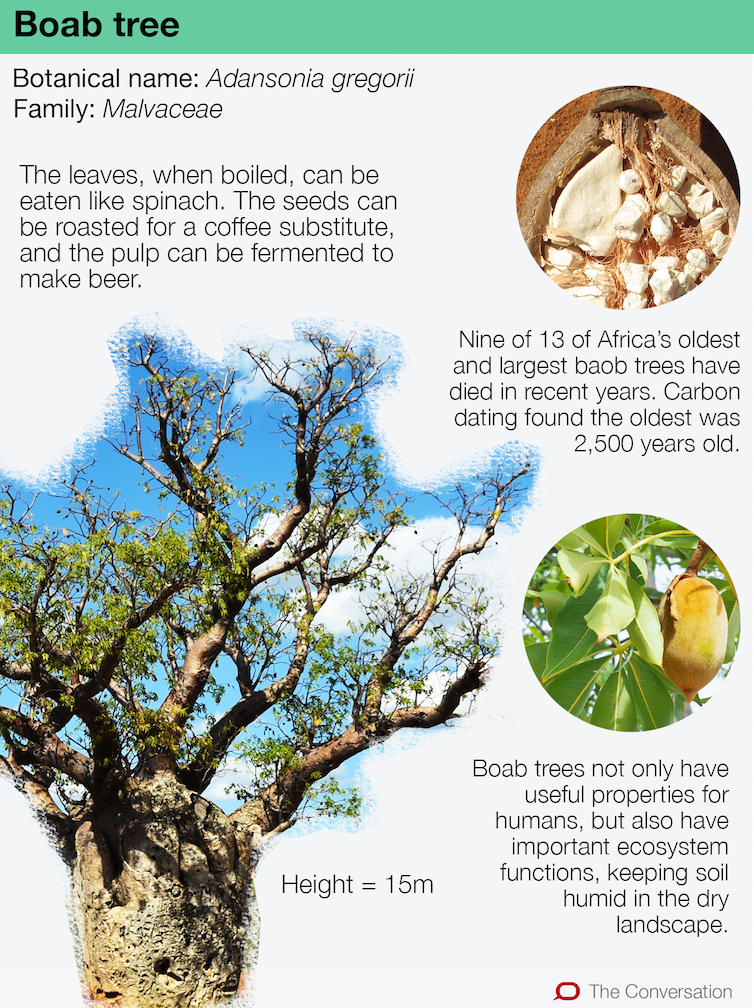 The Conversation The ‘upside-down tree’: trunks that save lives and lock up prisoners While the boab in Australia is not quite as well-documented as the African species, specimens have been recorded at over 1,000 years of age. Some living trees have been estimated to be nearer to 2,000 years old. And while it’s difficult to age the trees, several specimens of the African species have been dated at 2,000 or more years old. Australian boabs can grow up to 15 metres tall at maturity and have swollen, attention-grabbing trunks called a caudex, which may be up to five metres in diameter. The African boab species, A. digitata, can be much taller, at 25 metres high and with a diameter of up to 15 metres. Read more: Iconic boab trees trace journeys of ancient Aboriginal people In such dry continents, the caudex is a life-saver, often containing water, which was tapped by Indigenous folk. It has been estimated that some of these huge old trees can hold more than 100,000 litres of water in their trunks. In Africa, these massive trunks have been used as shelters, homes, farm sheds and, more recently, even shops and bars. Sadly in Australia, legend has it the huge trunks were used to make lock-ups for Indigenous people and other prisoners. 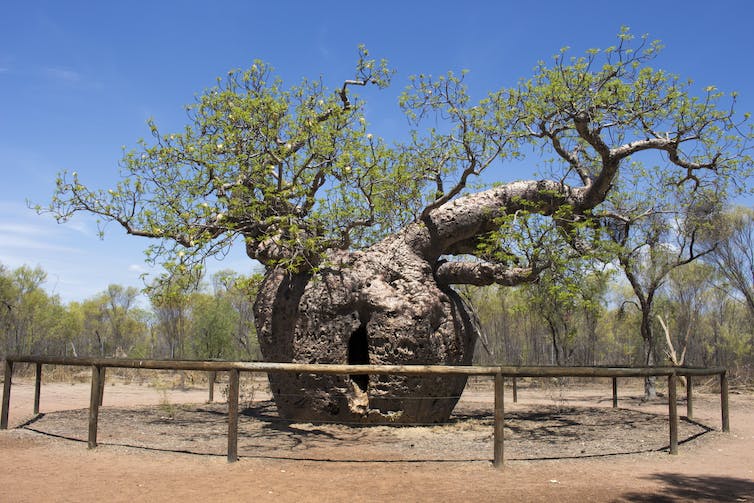 The infamous Boab Prison Tree, just south of Derby in Western Australia, was said to have once held Indigenous prisoners. Shutterstock It’s not just the trunk that can stop you in your tracks. The boab has a unique branching structure, one that looks more like a root system than a canopy. Some locals in Africa will tell you the tree was dropped from heaven to earth and landed upside down. So the African species of boab is sometimes called the upside-down tree. Boab fruits are ‘superfoods’ and its shell has many uses A. gregorii, the Australian boab species, has large, attractive white flowers up to 75 millimetres in length. Its round fruits are edible and sought after by birds, mammals and humans. The fruit gives rise to some of the common names for the tree, such as monkey bread tree and dead rat tree. The latter comes from the appearance of older fruits in the canopy looking a bit like … well, dead rats? Read more: Baobab trees have more than 300 uses but they're dying in Africa In fact, there’s great interest in fruits from the African species, A. digitata, which are considered a “superfood” because of their high levels of antioxidants, calcium, potassium, magnesium, fibre and vitamin C. It’s assumed many of these traits will be shared by the Australian boab, but there is little research as yet to prove it. 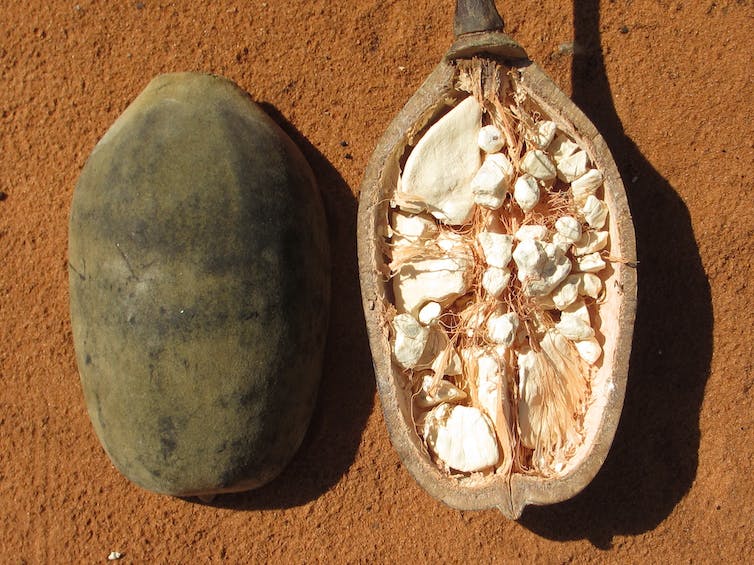 Fruit of the African boab tree fruit are initially covered in velvety fur. Ton Rulkens/Wikimedia, CC BY-SA The soft part of the fruit is surrounded by a hard, coconut-like shell that’s initially covered in a velvety fur. The hard shell has been used for cups and bowls, but has also been intricately carved and decorated by Aboriginal artists in Africa and Australia. If the seeds are left inside the fruit as it dries, they can be used for toys like rattles. On both continents, Aboriginal people have eaten the white powder that surrounds the seeds. The leaves are rich in iron and the pulp from the fruits tastes like cream of tartar. The Indigenous people of both continents were also well aware of the medicinal uses of the fruits. The bark and leaves of the trees also treat various ailments, but particularly those associated with digestive disorders. Read more: Science the loser in Victoria's alpine grazing trial But at present there is very little modern research on the medicinal and dietary aspects of either the baobab or boab. How the boab tree got to Australia One of the mysteries surrounding the boab is how it got to Australia – the Australian species has clear affinities with related species in continental Africa and Madagascar. 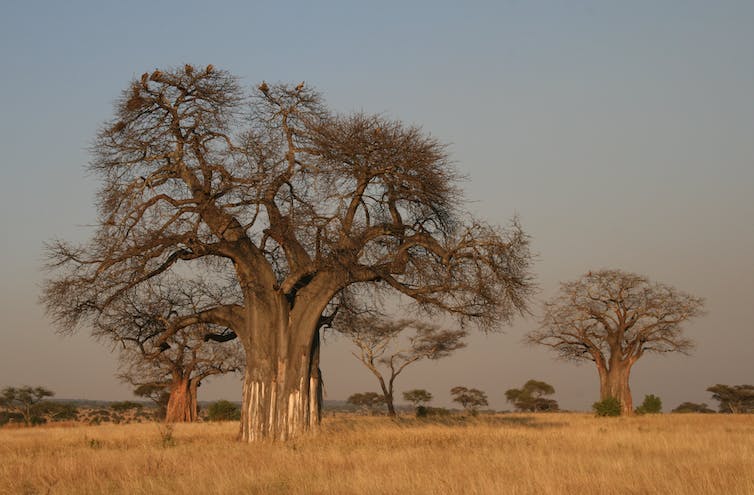 A baobab tree, Adansonia digitata, in Tarangire National Park, Tanzania. Its journey from Africa to Australia remains a mystery. Yoki/Wikimedia, CC BY-SA There are three intriguing theories. The first is that all of the boababs originate from the super-continent Gondwana – consisting of Africa, South America, Antarctica, Australia, India and Madagascar – before it fragmented almost 80 million years ago. But A. Gregorii and A. digitata are so similar genetically that, given the millions of years that have elapsed, this theory is now in question. The second theory comes from recent DNA analysis of the species. It suggests they separated more recently, perhaps only 70,000 years ago, which raises the question, were humans involved in their journey? But did they come to Australia from Africa, or from Australia to Africa? The latter is a less likely scenario given the direction of ocean currents. And the third theory is that fruits arrived on the Australian shore after an epic ocean voyage from Africa. Read more: Dark tourism, Aboriginal imprisonment and the ‘prison tree’ that wasn’t Boabs are usually found in the remote outback of Australia, but in 2008, a large 750-year-old boab was transported from Warmun in the Kimberley to Perth and transplanted in Kings Park. Transplanting such a large tree is both daunting and fraught, with a high chance of failure, but the deciduousness and growth habit of the boab gave some cause for optimism about a successful outcome. For the reward of having a large old boab growing in Perth, it would be worth it. After a period of stress, the tree appears to be coming good, reflecting the toughness of the species. A large, mature boab is a splendid tree of arid Australia that inspires awe in all who experience them close up. They really are a beauty and a bottler of a tree!