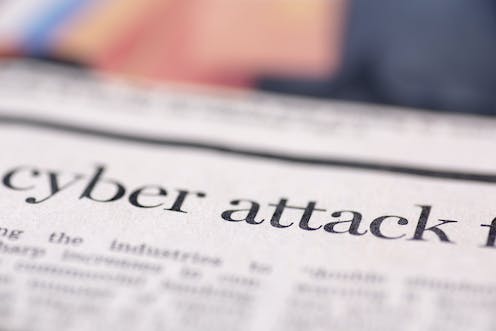 At a conference last week, Australia’s defence minister Linda Reynolds and Defence Force chief Angus Campbell referred to national security risks using two terms that may not be familiar to many. In her speech, Senator Reynolds said:

What is clear now, is that the character of warfare is changing, with more options for pursuing strategic ends just below the threshold of traditional armed conflict – what some experts like to call grey-zone tactics or hybrid warfare.

The concepts of “hybrid warfare” and the “grey zone” arguably build on longstanding military strategies. What is relatively new is adversaries exploiting information technology vulnerabilities to achieve an outcome.

As Senator Reynolds and General Campbell highlight, activities in the information domain are a serious threat to our national interests. They demand the development of strategies to counter them.

What is hybrid warfare?

Hybrid warfare is an emerging, but ill-defined notion in conflict studies. It refers to the use of unconventional methods as part of a multi-domain warfighting approach. These methods aim to disrupt and disable an opponent’s actions without engaging in open hostilities.

While the concept is fairly new, its effects and outcomes are often in the headlines today. Russia’s approach to Ukraine is an example of this form of warfare. It has involved a combination of activities, including disinformation, economic manipulation, use of proxies and insurgencies, diplomatic pressure and military actions.

The term hybrid warfare originally referred to irregular non-state actors with advanced military capabilities. For example, in the 2006 Israel-Lebanon War, Hezbollah employed a host of different tactics against Israel. They included guerilla warfare, innovative use of technology and effective information campaigning.

What do is meant by the ‘grey zone’?

Related to hybrid warfare, the term political warfare commonly refers to power being employed to achieve national objectives in a way that falls short of physical conflict.

Such warfare is conducted in the “grey zone” of conflict, meaning operations may not clearly cross the threshold of war. That might be due to the ambiguity of international law, ambiguity of actions and attribution, or because the impact of the activities does not justify a response.

Recent discussions, including last week’s speeches, focus on the newer aspects of these concepts – specifically activities in the information domain.

Our increasing connectivity and reliance on information technology is a vulnerability that is being targeted by two key threats: cyber attacks, and the subversion of our democratic institutions and social cohesion. Both are recognised challenges to our national security.

These are “hybrid threats” as they may be employed as part of a broader campaign – including political, criminal and economic activities. And because they feature the ambiguity associated with the grey zone, they are well suited to achieve political outcomes without resorting to traditional conflict.

While cyber attacks are carried out by a variety of actors, there is an ongoing low intensity cyber conflict between nation states. This includes attacks and counter-attacks on critical infrastructure, such as power grids, reported between the US and Russia.

How do you defend against cyber attacks?

Cyber attacks are of particular concern to the Australian government. What makes them quite different from traditional warfare is that the targets of cyber attacks are not just the military (although the Australian Defence Force (ADF) has recognised the significant risks it faces in operating highly information-dependent systems).

A hybrid warfare approach would likely target all elements of national power including critical infrastructure, business systems and individuals.

Australia has taken great steps to protect against cyber attacks. Led by the Australian Signals Directorate (ASD), public and private sector organisations are being encouraged to improve their cyber security through the “essential 8” mitigations. These mitigations are focused on improving the security of systems via controls, such as patching vulnerabilities and multi-factor authentication, but they should be complemented with programs to increase user awareness of cyber threats.

ASD also has an acknowledged ability to undertake active defence to respond to attacks. This effectively makes ASD the only authorised entity in Australia who can hack back.

Despite efforts to characterise the cyber grey zone, it is surrounded by gaps in international law. The government’s international cyber engagement strategy is helping to address these gaps. The strategy establishes priorities to work with other nations on security, standards of behaviour and cooperative mechanisms to fight cyber crime.

How do you defend against political warfare?

Disinformation and deception are not new concepts in warfare, but we have seen a significant change in how information is being manipulated by nation states, especially through social media.

Authoritarian governments have demonstrated the ability and intent to control information domestically. For example, information in China is controlled by the state through a censorship system commonly known as the Great Firewall of China.

There also is growing evidence such authoritarian governments may seek to interfere with other nations’ affairs through manipulation of information. The 2016 US election and UK Brexit vote are suspected to have been influenced through such interference by Russia.

Democratic nations have a level of transparency and adherence to international law that precludes their involvement in disinformation campaigns. For similar reasons, they also typically aren’t prepared to defend against such campaigns.

But, as suggested by General Campbell, this needs to change. More needs to be done to develop our national ability to coordinate efforts to counter a hybrid campaign.

The hybrid warfare term may be in vogue, and its continuing use is uncertain. But hybrid warfare, with its various forms, is here to stay due to its obvious benefits to the actor employing it: deniability and exploiting the legal grey zone.

While the term might be interpreted by some as a matter for the military, there are many aspects that require a coordinated national effort if we are to preserve our freedoms and interests. In that regard, Senator Reynolds made a very important point in her speech last week:

It is vital that we bring all of our sources of national power to bear on this problem, not just those of Defence.