If nothing can burn without oxygen then how is the Sun burning? – question from Shashikant Patil.

It’s true that here on Earth, if you want to burn something you need oxygen. But the Sun is different. It is not burning with the same kind of flame you would have on Earth if you burned a candle.

Have you heard of a nuclear reaction? It is a very powerful process that causes a lot of energy to be released. Well, inside the giant ball of gas that we call the Sun, a nuclear reaction is happening right now. 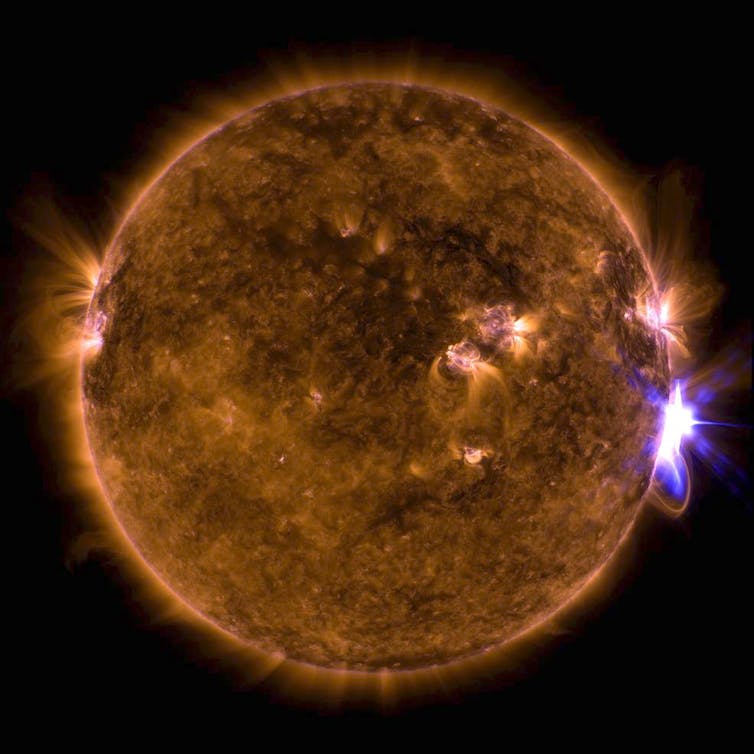 NASA’s Solar Dynamics Observatory captured this image of a solar flare – as seen in the bright flash on the right side – on Sept. 10, 2017. Credits: NASA/SDO/Goddard

This means light particles are smashing into each other very, very fast. They hit each other so fast and so hard they sort of glue together. This is what scientists call “fusion” and it can cause other elements and atoms to be created. All this activity causes a lot of energy to be released, which heats up everything near it.

The hottest part of the Sun is its core. The heat and light spreads out from the centre of the ball of gas toward the edges, and that’s what makes the Sun glow.

So there is no normal “flame” in the Sun – at least not like the flames we have in a fire here on Earth – because the energy and light and heat is coming from the nuclear reaction.

And because there’s no normal flame, you don’t need oxygen.

Read more: Curious Kids: why does the world store nuclear waste and not just shoot it into the Sun or deep space?

All this activity inside the Sun creates a lot of sound waves. So the Sun is loud and vibrates like a church bell.

The high temperatures inside make sound waves travel super fast and smash into each other, and that’s what causes the vibration. Solar quakes shake the Sun very ferociously. These can cause what we call “solar flares”, where a powerful burst of energy shoots out from the Sun.

Here’s a video of a solar flare that happened in 2017:

I am an astrophysicist fascinated by the vibrations of the Sun. I am searching to discover more quakes inside the Sun and other stars, too (after all, the Sun is just a star).

If you are interested in finding solar quakes, too, check out the pictures from NASA’s Solar Dynamics Observatory.

Read more: Curious Kids: Is there anything hotter than the Sun?