South Australia is a crucial step closer to becoming one of few places in the world to decriminalise sex work.

After 13 attempts in recent years, a bill for sex work law reform passed South Australia’s upper house – the Legislative Council. Next, the bill will head to the House of Assembly.

Current South Australian sex industry laws are outdated and law reform is desperately needed. As a sex worker and researcher of South Australia’s sex industry, I’ve found decriminalising sex work will not only allow us to conduct our work with more safety and dignity, it will also free us from the fear of police detection and heavy-handed police raids.

Read more: The stigma of sex work comes with a high cost

While an amendment to the bill was introduced, which allows police to enter anywhere commercial sex occurs if they suspect a crime has been, or will be, committed, the new bill still brings sex workers some relief from general policing.

Policing sex work prohibits sex workers from reporting crimes committed against them. In fact, many sex workers I interviewed for my research said they are more afraid of police detection and being charged or fined, than screening out dangerous clients.

You feel like there’s a slight concern that someone, a client might hurt you or something like that, there is absolutely no comparison to the fear that I have of the police. 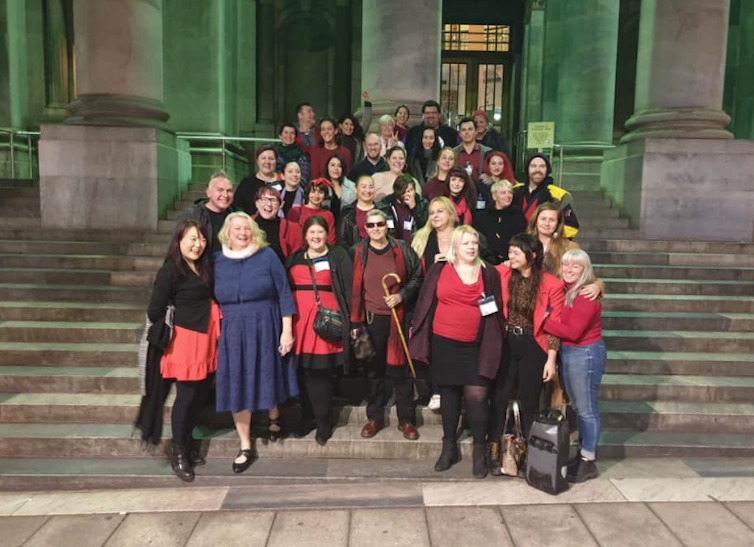 Supporters standing outside Parliament House during the second reading of the bill, June 5 2019. Author provided

What does the bill aim to do?

This bill aims to delete the term “common prostitute” from the Criminal Law Consolidation Act (1935) and Summary Offences Act (1953). It also removes common law offences relating to sex work, inserting the definition of “sex work” into the Equal Opportunity Act and adding clauses that will make it unlawful to discriminate against a person because they are, or were, a sex worker.

Read more: Sex workers are the experts on their profession – they must be heard in debates about its future

It amends the Return to Work Act to recognise commercial sexual services and employee/employer relationships like other industries.

And sex workers will also automatically come within the coverage of the Work Health and Safety Act once the bill passes, as it covers all forms of legal work and workplaces.

I first conducted interviews in 2015 and, during that year, only 36 sex work related charges were handed down.

Now, four years on, sex workers still have the same concerns about being charged, but fears have grown as law enforcement has become more heavy handed in how they apply the law.

For example, The Advertiser last year reported that in the 2017-18 financial year, 211 sex work related charges were laid by police.

One of my interviewees, a private worker, spoke about a raid she experienced in late 2017:

I was home alone. And it was the middle of the night, and this was about six months ago. And I had six men in casual clothes that were armed surrounding my house, bursting in and tearing the place apart. And I thought I’m getting robbed.

[…] I’m actually not even sure that they were cops […] because once they had torn my house apart and […] made a lot of disparaging remarks about me, and searched my house, and come up with nothing they left me with no report number, no file number, no calling card, no nothing.

They went through my bins, they checked me for track marks. They made remarks to each other whether I was worth my advertised rate in front of me.

And earlier this week, South Australian Police (SAPOL) were questioned during a parliamentary committee, and asked if their policing tactics are lawful.

For instance, SAPOL have been accused of raiding sex workers’ homes without showing warrants.

when SAPOL did not get their way and found that a decrim bill for sex work had passed the upper house, they actually raided brothels and used uncorrected, off the record Hansard from this parliament, from select committee proceedings, as evidence against those workers in those brothels, contrary to the parliament’s processes, contrary to good policing process.

Research has found criminalising sex work is futile as it fails to offer any solutions for the structural conditions, such as access to legal justice, that put sex workers at a disadvantage.

Read more: Ideological war against the decriminalisation of sex work risks sidelining much of the evidence​

But in South Australia, the majority of laws governing sex work have remained intact since they were enacted more than 50 years ago.

In fact, there are a range of offences aiming to prohibit sex work, the majority of which are contained in the Criminal Law Consolidation Act (1935) and Summary Offences Act (1953).

Common offences regarding sex work include: soliciting, procurement, keeping a brothel and “living on the earnings”. These laws also allow police to enter suspected brothels simply based on “suspicion”.

And public health research clearly demonstrates how criminalisation, including regulatory systems, put sex workers at further risk by leaving the majority of the industry working outside the law.

Decriminalisation is also supported by a number of respected international human rights organisations, such as Amnesty International, Human Rights Watch, the World Health Organisation and UNAIDS.

If this bill passes successfully, South Australia will lead by example, and show legislators that decriminalisation can be achieved.