Australia’s architectural historians have struggled to explain the “Sydney School” of nature-responsive modern houses built after the second world war. As well as arguing about whether any “school” existed, they also overlooked some of the movement’s pioneering designers and residences.

Read more: Building a nation: the state of play in Australian architecture

Wright’s Prairie houses (1906-09) ignited one side of modernism’s “great dialogue” about designing buildings either to harmonise with their natural surroundings or to appear superior – like abstract sculptures glistening above manicured lawns. At first he avoided painting his exteriors — in contrast to 1920s European modernists (led by Bauhaus School professors Le Corbusier, Walter Gropius, Marcel Breuer and Ludwig Mies van der Rohe).

They pioneered the “international style” of whitewashed masonry and steel-framed glass houses.

Sydney School residences were labelled “nuts and berries” because they exposed rustic materials like brick, timber and stone. This differentiated them from modern Sydney houses that were painted.

The argument of Sydney’s postwar organic versus international style usually has been exemplified by Peter Muller’s brick and timber Audette House in Castlecrag (1954), in contrast to Harry Seidler’s pristine white Rose Seidler House at Wahroonga (1950).

Architect Peter Muller talks about his design of the Audette house.

Muller became the most internationally successful architect from the Sydney School. He transferred Wright’s principles and his own Asia-Buddhist experiences to produce supra-romantic village resorts in Indonesia.

Read more: Reshaping Sydney by design – few know about the mandatory competitions, but we all see the results

Most Sydney architects didn’t take sides in the style war as starkly as Muller and Seidler.

They copied new ideas from America, Britain, Scandinavia and Europe and combined these with traditional Mediterranean, South American, colonial and Oriental concepts that were introduced to Sydney before the war.

In a 1948 article for Britain’s Architectural Review (AR), visiting English architect Ryan Westwood “looked in vain for something that might be called an ‘Australian’ architecture”.

inspiration has evidently sprung from Europe with latterly a crop of plagiarisms from California.

In AR’s September 1951 edition, Melbourne architect-critic Robin Boyd satirised the visual similarities of houses by Australian architects who were thought to be ideologically opposed. Boyd applauded signs of “a new eclecticism”. 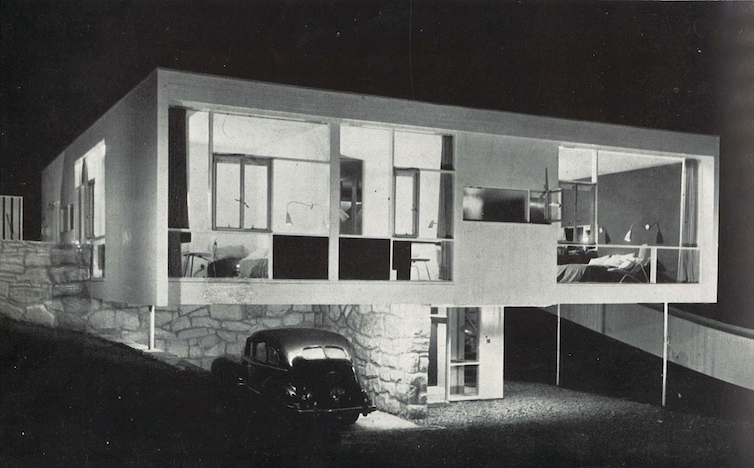 Magazines show that in the late 1940s and early 1950s (pre-television) many Sydney architects were planning houses around prominent fireplaces and chimneys that were hand-built with rough-hewn sandstone blocks. And most avoided the modern concept of flat roofs, which often leaked and were usually opposed by local councils and neighbours. 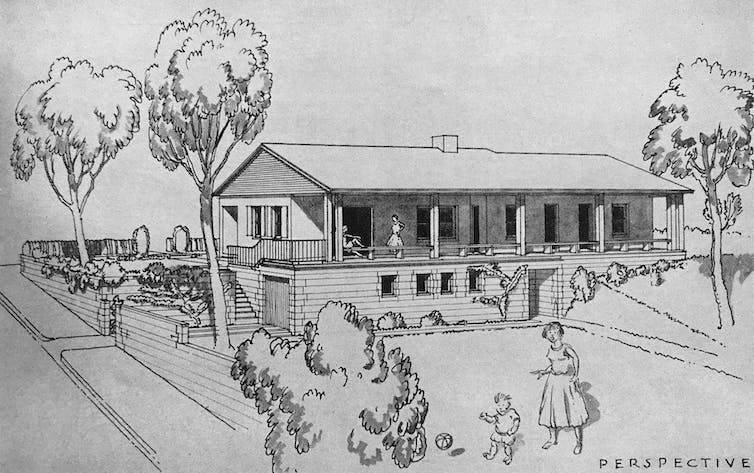 Sketch by Sydney architect John D. Moore for a practical suburban house that could be built for young families. Home Again! (1944) 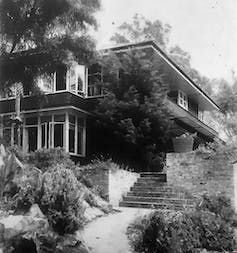 John Lander Browne’s organic house included one of Sydney’s first postwar flat roofs. Set high on a steep site, it was accessed via a garden path and sandstone steps leading up to large terrace. Both storeys were clad in dark-stained weatherboards, offset by white window frames. (This was a Swedish strategy that might have helped to refract Northern Europe’s faint sunlight indoors.)

The house featured in George Beiers’ 1948 book, Houses of Australia, and in Westwood’s AR article.

But Snelling’s brick, cedar and sandstone residences were strongly promoted in 1950s magazines. They deserve recognition now as pioneering contributions to the Sydney School. 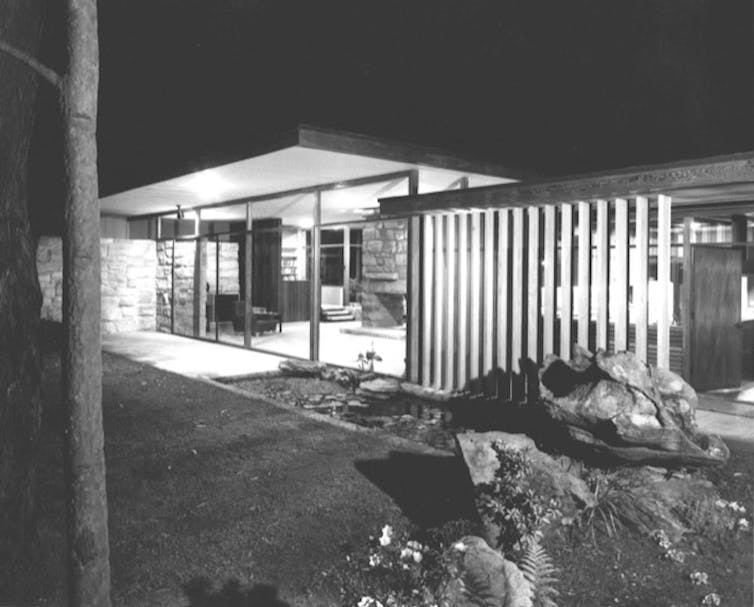 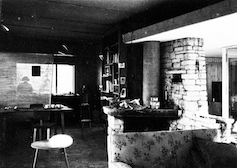 Another English architect, Derek Wrigley, built two modest homes for himself on steep sites at Dee Why in the late 1940s and early 1950s.

Today, he claims these reflected the Bauhaus teachings of his main design professor in Manchester. But old Sydney magazines show a Wright-style stone fireplace in Wrigley’s butterfly-roofed first house (OB1) and a California conical metal fireplace resting on a large rock projecting into the living room of his second residence (OB2).

Wrigley and Snelling both seem to have appreciated innovation, but they shared Wright’s basic alignment with nature. 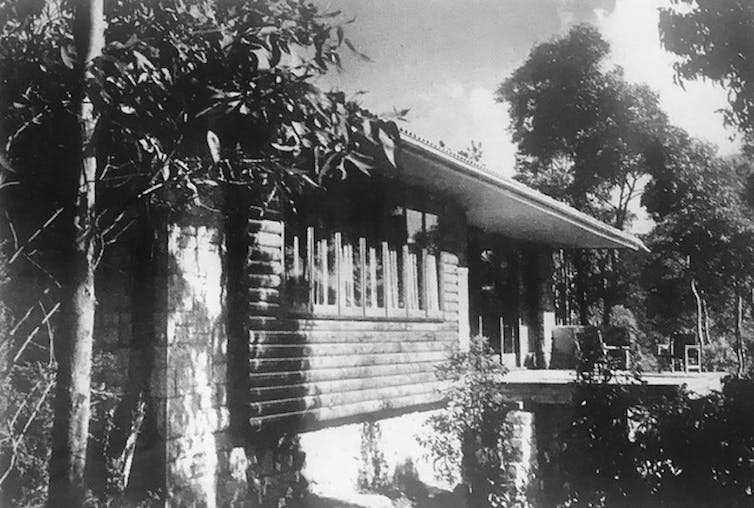 The heyday of the Sydney School was the mid-1950s to the early 1970s. During this time, younger Sydney architects were interpreting Wright’s followers in southern California and Scandinavia.

Wright died in 1959, causing the CIAM group leading the international style to disband. Then Wright’s greatest opponents, Le Corbusier, Gropius and Mies, died in the mid-to-late 1960s. And modernism moved on.

Many favoured face brick and stained timber and replaced flat roofs with canopies raked at unusual angles. Some also introduced a cross-sectional strategy of central staircases and staggered floor levels. Their houses were intended not merely to harmonise with their sites but to dramatise Sydney’s extraordinary topography and vegetation.

Where does Brutalism fit in?

There is one major conundrum involved in classifying modern Sydney houses built after the second world war. Does Brutalism belong to the Sydney School?

Brutalism was a deliberately crude and visually aggressive style of building with rough-cast, unpainted cement. It was pioneered by Le Corbusier and artist Jean Dubuffet after their 1945 visit to Switzerland, gathering artworks by patients in mental asylums.

Because concrete is made with natural substances (cement and water), it could be interpreted as another strand of the Sydney School’s emphasis on earthy materials.

But Brutalist architecture, as interpreted in late 1940s-1950s Scandinavia and Britain — and by Australians John Andrews and Colin Madigan in the 1960s and 1970s — was mostly limited to government buildings for education, administration, health care and public housing (notably the Tao Gofers-designed Sirius building at Circular Quay).

Sydney School historian Jennifer Taylor identified only one residence, by Tony Moore at North Sydney (1959), as being brutalist in style. Heritage architects from Docomomo now contradict her because Moore’s house was a romantic composition of bricks, timber and tiles. (Although concrete also could appear romantic, as demonstrated in the 1920s by Wright’s protegés, Walter and Marion Griffin, with their Knitlock houses at Castlecrag.)

Today’s specialist on Sydney Brutalism, Glenn Harper, has listed the Harry and Penelope Seidler house in Killara (1966-67), the Hugh and Eva Buhrich House 2 in Castlecrag (1968–72), the Peter Johnson House in Chatswood (1963) and the Bill and Ruth Lucas House in Castlecrag (1957) as examples of Brutalism (although the steel and glass Lucas house and the brick, timber and tile Johnson house did not emphasise concrete, while several all-concrete “60s spaceship” houses by Stan Symonds are often ignored).

Intriguingly, most of the few Sydney houses that have been labelled Brutalist were designed by architects for their own occupation.

It was difficult to persuade aspirational clients to pay for architecture that British theorist Reyner Banham, in a 1955 AR article, recognised for “precisely its brutality – je-m’en foutisme, its bloody-mindedness”.

Read more: Brutalism, a campus love story – or how I learned to love concrete