Menstrual symptoms including pain, heavy bleeding and low mood may be linked to nearly nine days of lost productivity per woman every year, according to a new study published in the British Medical Journal this week.

The researchers evaluated lost productivity associated with menstrual symptoms, as measured by time off from work or school (absenteeism) and working or studying while feeling ill (presenteeism), in 32,748 Dutch women between the ages of 15 and 45.

While just under 14% of respondents said they had taken time off from work or school during their periods, more than 80% said they had continued to work or study while feeling unwell, and were less productive as a result.

These findings tell us we need to better recognise the impact menstrual symptoms are having on women.

We recently reviewed the literature and found that globally, almost three-quarters (71%) of adolescents and women under 25 reported having period pain.

Period pain (dysmenorrhoea) is perhaps the most common symptom associated with menstruation. It’s characterised by pain in the lower abdomen that usually occurs just before or during the first few days of a woman’s period. Period pain can be mild for some women, but more severe, and even debilitating, for others.

Primary dysmenorrhoea is the most common type of period pain and is mostly caused by changes in hormone-like compounds called prostaglandins, which are responsible for the cramping feeling many women report during their period.

Secondary dysmenorrhoea occurs when pain is caused by an underlying problem in the pelvis, such as endometriosis or adenomyosis.

Missing class and missing out

In our research, one in five young women (20%) reported missing school or university due to period pain. Two in five (41%) said pain affected their concentration or performance in class.

Many of these young women run the risk of falling behind during their final years of schooling – a crucial time in their academic lives. 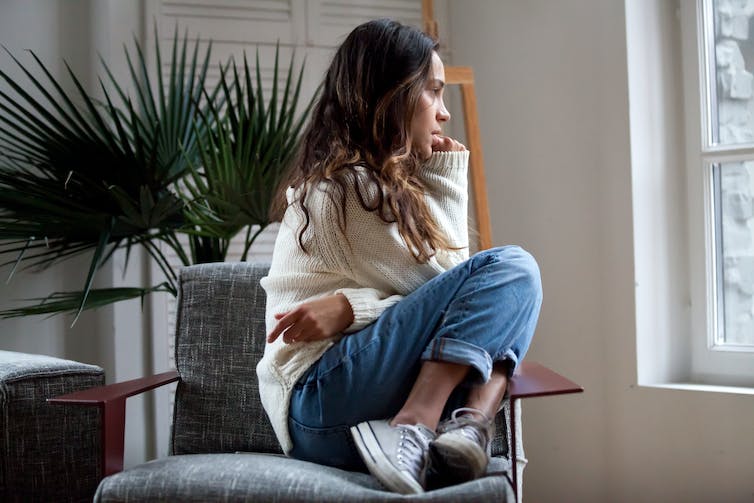 More than 70% of adolescents and young women up to 25 experience period pain. From shutterstock.com

Women in our research also missed social activities, other school activities and sporting activities because of their menstrual symptoms. This is concerning as social interaction and participation in physical activity are important for good health, particularly during adolescence.

Just part of being a woman?

Many women think of period pain and other menstrual symptoms as “normal”. They don’t always recognise that their pain may be a health problem, and often believe it’s just something they need to “put up with”.

So most young women use self care to manage the pain themselves rather than seeking medical care. This is likely due to a variety of factors, including not discussing menstruation because of social or cultural taboos, a lack of quality education on menstruation, feeling dismissed by medical professionals, or the pain occurring for so long it just becomes “normal”.

While mild pain or discomfort could be seen as part of a “normal” menstrual cycle, if pain or any other menstrual symptoms are enough to prevent normal activities such as going to school or work, it’s important to go and speak to your doctor.

Moderate to severe period pain alone doesn’t necessarily mean you have a condition like endometriosis, but it’s likely that something can be done to help reduce the impact of your pain.

Read more: I have painful periods, could it be endometriosis?

There is a range of effective treatments for period pain, although there’s no “one-size-fits-all” approach that works for every woman. Some women may require multiple strategies to get their pain and symptoms to a level that doesn’t impact their daily lives.

Non-steroidal anti-inflammatories such as ibuprofen, and to a lesser extent the oral contraceptive pill, can be effective in treating primary dysmenorrhoea. Both treatments carry the risk of side effects, so should be discussed with a doctor.

Paracetamol, despite being commonly used for period pain, doesn’t appear to be particularly effective.

There’s some evidence that heat and regular physical activity can help. Heat seems to work best if used when pain is present, whereas exercise, such as yoga, is better if it’s done regularly throughout the month.

Several programs in Australia and New Zealand have been designed to help young people better understand the menstrual cycle. These include programs aimed at early adolescents, either at home or school.

The content of school-based programs varies but includes topics such as what a “normal” menstrual cycle looks like and how to identify symptoms that might indicate more serious conditions. Importantly, these programs generally target boys too, which should help reduce the stigma around discussing periods.

Read more: Cups, lingerie and home-made pads: what are the reusable options for managing your period?

Whether at school, university or in the workplace, menstrual symptoms cause absenteeism and presenteeism among a significant proportion of women. We need to break down barriers that prevent open discussion of periods, so women of all ages feel they can discuss any period-related problems with their boss, teachers, family or doctor.

Secrecy and shame around periods can prevent access to effective health care. Ensuring menstruating women of all ages have the information they need to choose the best way to manage their pain and symptoms is vital.