One of the major considerations when creating an ongoing television series is its “story world”, made up by its place, people, themes, style and tone. Central to this world is the setting, known in television writing as the “hub” or “precinct”, which serves the need for constant generation of characters and storylines.

With its high turnover of criminals, and the pressure-cooker effect of locking up many characters within the same walls, a prison is a particularly useful story hub for a TV drama series. The Melbourne-set and produced series Wentworth, now in its seventh season on Foxtel in Australia, is a good example of how this can work.

Wentworth reimagines cult show Prisoner, bringing together cold killers, pretty criminals and correctional officers – some of them also corrupt – in the one space. With a series of “top dogs” ruling the roost - from fiery mum Bea Smith (Danielle Cormack) to vigilante leader Kaz Proctor (Tammy Macintosh) – personalities clash, friendships and relationships evolve, and death threats, set-ups and escape attempts are frequently made.

TV series are often called “returning series”, usually because the setting plays such a vital role in structuring the story. Each week we come back to the same village, hospital, police station or school to see how the characters react to new challenges.

For prison dramas such as Wentworth, mostly the characters do not so much return as remain. Confined within cells, rec rooms, canteens and exercise yards, characters find themselves creating their own dramas, defining their own hierarchies, and of course dreaming up ways to get out (legally or otherwise).

Writers can introduce new characters at any time – for any crime – and mainstay characters can be dispatched with little narrative contrivance, because the prisoners’ lack of control over their own movement is a given. 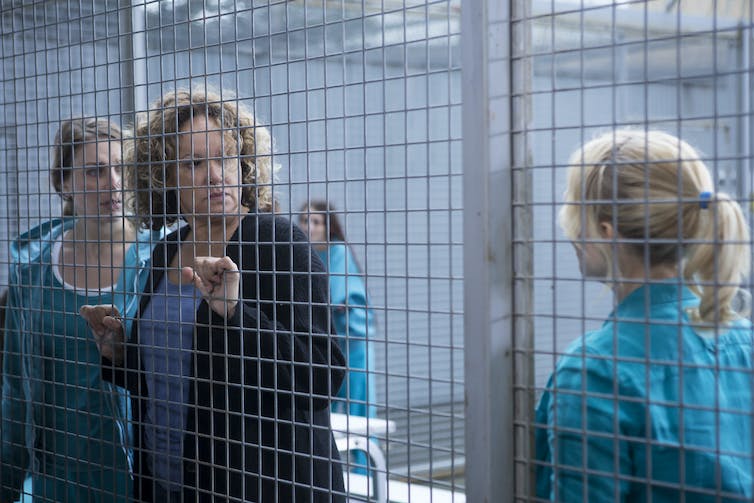 Kate Jenkinson, Leah Purcell and Susie Porter in Wentworth. The enclosed space of a women’s prison is ripe with potential for new characters and conflict. Sarah Enticknap

Many TV series creators have explored the possibilities of detention as a story hub, generating shows such as Porridge (1974-77), Prison Break (2005-17) and most recently Orange is the New Black (2013-present). Mostly shot in a few indoor spaces, prison stories are cheaper to produce than many other scripted television series.

Characters in Wentworth have much at stake in each encounter. From eating breakfast to exercising in the yard, they may lose their freedom, social position, familial ties and even their lives. The prison corridor can readily become a place for compassion or conflict, solidarity or rioting.

Queueing to use the public telephone, where we typically see teary connections with loved ones, can easily slip into hierarchical games among the inmates, and sometimes violence. Because of the setting, the extreme stakes and emotional power of melodrama are never far from the surface.

Wentworth’s story hub is distinctive, because it brims with women. Wentworth Correctional Centre is a (fictional) social space constructed primarily by and for women. This allows for a variety of female identities and experiences to be played out.

As part of a global movement to better represent women on screens (and behind the scenes), including Screen Australia’s Gender Matters program, this show is very timely. Not only does it increase representation of women on screen, it also demands a greater breadth of female characters simply because all of the inmates – and the majority of the staff – identify as female. Women are Governors and “Top Dogs”, the brutalised and the perpetrators.

All of these character types, backgrounds and motivations come together within the powerful female world of Wentworth. In the first season, the prison functions as a magnetic narrative force, drawing the characters towards their incarcerated state. The causes of their custodial sentences are dramatised via flashbacks, so we see their various positions in society before they become levelled as prisoners. 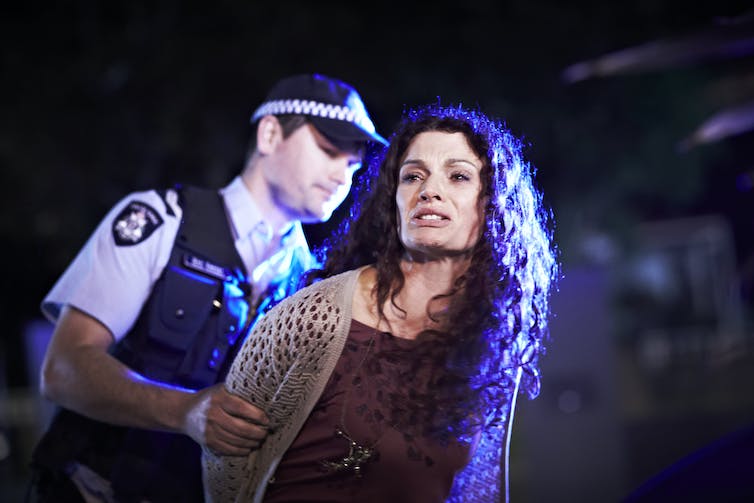 Danielle Cormack as Bea in Wentworth. The first season of the show looks at how the characters ended up in prison. Fremantle Media/Foxtel

In later seasons, the prison functions as a kind of decentralising force as the narrative follows selected characters trying to establish new lives on parole. For example, Liz Birdsworth (Celia Ireland) is released to a halfway house, where she must deal with violence and theft; and inmate Franky’s (Nicole da Silva) attempt to establish a legal career after her release is told over two seasons.

The sheer number of female characters also demands diversity: there are women of various ages, ethnicities, social classes, body shapes, genders, religions and sexualities. This creates a world in which social norms, power dynamics and gender categories can be disrupted and challenged. 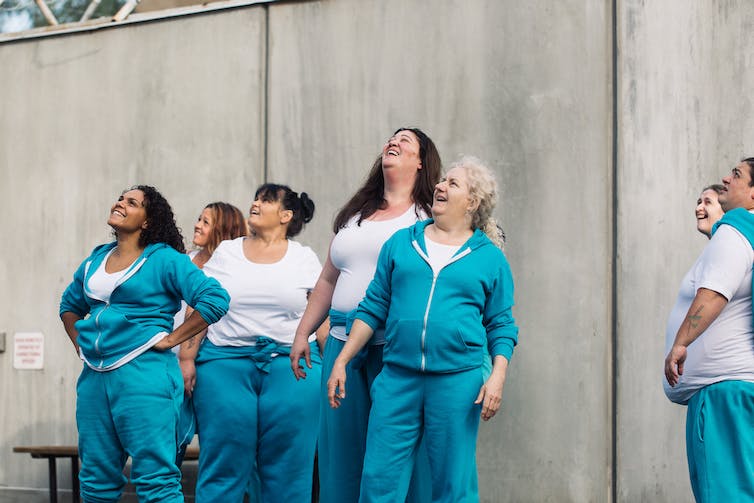 With a cast largely made up of female characters, Wentworth represents a diversity of women. Freemantle Media/Foxtel

Many of the central characters in Wentworth are lesbian or bisexual. When Franky and her psychologist Bridget develop a strong relationship in season three, for example, the forbidden couple became a fan favourite tagged “Fridget”.

The frequency of representing taboo and marginalised sexualities is a major contributing factor in the enduring appeal of women-in-prison stories.

But the prison of this television series is still an imaginary world, where characters and stories are played for the tastes and thrills of mainstream audiences, rather than to compassionately illuminate the experiences of the 43,000 Australians who live in our prisons. Although Wentworth features more major Indigenous characters than the average Australian television series (the current season features two Indigenous Australian main characters in an ensemble of ten), it still fails to adequately represent or address the horrifically high rate of Indigenous incarceration here.

Wentworth has been praised elsewhere as “a striking example of how to make strongly dramatic, addictive TV using a confined setting”, in a series that is “dark, tense and fully female-centric”.

Inbuilt with drama, rivalries, collusions, hierarchies and forced interactions between characters, Wentworth epitomises how a TV series is not just haphazardly set somewhere, but rather how its precinct can be pivotal in supplying all the necessary elements of drama.

By placing women at the centre of the narrative, Wentworth’s female-centric world also creates opportunities for real industry change.