Most people expect hospital treatment to make them better. But for some, a stay in hospital can actually make them sicker. Their wound might get infected after an operation or they might get a blood infection as a result of a medical procedure.

Our study, published today in the international journal Antimicrobial Resistance and Infection Control, found one in ten adult patients in hospital with an acute (short-term) condition had a health care associated infection.

In the first study of its kind in Australia for over 30 years, we also uncovered unexpected infections, like pneumonia and urinary tract infections, as well as high numbers of patients with multi-drug resistant organisms (superbugs).

Why do we need to keep track of infections?

Most of these infections can be prevented. So it is important to know what type of infections they are, how common they are and which patients get them. Once we have this information, we can work out a way to prevent them.

Most hospitals in Australia have ongoing surveillance for specific infections, such as wound and bloodstream infections.

Some states have well coordinated programs like the Victorian program VICNISS, leading to detailed data on health care associated infections. This data is then used to inform hospital strategies on how to prevent infections. However, this type of surveillance method requires extensive resources and does not capture all infections that occur in a hospital.

Instead, we conducted a “point prevalence” survey, which takes a snapshot of the current situation on any given day. This is less resource intensive than ongoing surveillance and it provides valuable information on the distribution and occurrence of all infections in a hospital.

Read more: Some private hospitals are safer than others, but we don't know which

In Europe, the European Centre for Disease Prevention and Control co-ordinates national point prevalence studies every four years. These have provided valuable insight into the burden of health care associated infections. They have also been used to track the emergence of multi-drug resistant organisms in Europe. The US, Singapore and many other countries also run them. 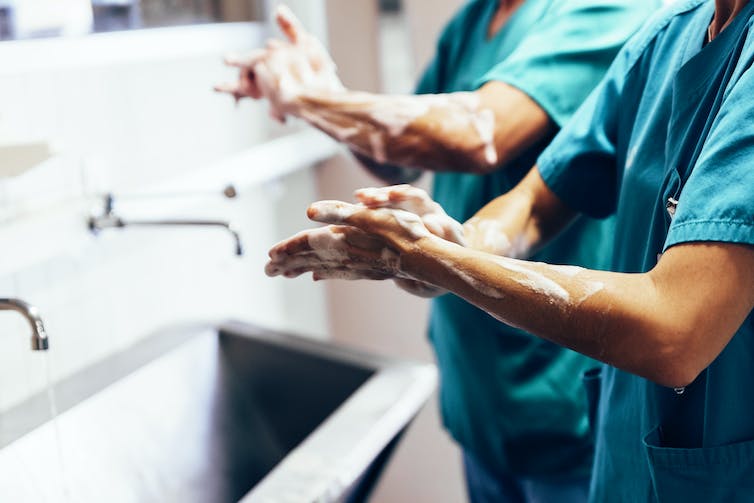 Most hospital infections can be prevented. Santypan/Shutterstock

Unlike most OECD countries, Australia does not have a national health care associated infection surveillance program and does not undertake national point prevalence studies.

The only national data routinely collected relates to bloodstream infections caused by the microorganism Staphylococcus aureus. These infections are serious but rare and only represent a tiny fraction of all infections in hospitals.

To improve our understanding of health care associated infections across Australia, we used the same study method as the Europeans. Over a four month period in 2018, we visited 19 large hospitals across Australia and collected information on all infections in adult acute inpatients. Four of the hospitals were regional, the others major city hospitals.

What infections did we find?

Of the 2,767 patients we surveyed, we found 363 infections in 273 patients, meaning some patients had more than one infection. The most common infections were wound infections after surgery (surgical site infections), pneumonia and urinary tract infections. These accounted for 64% of all the infections we found.

This is important as most hospitals do not normally look for pneumonia or urinary tract infections and there is no routine statewide or national surveillance for these.

Our findings mean these infections are commonly occurring but undetected. A potential source of information on these types of infections is hospital administrative coding data. However, these codes were mainly designed for billing purposes and have been shown to be unreliable when it comes to identifying infections.

We also found patients with a medical device, such as a large intravenous drip, or urinary catheter (a flexible tube inserted into the bladder to empty it of urine), were more likely to have an infection than those who did not.

What have other studies found?

For the first time in 34 years we have a glimpse of how common health care associated infections are in Australian hospitals. Although the only other previous study was larger, a major strength of our study is that we used the same two trained data collectors to collect the data from all hospitals.

This reduced the potential inconsistency in finding infections that might occur if hospital staff collected their own data. It also minimised the use of hospital resources to undertake the survey.

Importantly though, we did not survey all types of hospitals. It is possible that if the same survey was extended to include children, babies and cancer hospitals, higher rates of infection may be found given the vulnerability of these patients.

What can we do better?

As one of the authors has previously noted, a major gap in Australia’s effort to combat health care associated infections, and the emergence of multi-drug resistance organisms, is the lack of robust national data.

This means we cannot measure the effect of national policy or guidelines despite significant investment.

In the absence of a national surveillance program, we recommend that large-scale point prevalence surveys, including smaller hospitals, specialist hospitals and the private sector be undertaken regularly. Data generated from these studies could then be used to inform and drive national infection prevention initiatives.