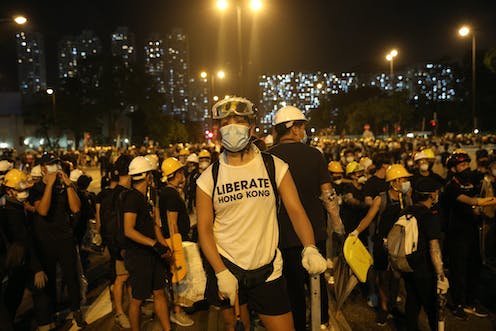 As China grows more powerful and influential, our New Superpower series looks at what this means for the world – how China maintains its power, how it wields its power and how its power might be threatened. Read the rest of the series here.

China is known for the strict control it exercises on information, especially online. Discussion of events that might reflect unfavourably on the government is often censored, or framed in such a way that it becomes pro-government propaganda.

That’s why so many Chinese citizens remain unaware of, for example, the 1989 Tiananmen Square massacre.

Online discussion of the recent protests in Hong Kong against a now-suspended extradition bill was no different. But this was also a rare occasion when China’s news propaganda machine was mobilised to simultaneously target several audiences both inside and outside China.

China’s propaganda network is made up of a constellation of domestic and international news outlets. They span social media, mobile apps, websites and traditional media.

The news is tailored to particular audiences according to different agendas. Everything, however, comes under the direction of the Central Publicity (formerly translated as “Propaganda”) Department of the Chinese Communist Party.

Over the past few weeks, we’ve seen the China extradition bill elevated from a local Hong Kong controversy to a story of international concern following the protesters’ lobbying campaign targeted at the G20 summit.

As events escalated from peaceful rallies focused on a single issue to at times violent confrontations seeking a range of demands, including the resignation of Hong Kong Chief Executive Carrie Lam, the agendas of several spheres of China’s propaganda converged.

Here’s how it unfolded.

The first day protesters took to the streets was March 31. That was two days after the extradition bill was published in the Gazette, the official publication of the Hong Kong government.

The same day, two Chinese-language newspapers that have long acted as de-facto official media of the Chinese government in Hong Kong (but not openly declared as such) swung into action.

Wen Wei Po and Ta Kung Pao both used either the entire or the majority of the second pages in the news sections to proclaim the merits of the bill. They also, to a lesser extent, attacked the bill’s opponents.

These outlets are on the semi-periphery of China’s propaganda machine, targeting a local audience in Hong Kong. They cannot ignore negative news about China or the Beijing-endorsed Hong Kong government, despite the fact China has co-opted most traditional media outlets in Hong Kong in recent decades. They seek instead to counter it with a positive spin while discrediting opposing voices.

Their messages were reinforced by relatively new digital media outlets in Hong Kong that are supportive of the Chinese regime. These outlets form the periphery of China’s propaganda in the city and focus a great deal of coverage on bashing the government’s perceived enemies.

After the extradition bill was published, outlets like the Silent Majority of Hong Kong and Hong Kong G Pao pumped out positive propaganda stories about it and the Hong Kong police and negative propaganda about the opponents of the bill.

One of the three articles, published by the Silent Majority of Hong Kong on May 31, for example, attacked the publisher of the Apple Daily Newspaper, one of few media outlets in Hong Kong that is openly critical of Beijing, for the “nonsense” he expressed that the bill would harm press freedom.

The articles employed the outlet’s usual tactics: singling out individuals and pitching them against the interests of society. Silent Majority also encourage readers to “like” their stories, forming supportive public opinion while helping the news to spread.

The core news propaganda outlets of the Chinese state, such as People’s Daily, and CCTV, didn’t address the Hong Kong protests until April 17, more than two weeks later.

These outlets target the domestic audience inside mainland China, and as such, tend to ignore stories like this on sensitive subjects or those that paint the party in a bad light.

The mission of core state media is to foster a positive image of China, either for a domestic or international audience. Usually this involves reporting on China’s achievements. When China comes under pressure, the core media attempt to justify the government’s actions as reasonable.

The establishment of a group in Hong Kong that supported the extradition bill gave the online edition of the People’s Daily an opportunity for positive propaganda on April 17. One story read, in part:

The group calls on citizens to participate in a signature petition organised by it to support the passage of the amendment bill, so as to improve the legal system and demonstrate justice and avoid Hong Kong becoming a place for criminals to evade legal responsibility.

Targeting an international audience, the English-language China Daily dismissed concerns about the bill in an editorial on April 29, the day after the second protest against it. Part of it read:

…the opposition camp and its foreign backers have gone to great lengths to present scary scenarios the amendments could lead to in order to garner support for their own political agenda.

Then, on July 1, a group of protesters occupied Hong Kong’s legislative chamber. The action drew strong and extensive statements of condemnation from China’s core propaganda outlets in the following days.

The rule of law in Hong Kong cannot be challenged.

Resolutely support the SAR Government in pursuing serious violations of the law.

Attack on HK legislature a ‘political act’ with ‘hidden agenda’.

Why language matters in coverage, too

This involves using different language. The news about the extradition bill in China’s core propaganda outlets is full of statements from official state agencies and other organisations that are supportive of the bill. The language is formal and repeats stock phrases, including:

The same stock phrases are supplemented by more accusatory words in the semi-peripheral layer of China’s news propaganda, including:

Some of the digital-only outlets on the periphery, operating in the clickbait-driven online environment, show little restraint in using abusive, colloquial language, such as by calling opposition politicians “scoundrels.” They sometimes also fake facts and doctor images to attack opponents. This differentiates them from the traditional news media, which follow journalistic principles more closely.

Studying China’s core state media alone overlooks the complementary way each layer of the propaganda machine works with the others. Using different communication tactics in different spheres, each outlet reinforces the others to create a coherent world view.

What they have in common, though, is an adherence to the main party line – and with this, the party hopes to control the message on the Hong Kong protests, even as it struggles to control the streets.

Hiu-long Chu, a Masters student of Social Work at the Australian College of Applied Psychology, contributed to this report.