The role Australia played in relaying the first television images of astronaut Neil Armstrong’s historic walk on the Moon 50 years ago this July features in the popular movie The Dish.

But that only tells part of the story (with some fictionalisation as well).

What really happened is just as dramatic as the movie, and needed two Australian dishes. Australia actually played host to more NASA tracking stations than any other country outside the United States.

Read more: How big is the Moon? Let me compare ...

Our geographical location was ideal as US spacecraft would pass over Australia during their first orbit, soon after launch. Tracking facilities in Australia could confirm and refine their orbits at the earliest possible opportunity for the mission teams.

To maintain continuous coverage of spacecraft in space as the Earth turned, NASA required a network of at least three tracking stations, spaced 120 degrees apart in longitude. Since the first was established in the US at Goldstone, California, Australia was in exactly the right longitude for another tracking station. The third station was near Madrid in Spain.

Australia’s world-leading place in radio astronomy was another factor, having played a key role in founding the science after the second world war. Consequently, Australian engineers and scientists developed great expertise in designing and building sensitive radio receivers and antennas.

While these were great at discovering pulsars and other stars, they also excelled at tracking spacecraft. When the CSIRO Parkes radio telescope opened in 1961 it was the most advanced and sensitive dish in the world. It became the model for NASA’s large tracking antennas. 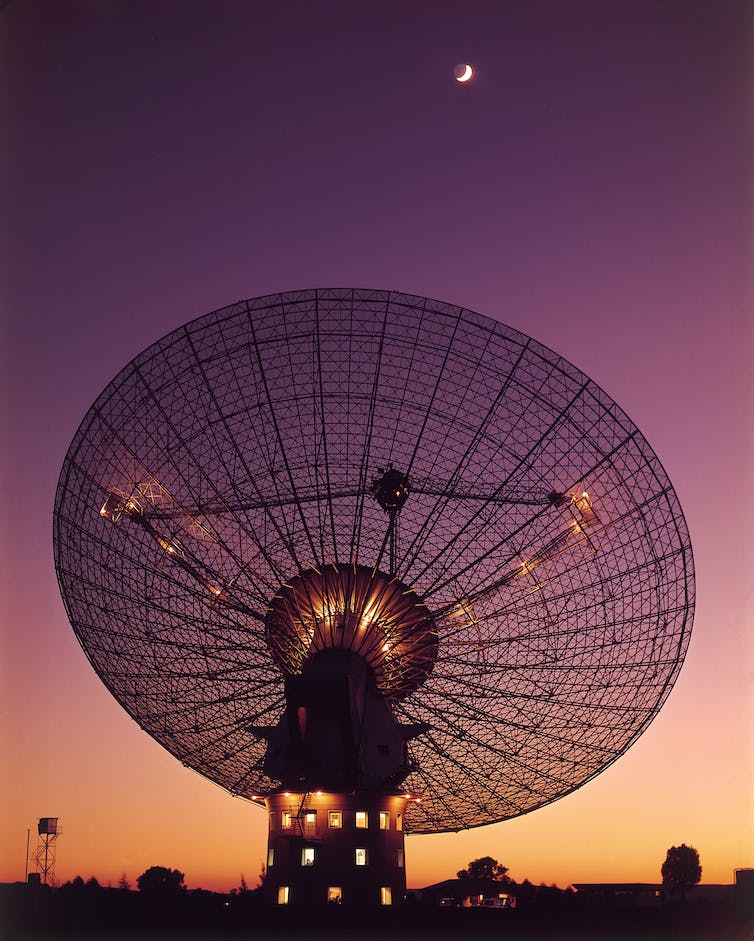 The Parkes dish with Moon in 1969. CSIRO, Author provided

The dish you need is at Honeysuckle Creek

NASA invested a considerable amount in its Australian tracking facilities, all staffed and operated by Australians under a nation-to-nation treaty signed in February 1960.

For human spaceflight, the main tracking station was at Honeysuckle Creek, near Canberra. Its 26-metre dish was designed as NASA’s prime antenna in Australia for supporting astronauts on the Moon. 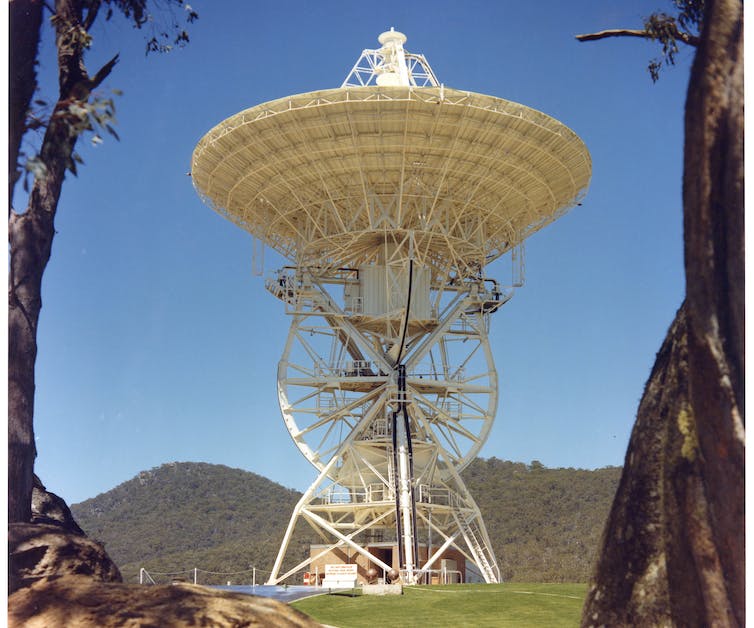 NASA’s nearby Deep Space Network station at Tidbinbilla also had a 26-metre antenna but with a more sensitive radio receiver. It was called on to act as a wing station to Honeysuckle Creek, enhancing its capabilities, and ultimately tracked the orbiting command module during Apollo 11.

Over in Western Australia, Carnarvon’s smaller 9-metre antenna was used to track the Apollo spacecraft when initially in Earth orbit, as well as to receive signals from the lunar surface experiments.

To augment the receiving capabilities of these stations, the 64-metre Parkes radio telescope was asked to support Apollo 11 while astronauts were on the lunar surface. The observatory’s director, John Bolton, was prepared to accept a one-line contract:

The Radiophysics Division would agree to support the Apollo 11 mission.

The decision to broadcast the first moonwalk was almost an afterthought.

Originally, the tracking stations were to receive only voice communications and spacecraft and biomedical telemetry. What mattered most to mission control was the vital telemetry on the status of the astronauts and the lunar module systems.

Since Parkes was an astronomical telescope, it could only receive the signals, not transmit. It was regarded as a support station to Honeysuckle Creek, which was also tasked with receiving the signals from the lunar module, Eagle.

When the decision was made to broadcast the moonwalk, Parkes came into its own. The large collecting area of its dish provided extra gain in signal strength, making it ideal for receiving a weak TV signal transmitted 384,000km from the Moon, using the same power output as two LED lights today.

On Monday, July 21 1969, at 6.17am (AEST), astronauts Neil Armstrong and Buzz Aldrin landed the Eagle lunar module on the Sea of Tranquillity.

‘The Eagle has landed.’

It occurred during the coverage period of the Goldstone station, while the Moon was still almost seven hours from rising in Australia.

The flight plan had the astronauts sleeping for six hours before preparing to exit the lunar module. Parkes was all set to become the prime receiving station for the TV broadcast.

This changed when Armstrong exercised his option for an immediate walk – five hours before the Moon was to rise at Parkes. With this change of plan, it seemed the moonwalk would be over before the Moon even rose in Australia.

But as the hours passed, it became evident that the process of donning the spacesuits took much more time than anticipated. The astronauts were being deliberately careful in their preparations. They also had some difficulty in depressurising the cabin of the lunar module.

Meanwhile, moonrise was creeping closer in Australia. Staff at Honeysuckle Creek and Parkes began to hope they might get to track the moonwalk after all – at least as a backup to Goldstone in the US.

The weather at Parkes on the day of the landing was miserable. It was a typical July winter’s day – grey overcast skies with rain and high winds. During the flight to the Moon and the days in lunar orbit, the weather at Parkes had been perfect, but this day, of all days, a violent squall hit the telescope. 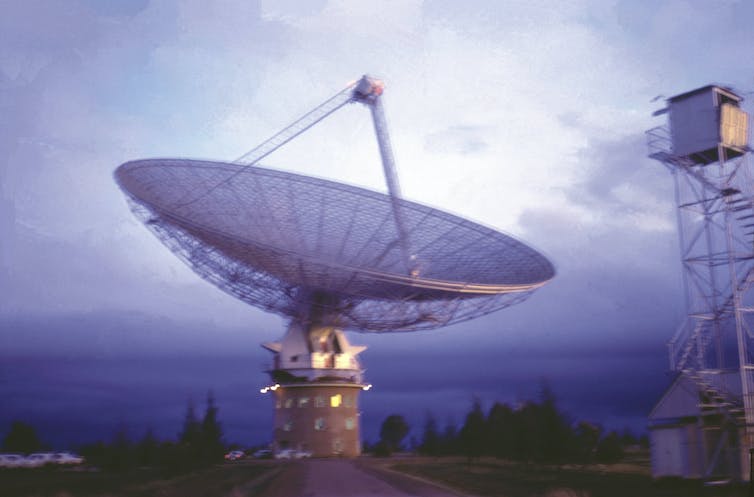 The Parkes radio telescope with the passing storm that almost stopped the dish from broadcasting the images from the Moon. CSIRO/David Cooke, Author provided

Still, the giant dish of the Parkes radio telescope was fully tipped down to its 30-degree elevation limit (the telescope’s horizon is 30 degrees above the true horizon), waiting for the Moon to rise in the north-east.

As the Moon slowly crept up to the telescope’s horizon, dust was seen racing across the country from the south. The dish, being fully tipped over, was at its most vulnerable, acting like a huge sail.

The winds picked up and two sharp gusts exceeding 110km/h struck the large surface, slamming it back against the zenith angle drive pinions that controlled the telescope’s up and down motion. The control tower shuddered and swayed from this battering, creating concern in all present.

The atmosphere in the control room was tense, with the wind alarm ringing and the 1,000-ton telescope ominously rumbling overhead.

Fortunately, as the winds abated, the Moon rose into the field-of-view of the telescope’s offset receiver, just as Aldrin activated the TV at 12.54pm (AEST). It was a remarkable piece of timing. 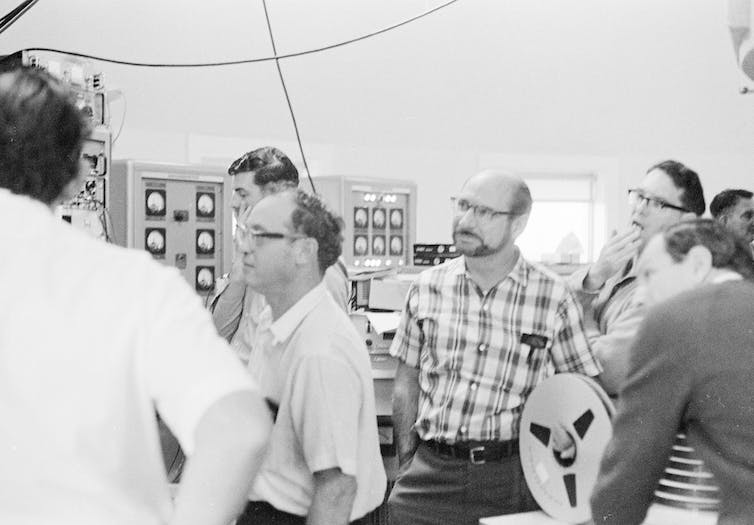 The 64m antenna at Goldstone, the 26m antenna at Honeysuckle Creek and the 64m dish at Parkes all received the signal simultaneously.

At first, NASA switched between the signals from Goldstone and Honeysuckle Creek, searching for the best-quality TV picture.

After finding Goldstone’s image initially upside down and then of poor quality, Houston selected Honeysuckle’s incoming signal as the one used to broadcast Armstrong’s “one giant leap” to the world.

You can listen to the conversations between the Australian and US teams as Armstrong’s first step on the Moon was captured by Honeysuckle Creek (at 2'39") and Aldrin’s descent was captured by Parkes (at 21'30").

Eight minutes into the broadcast, at 1.02pm (AEST), the Moon finally rose high enough to be received by Parkes’ main, on-focus receiver. The TV quality improved, so Houston switched to Parkes and stayed with it for the remainder of the two-and-a-half hours of the moonwalk, never switching away.

Honeysuckle continued to concentrate on their main task of communications with the astronauts and receiving that vital telemetry data. 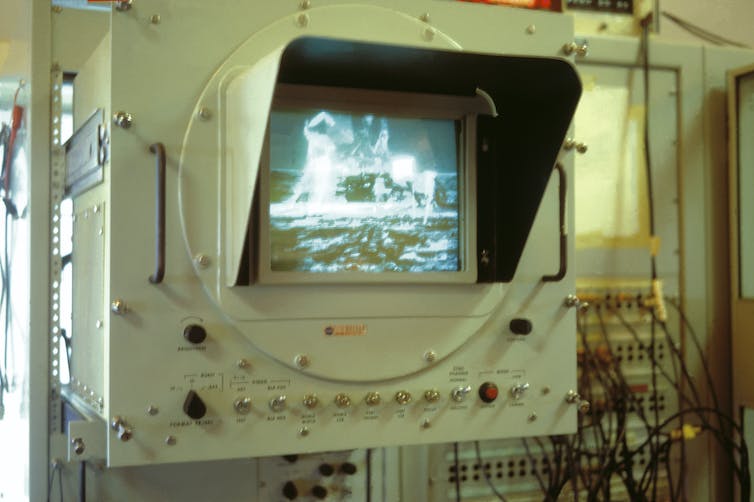 A close-up shot of the monitor showing the moonwalk signal from Apollo 11 as it happened. CSIRO/David Cooke, Author provided

Throughout the moonwalk, the weather remained bad at Parkes. The telescope operated well outside safety limits for the entire duration. It even hailed toward the end, but there was no degradation in the TV signal.

The moonwalk lasted a total of 2 hours, 31 minutes and 40 seconds, from the time the Eagle’s hatch opened to the time the hatch closed.

In Australia, the Apollo 11 feed was split. One feed was sent to NASA mission control for broadcast around the world. The other went directly to the ABC’s Gore Hill studios, in Sydney, for distribution to Australian TV networks.

As a result Australians watched the moonwalk, and Armstrong’s first step through Honeysuckle, just 300 milliseconds before the rest of the world.

Read more: We need to protect the heritage of the Apollo missions

The success of the Apollo 11 mission was due to the combined effort, dedication and professionalism of hundreds of thousands of people in the United States and around the planet.

Australians from Canberra to Parkes, remote Western Australia to central Sydney played a critical role in helping broadcast that historic moment to an awestruck world. 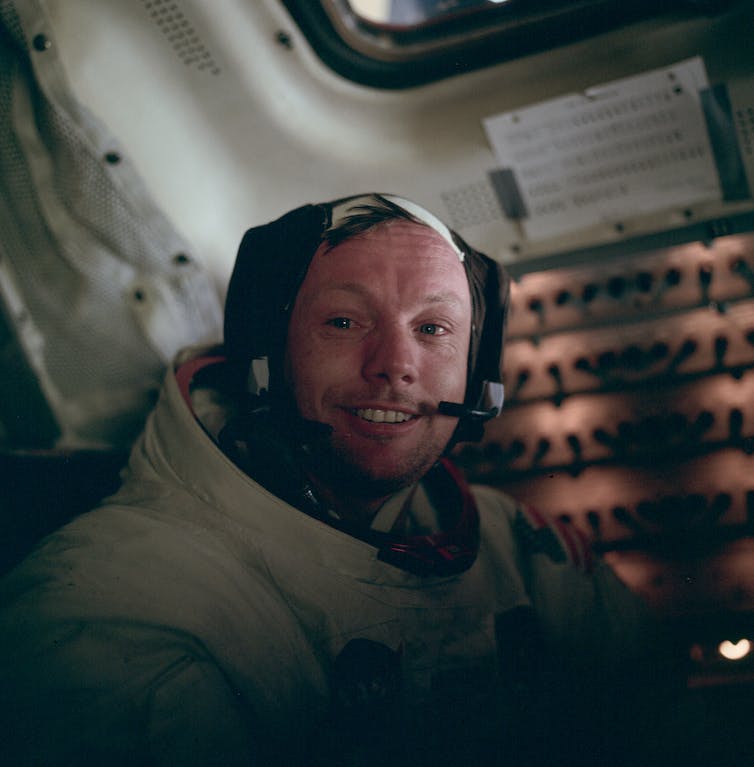 Apollo 11 commander Neil Armstrong back inside the lunar module on the Moon after the moonwalk. NASA

You can hear more about the Moon landing in our special podcast series, To the Moon and beyond.