One of the Coalition government’s first priorities in the new parliament is the passage of its Ensuring Integrity Bill, aimed at tightening regulations on unions and union officials.

Similar legislation was introduced in 2017, but rejected in the Senate. This time around, the government is more optimistic of its chances, given the current makeup of the Senate after the May election and the recent controversy over John Setka, the Victorian state secretary of the Construction, Forestry, Mining, Maritime and Energy Union (CFMMEU).

The bill would give the minister for industrial relations, as well as the Registered Organisations Commission and any party deemed to have “sufficient interest”, the power to apply to the Federal Court to deregister a union. Union officials are particularly concerned about the extension of this power to anyone with “sufficient interest,” as this could conceivably include employers.

The disqualification of union officials would also be automatic for anyone who has committed serious criminal offences punishable by five or more years of jail time. In addition, the Federal Court could disqualify officials for breaking industrial laws or failing to stop their organisation from breaking the law, or otherwise not being a “fit and proper person.”

A public interest test would also be introduced to prevent future union mergers, such as the “super union” merger last year of the Construction, Forestry, Mining and Energy Union (CFMEU), the Maritime Union of Australia (MUA) and the Textile, Clothing and Footwear Union of Australia (TCFUA).

In introducing the bill, Christian Porter, the attorney-general and industrial relations minister, made clear that the newly named CFMMEU was one of the bill’s main targets.

He noted that the union had been levied with penalties over A$16 million for more than 2,000 contraventions of industrial law in recent years.

This repeated lawbreaking, particularly in our vital building and construction sector, hampers the delivery of goods and services and increases the cost of vital infrastructure projects like roads, schools and hospitals.

Setka was recently convicted after pleading guilty to harassment of his then-estranged wife. Earlier, he was accused of saying at a CFMMEU executive meeting that Rosie Batty’s campaigning against domestic violence had led to a reduction in men’s rights. However, this account has been contested by Setka and others present at the meeting.

undermines the credibility of the trade union movement through the position he holds and the public views he’s expressed.

Sally McManus, the Australian Council of Trade Unions secretary, also urged Setka to consider the harm he was doing the union movement and resign.

There is no place for perpetrators of domestic violence in leadership positions in our movement.

Setka has often attracted negative media attention. He famously threatened to expose all Australian Building and Construction Commission (ABCC) inspectors and make their children “ashamed of who their parents are.” On social media, he posted a picture of his children holding a placard saying “go get fu#ked” in reference to the ABCC.

Setka is a major contributor to the CFMMEU’s numerous breaches of industrial law. He has numerous convictions for theft, assault and criminal damage, mainly associated with industrial disputes.

Former Prime Minister Bob Hawke is reported to have previously counselled Labor leader Bill Shorten to sever the ALP’s ties with the CFMMEU. 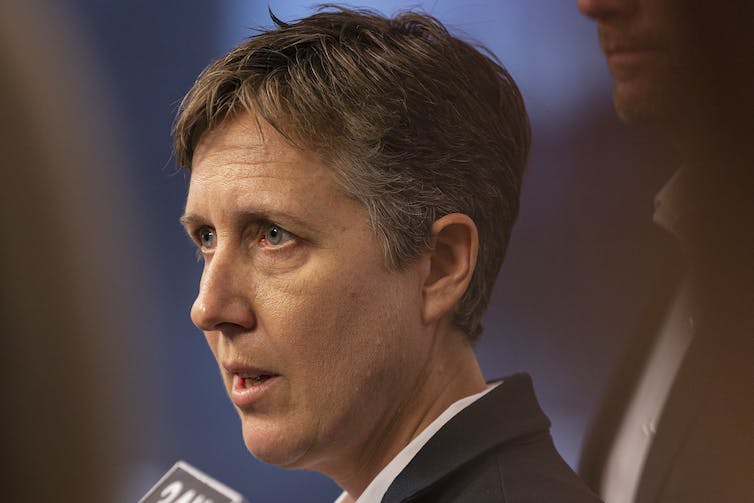 ACTU secretary Sally McManus has faced calls to resign over her handling of the Setka controversy. Daniel Pockett/AAP

Labor’s fears may be realised

The government is relishing the difficulties this situation has created for Albanese and Labor.

Government members have previously highlighted that the CFMMEU is Labor’s biggest electoral donor. And Porter has challenged Albanese to back the Ensuring Integrity Bill after his condemnation of Setka:

Now is the time for Mr. Albanese and Labor to prove they’re not all talk and back their words with action.

Albanese’s swift call for Setka’s expulsion from the ALP was designed to limit damage to the party. However, Setka’s court challenge prevented a quick expulsion, and now it appears it could be blocked altogether.

Read more: Setka furore opens division within the labour movement – and there is no easy solution

In addition to the Ensuring Integrity Bill, the government has reintroduced a bill that would impose tighter regulatory controls on workers’ entitlement funds.

According to the bill’s language, it would prevent the “coercion” of employers to pay into particular funds for their employees’ superannuation, training or insurance. This bill also would require registered organisations (unions and employer bodies) to maintain financial management plans, keep credit card records and disclose their loans and grants to individuals or other entities.

The Ensuring Integrity Bill has been referred to a Senate committee, which is due to report in October.

The bill should have an easier time passing in the new Senate. Independent Senator Tim Storer, who strongly opposed the 2017 bill, is no longer in the Senate. Of the crossbench, Cory Bernardi and the two One Nation senators are likely to support it. That leaves only one more vote required from either of the Centre Alliance senators or Jacqui Lambie. 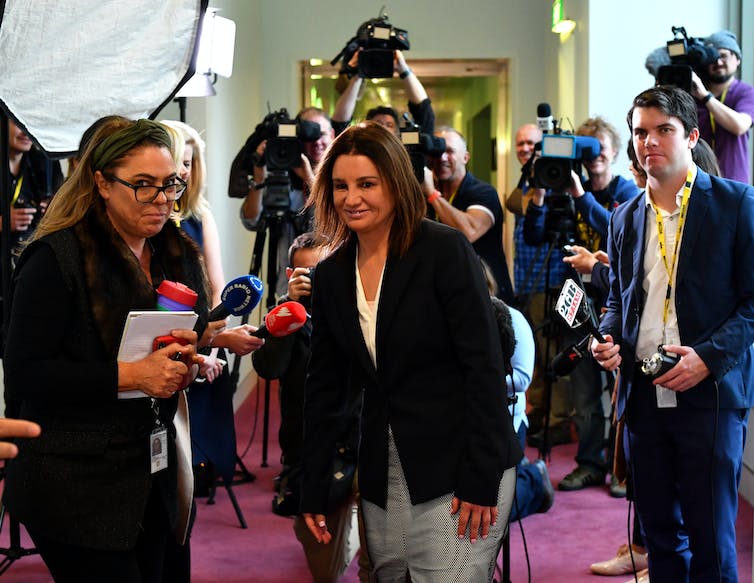 Jacqui Lambie has emerged as a key crossbench vote on taxes, unions and other bills in the new Senate. Sam Mooy

The bill has been somewhat watered down from its 2017 version to make it amenable to the crossbench and test Labor’s opposition to it.

It also more closely follows the provisions of the Corporations Act. However, questions remain as to whether membership-based organisations like unions should be expected to operate like corporations, or if unions breaching industrial laws should be treated similarly to corporations or individuals breaking criminal laws.

The ACTU is lobbying Senate crossbenchers to oppose the bill.

The UK-based International Centre for Trade Union Rights has also come out against the bill, arguing it is “incompatible” with Australia’s commitments under two key conventions of the International Labour Organisation. The ICTUR says it interferes with workers’ rights to establish their own organisations, set their own rules and elect officials, saying it found

no precedent for the degree of state interference in the functioning and establishment of trade unions in comparable industrialised liberal democracies.

It also compared the bill to oppressive legislation in Turkey and under the military dictatorship in Brazil in the 1940s.