As I watched my hunting dog standing off the lead and lined up with all the other Kleiner Münsterländers, awaiting her turn to swim out and bring back the dead duck (an important training item) thrown into the deep water, I felt a sense of pride.

It dawned on me that people may not always be the best teachers for dogs. Her desire to fit in was evident as she echoed the behaviour of the dogs around her. Unfortunately, that echoing had also become evident on daily walks with a crew of less well-trained dogs.

Let me be clear: I am not a hunter. While living in Denmark, under advice from locals and looking for a dog that was smart and a little challenging, I stumbled upon the Kleiner Münsterländer breed, originally bred in Münster in western Germany as a medium-sized hunting and family dog.

They are smart and fast, and the one I ended up with, Clara, was described as “hard-headed” and a natural leader. But that somewhat euphemistic description left me completely unprepared for the challenges ahead. 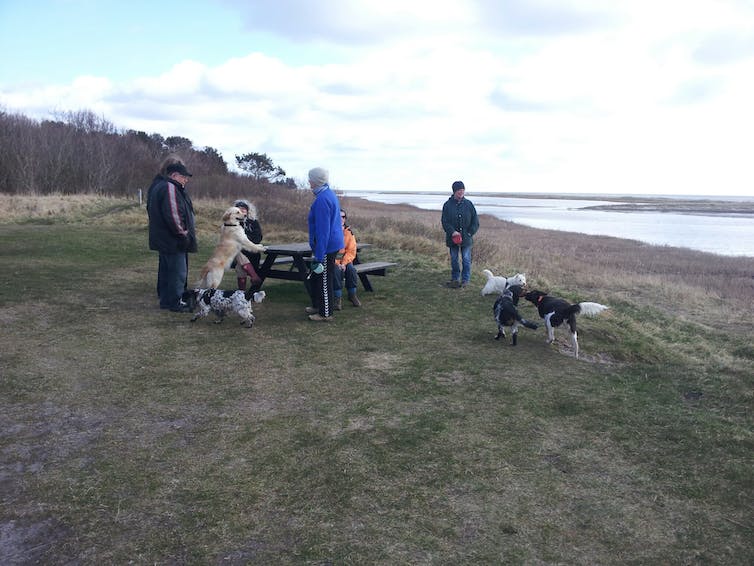 It’s easy to learn bad behaviours; note the dog on left about to jump onto a table. @anmore

This dog was not like the loyal, steadfast, obedient Labradors I knew. This one was wilful, always looking to take the reins, always challenging me to think up new ways to interact, new games to play, new things to learn, new ways to do things. For example, I gave her a reward so she would drop the rubbish she had picked up. Her response was then to deliberately retrieve more rubbish to get more rewards.

Meanwhile, my research involved designing a set of vibrating and tactile vests that people could wear to help them relax, and that inactive people could use to become energised. The vests were part of a larger European Union-funded project, CultAR, involving various technologies designed to help tourists to navigate around cultural sites in Padua, Italy. As such the vests signalled when and which way to turn, and when to stop on arrival.

Testing a vibrotactile vest for directions and stopping.

I wondered whether similar research could be used to help dogs who were ageing, deaf or blind to continue exercising, but still be safe. Or even my dog, who understood Danish commands but not English ones when we were about to move to an English-speaking country. We set up a series of experiments to see whether dogs would easily receive and process commands if they were presented as vibrations, rather than as verbal commands.

We tried testing “vibrotactile” commands on dogs, but the already trained ones has little use for yet another system of commands, and my dog was too sensitive to bear the vibrating sensations.

The Kleiner Münsterländer hunters were far tougher when training their dogs than I wanted to be with mine. At the extreme end, they used archaic methods such as shock collars or isolating their dogs in cold rooms. In dog training, as in parenting, I believe punitive measures to enforce obedience should give way to more modern ideas about ensuring well-being and creating a bond of affection and enjoyment with the handler, owner or trainer.

In addition, as a researcher, I was just as interested in what my dog could teach me. She was undeniably smart and I could learn a lot from her navigation skills alone. So I began looking at how to incorporate her intelligence into her learning and training program in a way that would enrich both of our qualities of life.

We tried a socialisation school. With it came a whole new set of leads, commands and ceremonies. Clara adjusted, although I could see she loved to be with her own breed. Kleiner Münsterländers are all a variation of each other; they become slightly mesmerised in each other’s company.

At a family Christmas in New Zealand, I bumped into Mark Vette, who trains animals for film and television, has worked with the celebrated animal behaviour researcher Marc Bekoff and even ran a program to teach rescue dogs to drive – yes, really. I was inspired to find other ways.

We moved to Australia in early 2017, and there was a lot to adjust to. Summers were far hotter than Denmark; indoors in winter was much colder. There was new language, new smells, different dogs to meet, and different landscapes to explore – no more dog parks in forests! 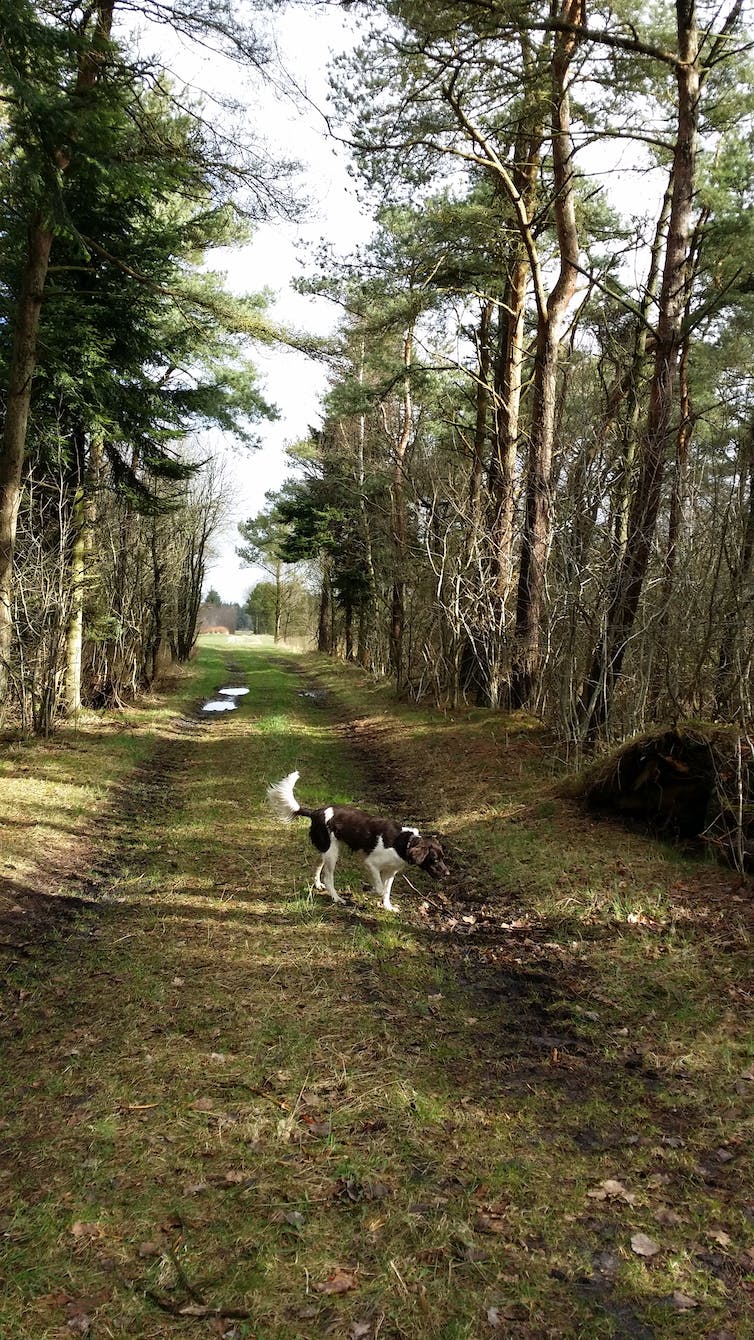 Walking in the forest in Denmark – in the regions, the dog parks are usually large forested areas. @anmore

Again, too, our training involved a new set of leads, commands and ceremonies. This time we were in a pack with leaders (both canine and human) where the dogs (and the main trainer) were perceived as alphas, or leaders (wolves). Some methods involved negative reinforcement: giving the dogs an unpleasant experience to prevent them repeating that behaviour.

By now we had tried three different methods of dog training, each with their own failings. For example, my dog would be bored easily with repetitive acts, or we did activities that were not particularly useful or relevant in our daily lives, or she simply complied out of fear, but this was not the relationship I wanted to foster. Something began to dawn on me: the failings were ours, not the dogs’.

We might get frustrated with our dogs for not following our commands, but we are just as likely to let them down by getting distracted or being inconsistent in our reactions to particular behaviours. The dog is only trying to make sense of what we communicate, so if we give them mixed messages – perhaps by only responding to their barks if we’re not in the middle of something else more pressing – then confusion and stress ensue.

Read more: Are you walking your dog enough?

If consistency is the key, and the failure to be consistent is ours, what can we do to be more consistent and help our animals to live a stress-free life? Perhaps it is us who need a wearable vibrating device to remind us to stay on cue.

A small buzz on the wrist could “train” us to be more vigilant and attentive to our dogs, in situations where they are trying desperately to tell us something. (“There’s someone coming towards the house – I’d better keep warning my owner, more loudly this time, as I don’t think she’s heard me yet…”)

Wearables could also help alert us to the small but telltale signs of stress in our dogs: ears pinned back, hard focus of eyes, stiffening of body, and so on.

We already have a plethora of devices to help stave off boredom and loneliness for animals who are left at home alone for long hours. Maybe there’s a market for devices that ease our dogs’ stress when we’re hanging out with them too.