Indian tiger numbers are up, according to one of the most detailed wildlife surveys ever conducted. Tiger populations have risen by 6%, to roughly 3,000 animals.

Read more: Tigers confirmed as six subspecies, and that is a big deal for conservation

Large, solitary predators hate being seen. They owe their entire existence to being able to avoid detection by prey and sneak close before attacking.

Hence, when we want to count tigers, the tigers don’t help. But accurate population numbers are fundamental to good conservation. Every four years since 2006, the Indian government conducts a national census of tigers and other wildlife.

The efforts the project team undertakes to derive the tiger population estimate are nothing short of phenomenal: 44,000 field staff conducted almost 318,000 habitat surveys across 20 tiger-occupied states of India. Some 381,400 km² was checked for tigers and their prey.

(There is an application in with the Guinness Book of World Records to see if this is the largest wildlife survey ever conducted anywhere in the world.)

The team placed paired camera traps at 26,760 locations across 139 study sites and these collected almost 35 million photos (including 76,523 tiger and 51,337 leopard photos). These camera traps covered 86% of the entire tiger distribution in India. Where it was too dangerous to work in the field (14% of the tigers’ distribution) because of political conflict, robust models estimated population numbers. 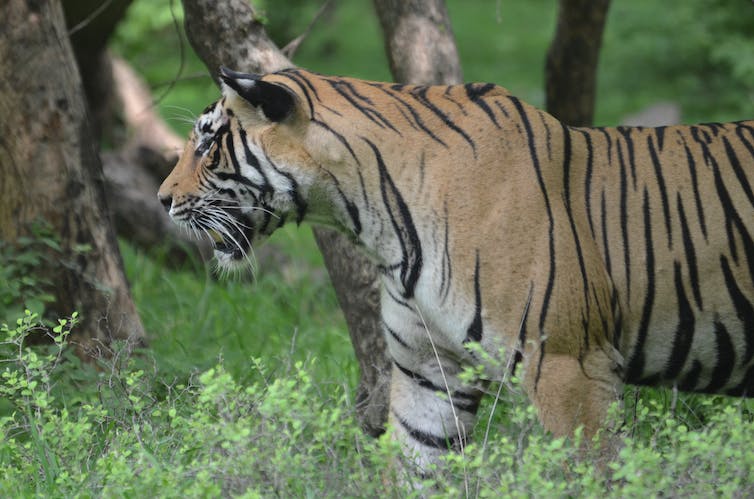 Millions of photos were analysed to create an accurate count of India’s tiger population. Author provided

Collecting this volume of data would be an utter waste of time if it were poorly analysed. The teams took advice from some of the world’s foremost experts to sort the photos: pattern matching experts who could identify whether a photo of a tiger taken in the monsoon matched that of a tiger taken in the dry season while walking at a different angle, machine learning experts to speed up species identification, and spatial analysis experts to estimate the populations of tigers and their prey.

The research team took this advice and coupled it with their own knowledge of tiger ecology to develop a census that is unique among large carnivore studies.

We were fortunate enough to be among the non-Indian scientists invited to review this process. Peer review is a crucial part of any scientific endeavour, and especially important as early Indian tiger surveys were notoriously unreliable.

So how did they do? A total of 2,461 individual tigers older than one year of age were photo-captured. The overall tiger population in India was estimated at 2,967 individuals (with an error range of roughly 12%).

Out of this, 83.4% were estimated from camera-trap photos, and the rest estimated from robust modelling. Tiger numbers have increased by 6% per year, continuing the rate of increase from the 2014 census. This is a wonderful success for Indian conservation efforts.

However not all is rosy. There has been a 20% decline in areas occupied by tigers in 2014 to today, although tigers have moved into some new areas (some 8% of their Indian range is new). The coordinators of the tiger survey – Yadvendradev Jhala and Qamar Qureshi – conclude that while established and secure tiger populations in some parts of India have increased, small, isolated populations and those along corridors between established populations have gone extinct.

This highlights the need for conservation efforts to focus on improving connectivity between isolated populations, while incentivising the relocation of people out of core tiger areas, reducing poaching and improving habitat to increase prey resources.

This will be no easy task with India’s burgeoning population, but investment from private sector tourist corporations in land acquisition along corridors and the creation of community conservancies could supplement government funding for expanding protected corridors.

Read more: Curious Kids: why do tigers have whiskers?

The success of India’s census has led the governments of Nepal and Bangladesh to employ the same project team to help estimate their own tiger populations. These methods can – and should – be employed for other iconic, charismatic species that can be individually identified, such as jaguars in South and Central America; leopards, cheetahs, and hyenas in Africa, and possibly even quolls in Australia.

This article was co-authored by Chris Carbone, Senior Research Fellow at the Zoological Society of London.