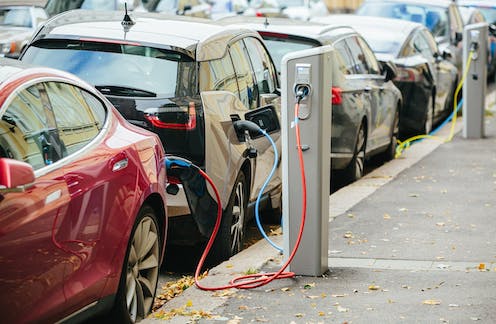 The New Zealand government has proposed new fuel standards to cut greenhouse emissions, along with consumer rebates for cleaner cars – paid for by fees on high-polluting cars.

The long-awaited proposed changes would bring New Zealand in line with most other developed countries; apart from New Zealand, Russia and Australia are the last remaining OECD nations without fuel efficiency standards.

New Zealand’s long tradition of not regulating its car market, combined with substantial indirect subsidies for private cars, makes addressing emissions from the transport sector both challenging and highly significant.

Land transport emissions – the single largest source of fossil carbon dioxide in New Zealand – grew 93% between 1990 and 2017. There are multiple causes. The population grew 44% during this period, mostly through immigration. The car ownership rate also grew rapidly, partly due to economic growth and deficiencies in public transport in the main cities. Car ownership in New Zealand is now the highest in the OECD and there are more motor vehicles than adults.

Fuel efficiency improved only slowly over this period, before stalling in recent years: at 180g CO₂/km, the emissions of newly imported vehicles in New Zealand are 50% higher than in Europe. Because of the lack of a fuel efficiency standard, importers provide less efficient versions of their bestsellers to the New Zealand market. Of the ten bestselling new vehicles, five are utes (which also benefit from a fringe benefit tax exemption, four are SUVs and one is a regular car.

In addition, half of all vehicles are imported secondhand, mostly from Japan. They are cheap, but less efficient than newer models. Emissions, and congestion, are likely to continue rising as the national vehicle fleet is increasing by 110,000 vehicles a year.

One bright spot in the present situation is the emergence of an electric vehicle segment, mostly driven by the availability of cheap second-hand Nissan Leafs from Japan and the construction of a fast-charging network by a private company. Although sales have stalled in the past year at a market share of 2%, there are now 15,000 electric vehicles in New Zealand. (Australia has around 10,000 electric vehicles.)

New Zealand does not have a strong record of taxing “bads”. The only goods subject to excise taxes are tobacco, alcohol and fuel. The fuel tax is moderate by international standards. Over the past decade, the fuel tax has been fully allocated to road construction and maintenance.

New Zealand has an emissions trading scheme. The current carbon price of NZ$25/tonne of carbon dioxide adds five cents per litre to the price of fuel. Clearly, any likely increases in the carbon price are not going to be enough to change car buying decisions. Research shows that consumers tend to focus on upfront costs, while underestimating future fuel and maintenance costs.

Despite that, a special Auckland fuel tax of 10 cents per litre that co-funds public transport investment provoked a brief but intense backlash from the public. Plans to extend the scheme to other centres were canned.

The proposed fuel efficiency standard would require car importers to either meet it or pay a fine. The suggested standard is 150gCO₂/km in 2021, falling to 105gCO₂/km in 2025, with further falls thereafter. There are more than 3000 car importers in New Zealand, so this could prompt a major shakeup, including possible price adjustments.

The standards are similar to those proposed by the Australian Coalition government in 2016, which have not yet been taken any further. Internationally, fuel efficiency standards cover 80% of the light vehicle market.

Read more: Australians could have saved over $1 billion in fuel if car emissions standards were introduced 3 years ago

But the second component of the proposal, the clean car discount, has attracted more attention. Cars emitting less than the current threshold would received a discount, initially up to NZ$1800 for an efficient petrol car, up to NZ$4800 for a hybrid and up to NZ$8000 for a battery electric car. Cars costing more than NZ$80,000 would not receive a discount.

Known as a “feebate scheme”, those rebates would be paid for by increased fees for high-polluting cars, of up to NZ$3000. The amounts are designed so that the entire scheme would be revenue neutral to the government. Modelling suggests that the proposed standard and discount combined would save motorists NZ$12,000 over the life of a vehicle.

There is international experience with similar schemes, and they have been broadly effective. France has been operating a “feebate” scheme since 2008 with periodic adjustments. New Zealand’s proposed scheme is similar to the French and Swedish schemes.

But there is also room to get it wrong. Tinkering with electric vehicle incentives has led to wild sales fluctuations in the Netherlands and Denmark.

The spread between tested and real-world fuel use has widened, up from 9% in 2001 to 42%. The new Worldwide Harmonised Light Vehicle Test Procedure testing cycle, currently being adopted by Japanese and European manufacturers, is believed to be more representative of real-world fuel use, as is the test already in use in the United States.

But overall, the New Zealand proposal has been received positively by car makers and across political parties.

One possible weakness is that it is entirely based on carbon dioxide. Other pollutants, including nitrous and sulphur oxides and particulate matter (soot), that are responsible for most of the immediate health impacts of vehicle pollution and are worse in diesel than in petrol vehicles, are not targeted. Nor are the underlying subsidies to the car-based transport system, which make a transition to active and public transport more difficult.

Any decisions made now will have impacts for decades to come. Switching the fleet to electric is different from just switching to more fuel-efficient cars. It involves new charging infrastructure and some behavioural changes from the public, and these challenges (rather than simply cost) are stumbling blocks worldwide to more rapid adoption.

These arguments have persuaded many countries to bring in electric vehicle incentives beyond simply targeting carbon dioxide. Norway is a famous example, where electric vehicles avoid purchase taxes and market share is already 60%. The UK has recently exempted electric company cars from fringe benefit tax.

As the global market share of electric vehicles still stands at only 2%, eight years after they became widely available, and the number of fossil-fueled vehicles is increasing by 48 million a year, stronger action on vehicle emissions is clearly needed worldwide.