The annual Thoroughbred breeding season starts on September 1, and timing is crucial because foals born early in the season have an advantage when that official birth date rolls around the following year. The more mature they are at the start of the two-year-old racing season, the better they will cope with the demands of the sport.

But there is quite a process involved in producing a Thoroughbred foal, and it requires a range of departures from natural horse reproduction.

Read more: The success of Winx shows the value of symmetry in race horses

Last year it was estimated more than 14,000 foals were born in Australian stud farms. To match that this year, it’s about to get extremely busy at those farms around the country.

If the mare has recently raced, she will be “let down”. This involves her gaining weight and developing a normal oestrus (reproductive) cycle, which can be disrupted by the demands of racing.

The mare is housed during the winter months under artificial lighting that mimics the increasing day length of spring. This tricks her body into cycling much earlier in the year than would otherwise be the case.

Before mating (called covering), the mare’s oestrus cycle will be monitored by observing her behaviour and performing a rectal ultrasound examination. This allows the veterinarian to view her ovaries and determine how close she is to ovulation. Ovulation can be manipulated by the administration of hormones.

Mares generally have a 21-day cycle, during which seven days are spent in active oestrus, when the mare will accept a stallion, followed by a period of dioestrus during which she is unreceptive.

In the wild, the mare usually initiates mating by approaching the stallion and performing a range of courtship behaviours before allowing him to cover her multiple times a day during her receptive period.

In the wild, there is a courtship between a mare and a stallion before she allows him to cover her. Paul McGreevy/Wes Mountain/The Conversation

But at the stud, the aim is to achieve conception on the first covering. This saves time and money for mare owners and the stud.

Most Thoroughbred studs rely on a “teaser” stallion to perform courtship behaviour and elicit telltale signs of oestrus in mares. Teasers are usually ponies, who are too small to physically mate with the mares.

Mares who aren’t ready to breed may respond aggressively, so it’s the teaser’s job to take the heat instead of the stud’s valuable stallions, who may command service fees in the hundreds of thousands of dollars.

When the mare is ready to be mated, she will be brought to the covering shed. Her perineal area (that includes the vulva) will be washed and her tail will be bandaged or shaved to protect the stallion’s penis from injury should it get caught in the hairs during mating.

To prevent injury to the stallion and to facilitate an efficient covering, the mare will be fitted with equipment designed to restrict her behaviour during mating.

To minimise kicking, she may be fitted with breeding hobbles or boots that limit the movement of her hind legs. A breeding cape protects her neck from bites during copulation. 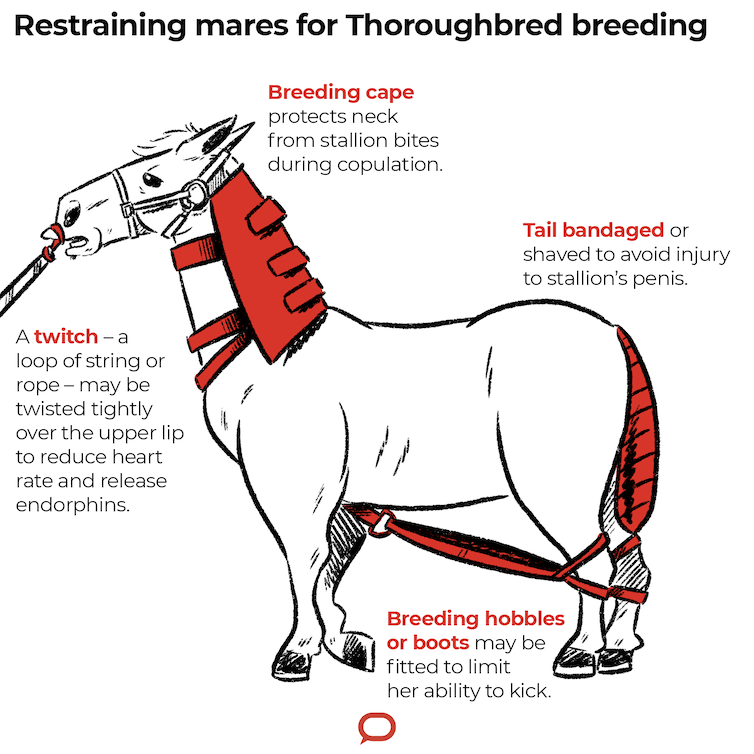 Wes Mountain/The Conversation, CC BY-ND A device known as a twitch may be used as an additional form of restraint. This is a loop of string or rope that is twisted tightly around the upper lip, causing a temporary reduction in heart rate and the release of endorphins that induce calmness in the mare. Preparing the stallion Popular Thoroughbred stallions may cover three mares per day, seven days a week during the season, which runs from September 1 to December 31 each year. Unlike in the wild, most domestic stallions lead solitary lives in stables or small paddocks due to concern about injuries and aggressive behaviour. Recent evidence shows that stallions can safely live in groups when not breeding mares. The stallion will be fitted with a bridle to enhance control. Experienced stallions may develop an erection when they see or smell the bridle due to forming an association between the appearance of the bridle and covering mares soon afterwards. Let’s get mating Left to themselves, the stallion takes time to investigate the mare with a range of pre-copulatory behaviours, such as licking or nipping her perineal region, face and flanks and inhaling the scent of her urine. But in the stud environment, stallions are trained to mount mares on command with minimal interaction with the mare beforehand. Stallions do vary in their libido and mating quirks. Some will be known as “slow breeders” who will mount a mare only after extended periods of pre-copulatory behaviour. Others will mount within minutes of entering the barn. With hundreds of mares to cover on the big farms, extensive training is given to novice stallions to ensure the job is done as efficiently as possible. Immediately before mating, an attendant may hold up one of the mare’s front legs to further immobilise her while the stallion mounts. Once the stallion is firmly inside the mare, the foreleg will be released to allow her to take the weight of the stallion. The restraint of the mare ensures she is unable to reject the stallion’s advances. An attendant may guide the stallion’s penis into the mare and if the stallion has a particularly large penis, a breeding roll (a tube of foam) will be placed between the mare’s hindquarters and the stallion’s penis to reduce the depth of his thrusting. A few weeks later About a fortnight after covering, the mare will be undergo an ultrasound examination to determine whether she is pregnant, and to see if she is carrying twins. If the mare conceives twins she is highly likely to lose the pregnancy. Very few twin pregnancies go to term, and those that do often result in foals that are poor racing prospects. If twins are discovered, the veterinarian destroys one of them. This allows the surviving embryo to go to term, but unfortunately this also allows the genes for twinning through to the next generation. A mare’s pregnancy lasts around 11 months, and as she enters the final days she will be brought into the foaling paddocks or, if the weather is inclement, specially designed foaling stables. There she will be observed for 24 hours a day until she foals. Foaling assistants will intervene if the mare experiences difficulties during foaling and can assist by repositioning the foal’s legs or pulling the foal out manually. Foaling staff also provide immediate postnatal care to the foal. This contrasts with what happens the wild, where mares separate themselves from their herd to foal alone. Should a mare be unable to care for her foal, nurse mares may be used to rear her foal. Nurse mares can be hired from specialist providers or are maintained at the stud. The nurse mare’s own foal will be removed and replaced with the Thoroughbred foal which she will raise as her own. There is no official data on the number or fate of nurse mare foals, or the average age at which they are removed. Orphan foals can be difficult and costly to hand-rear and may be prone to health and behavioural issues later in life. Health issues can arise if the orphan foal has difficulty adapting to the abrupt change in diet (from mare milk to milk replacer). Behavioural issues can arise due to the lack of socialisation with other horses during the hand-rearing period. The use of hormones to induce lactation in nurse mares without the need for them to be pregnant or give birth to a foal shows promise as a means of reducing the production of surplus foals from nurse mares. About a month after giving birth, the mare will be mated again to produce next year’s foal. Who gets to race? Not every foal makes it to the racetrack. Read more: Dressing up for Melbourne Cup Day, from a racehorse point of view Some will experience career-ending injuries as youngsters (before they enter training), and many more will be deemed too slow or suffer injuries during pre-race training as young adult horses. Some of the female horses who don’t race will end up as broodmares themselves, depending on the quality of their pedigree. But the 65% of Thoroughbred foals that do make it to the track are the end result of a complex and highly choreographed breeding system designed with one goal in mind: to maximise the chance of producing a winner. 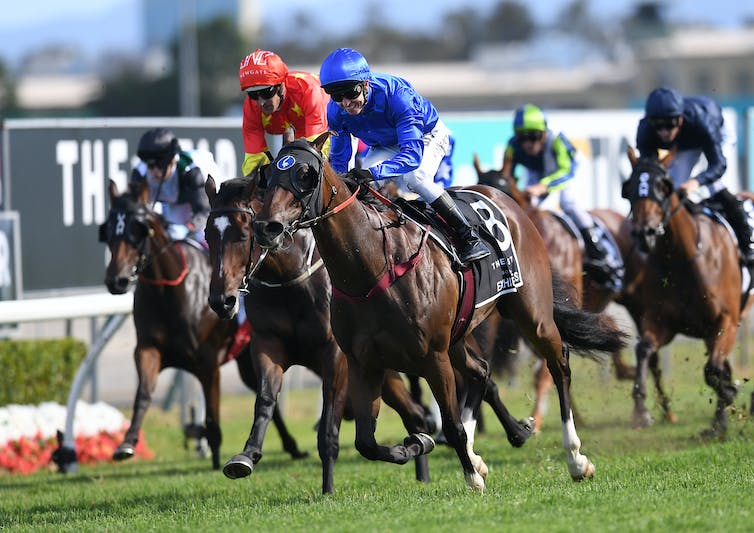 Most foals go on to race such as Exhilarates, ridden by Jockey Kerrin McEvoy (centre), who won race 8 of the Magic Millions 2YO Classic, on the Gold Coast this January. AAP Image/Dan Peled