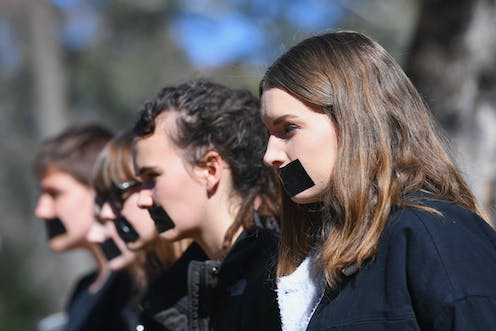 If anyone doubts the need for a charter of rights in Australia, the Banerji decision of the High Court handed down last week demonstrates why legislative protection for our common law freedoms has become a matter of national urgency.

We have it from the most authoritative source. The High Court has confirmed unanimously that Australians do not have a personal right to freedom of speech.

Most Australians might be surprised to learn this, but this is one of the consequences of Australia being the only Western democracy without some form of charter of rights legislated by parliament or entrenched in the constitution.

A ‘freezing’ effect on free speech

The High Court is technically right. The constitution does not explicitly protect the right to freedom of speech. In its ruling, the court upheld the government’s right to sack Michaela Banerji, a public servant, for her critical tweets about the indefinite detention of refugees offshore, among other concerns.

It was a highly technical and narrow interpretation of the law. It failed to acknowledge the common law right to freedom of expression, which is as ancient as the English Bill of Rights 1689. It also failed to recognise Australia’s international treaty obligations.

The High Court acknowledged that, had this case arisen in Canada, the Canadian Charter of Rights and Freedoms might have provided some protection.

With respect to free speech, the Canadian Supreme Court has adopted the test of “minimum impairment” guaranteed by its charter. The court has said that a blanket ban on critical comments by public servants is not “justified in a free and democratic society”. Any restriction on the freedom of expression of a public servant must not go

beyond what [was] necessary to achieve the objective of an impartial and loyal civil service.

A similar charter protection in Australian law may not have saved Banerji on the facts of her case, as it is arguably necessary to protect the integrity of the public service. But the impact of the High Court’s decision is likely to have a chilling, if not freezing, effect on the liberty of public servants to speak up fearlessly when governments abuse their powers or trample on fundamental freedoms.

This is especially worrying as public officials are often in the best position to know.

Timing, of course, is everything. The Banerji decision comes in the middle of a national debate about the need for religious freedom protections in the Israel Folau case, and the threats to press freedom posed by recent federal police raids on a News Corp journalist and the ABC.

It is more than ironic the government should also be prosecuting Bernard Collaery, a former attorney-general for the ACT, for espionage. His alleged offence was to provide legal advice to Witness K, a whistleblower who recently agreed to plead guilty to releasing information about Australia’s spying activities in Timor-Leste.

Less sensational, but a serious restriction on our common law freedoms, are the laws introduced since 2001 to counter the threat of terrorism. These laws have been coined “hyper-legislation”, as they are more extensive and intrusive than those adopted by other nations.

Read more: How a charter of rights could protect Australians' fundamental freedoms

The UK’s Human Rights Act has provided guidance to courts when rejecting laws passed in the name of national security that breach fundamental freedoms.

In the Belmarsh case in 2004, for example, the House of Lords condemned the detention of suspected terrorists who had not had the benefit of a criminal trial. The court found their detention was not rationally related to the perceived threat to national security and was illegal.

Since 2001, respective Australian governments, supported by opposition parties, have granted unprecedented powers to security and intelligence agencies and discretionary powers to ministers. There have not been compelling national security reasons for granting these powers, nor are these powers reviewable, for practical purposes, by our courts.

Among the many examples of legislative overreach in Australia since then are the Data Retention Act, Foreign Fighters Act, Espionage and Foreign Interference Act, de-encryption provisions, laws expanding detention for questioning, and secrecy laws applicable to offshore detention and security operations.

There are also countless apparently minor intrusions on our rights. In 2014, the Australian Law Reform Commission found at least 121 laws infringe our democratic freedoms, from mandatory sentencing laws to restrictions on environmental protests.

Sadly, traditional common law rights that might protect us from such legislative excesses are all too readily ignored by the courts.

Would a charter lead to greater judicial power?

How would a charter of rights ensure that government intrusions on our liberties are reasonable and proportionate to achieve a legitimate end - the test adopted by the High Court to assess the validity of federal laws?

A charter is not a sole solution. Many nations that abuse human rights have one. But under Australian law, a charter would give greater power to the courts to ensure that common law freedoms were respected.

A judge could, for example, apply charter law to prohibit indefinite detention without trial of stateless persons, the mentally ill and asylum seekers and refugees; ensure that juveniles are not held in adult facilities; require governments to provide adequate housing for all; ensure access to medical care and social justice; protect against disproportionate counter-terrorism and surveillance laws; and protect the culture and rights of Indigenous peoples.

Would this mean the expansion of judicial power at the cost of parliamentary sovereignty? Would it be a carbon copy of the US Bill of Rights?

Not if we adopt the so-called “dialogue model” of the Victorian Charter of Human Rights and Responsibilities. Under this model, a Victorian court cannot invalidate a law; it can only declare that a law does not comply with charter rights. It is then up to parliament to amend the offending law as it sees fit.

It would be a misunderstanding of the role of a rights charter to think only of judicial power. The real significance of a charter lies in the benchmarks it creates to influence the decisions of public officials and the standards demanded by the community. A charter is a check on government power that is vital to contemporary democracy.

We now have a serious deficit in legal protection for human rights in Australia, rights that have been in regression for 20 years. We now need to consider a legislated charter setting out the rights we care about.

Gillian Triggs will take part in a debate sponsored by La Trobe University on whether Australia needs a charter of human rights on Tuesday, Aug. 13, at the National Gallery of Victoria.