A small plane looped through the tranquil and cloudless Sydney sky today, spewing engine-heated liquid paraffin from its exhaust, creating puffy tracers. As people all over the city watched from rooftop bars, beach towels or their office windows, the plane scrawled the words “save unborn”, “choose life” and a crucifix across the sky.

The message, along with another on Sunday that said “choose life”, was commissioned by pro-life advocates amid legislation being debated to remove abortion from the New South Wales criminal code.

This was not the first time conservative political messages have been scrawled across the sky in the city. Many Sydneysiders will recall a similar incident in 2017, when opponents of the marriage equality bill scrawled “Vote No” in the air using crowd-sourced money from a GoFundMe campaign. 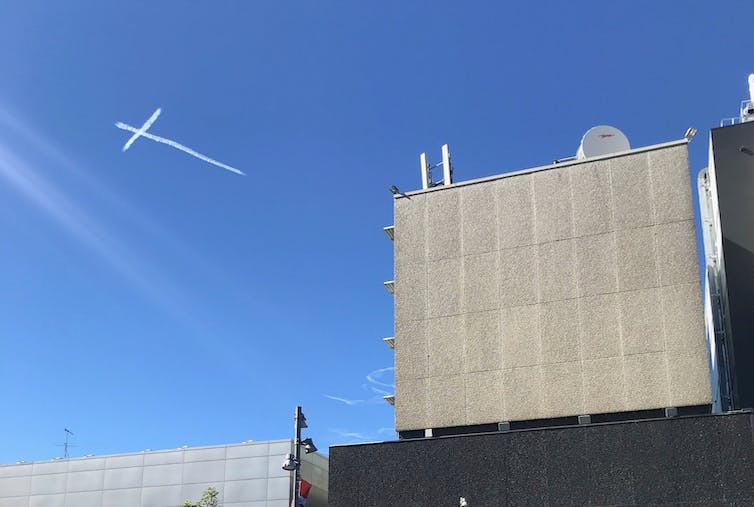 A cross was marked in the cloudless Sydney sky today as abortion legislation heats up in NSW. Author provided (No reuse)

Marriage equality supporters then raised their own funds for a counter-message, but the only skywriting pilot in Sydney refused to draw it. Campaigners instead used the money to hire a helicopter to tow a 10-metre rainbow flag across the horizon at Bondi Beach.

Once the domain of gauche advertising and endearing marriage proposals, it seems our urban skies are increasingly becoming a partisan battleground.

So what are the laws surrounding the use of the sky for political purposes?

Battles over free speech in the sky predate both social media and drone technology. 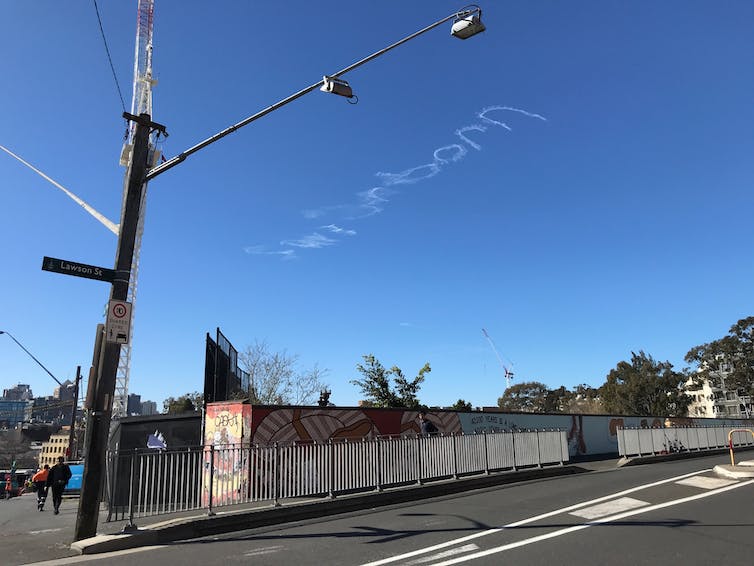 The, presumably incomplete, words of ‘Save unborn’ was written in Sydney today, alongside a cross and ‘Choose life’. Author provided (No reuse)

Almost 20 years ago in Southern California, the city of Huntington Beach attempted to pass legislation to ban aircraft towing graphic images on banners of aborted babies over its beaches. The city eventually dropped the efforts for fear of lawsuits.

In Australia, most forms of public messaging, such as TV, radio, and billboard advertising are heavily regulated – messages must be vetted and approved by the Australian Communications and Media Authority.

Yet after the “vote no” skywriting appeared in Sydney, authorities came to the conclusion it was impractical to monitor political skywriting, putting it in the same category as graffiti.

Due to the nature of skywriting, compliance with the authorisation framework would be impractical […] As such, section 321D of the Electoral Act does not apply in relation to electoral matter if the matter forms part of a communication that is graffiti or skywriting.

The difference, of course, is that graffiti is illegal. No one has ever been prosecuted for skywriting offensive or political speech, though the United States Navy was forced to issue a public apology in 2017 after one of their pilots drew a giant penis in the sky over Washington state during a training exercise.

In short, you are as free to write anything in the sky as you are to post it on the internet – provided you have a plane, or a pilot willing to relay your message.

Skywriting companies are seeing a surge in business for two reasons. First, in the age of Instagram, physically ephemeral statements can endure in the virtual realm. 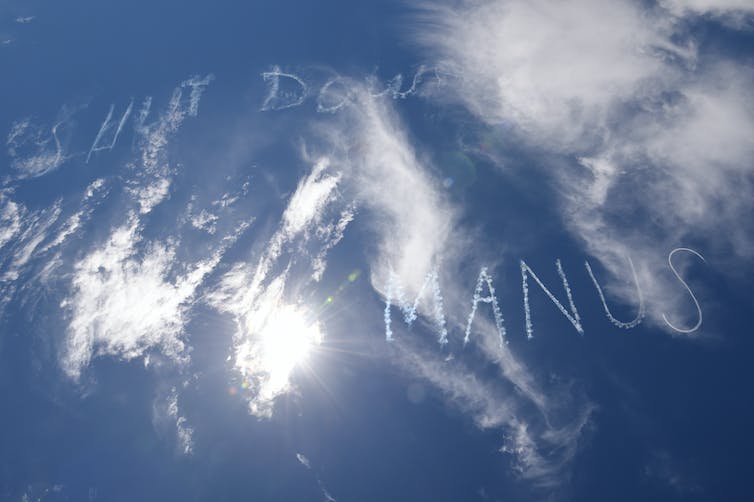 In 2015, ‘Shut down Manus’ was written in the sky over the CBD in Sydney. Dean Lewins

This was a lesson learned early on by graffiti writers. Even if a piece is “buffed” by authorities, its presence on the internet will remain, making the effort worth the risk for writers hoping to be noticed.

In the context of skywriting, which can cost thousands of dollars, virtual legacy justifies the expense.

The second reason for the interest in skywriting is that there is very little regulation over what happens in what University of NSW researcher Adam Fish and I have called our “atmospheric commons”. This refers to the space above our cities occupied by flights, kites, balloons, skydivers, skywriters and buzzing drones. 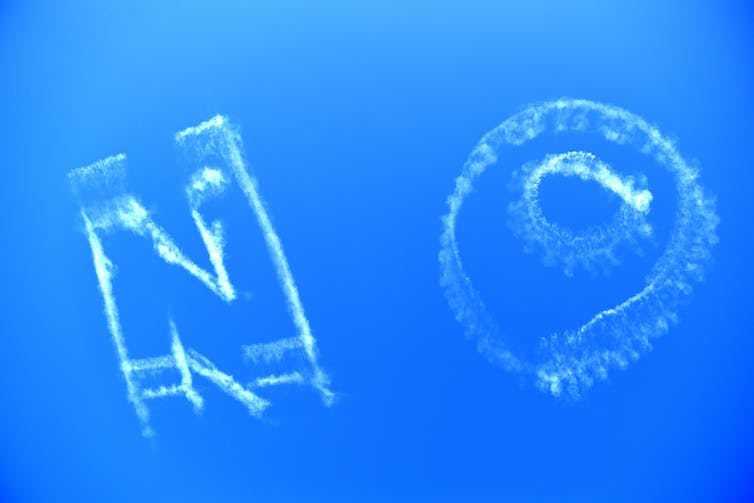 The word ‘NO’ (or was it ‘on’?) was written over Melbourne during the marriage equality debate. Joe Castro/AAP

Legislation around such atmospheric interventions is unclear and hard to enforce, as we saw last year when tens of thousands of passengers at Gatwick Airport in London were grounded by a couple of rogue drones.

The combination of new technologies and increasingly militant political activities may lead to a more restricted and regulated urban atmosphere above our heads in the future, what geographer Jeremy Crampton has described as an “enclosure” of vertical urban life.

In research from last year, physical geographer Karen Anderson and I suggest the catalyst for increasing regulation will likely be commercial, rather than activist, drone use. The reason for this is simple – companies like Amazon who want to use airspace for commercial drone business have far more power to lobby government.

What’s more, new forms of “skytyping” are emerging that are computer controlled, punched out by multiple aircraft like old dot matrix printers.

The messages are written at more than 3000 metres, triple the height of traditional skywriting. Letters can be created up to 300 metres tall and over eight kilometres long that endure for hours.

Read more: Not all graffiti is vandalism – let's rethink the public space debate

Once drones are developed that can carry 30 gallons of paraffin oil, perhaps every still blue day will descend into a computer controlled shouting match in the sky.

Whether we view this as a democratisation of freedom of expression or a gateway into uncontrollable celestial vandalism remains a matter of opinion. That is, until legislation catches up with an age where the ephemeral never really vanishes.