Last week, the Australasian Council of Women and Policing held its 2019 conference, with a focus on how law enforcement responds to women in the communities they serve and how police services can expand opportunities for women in leadership positions.

Although opportunities for women in policing have expanded over time, their overall numbers remain relatively low. Nationwide, about a third of all police personnel were women in 2017-18, but barriers remain to states achieving their goals of reaching 50-50 gender parity on police forces. Women are vastly underrepresented in senior roles, as well.

The changing role of women in policing

Women began to play a role in policing in the United Kingdom in the early 1900s, though this was initially limited to focusing on women and children impacted by war. By 1915, there were Women Police Service volunteer constables and officers patrolling streets across the country, though they were prevented from becoming a permanent part of the police force. 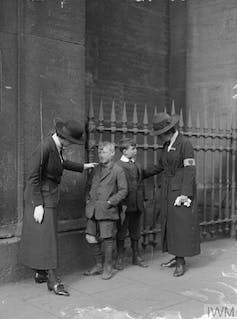 A female police patrol in London in 1918. UK Parliament

In the United States, Lola Baldwin became the country’s first sworn female police officer in the city of Portland, Oregon, in 1908. Baldwin focused on crime prevention in areas where women could be subject to predatory behaviours by men, such as dance halls and saloons.

As societal attitudes changed over time, the opportunities and roles for women in policing expanded. For example, in 1975, the Queensland Police Force established a specialised rape squad to handle crimes involving sexual assaults against women, creating an all-female team of investigators.

Women are still breaking into new areas of policing today. Queensland finally got its first female motorcycle officers in 2017, for instance, when two women passed the arduous three-week qualifying course. 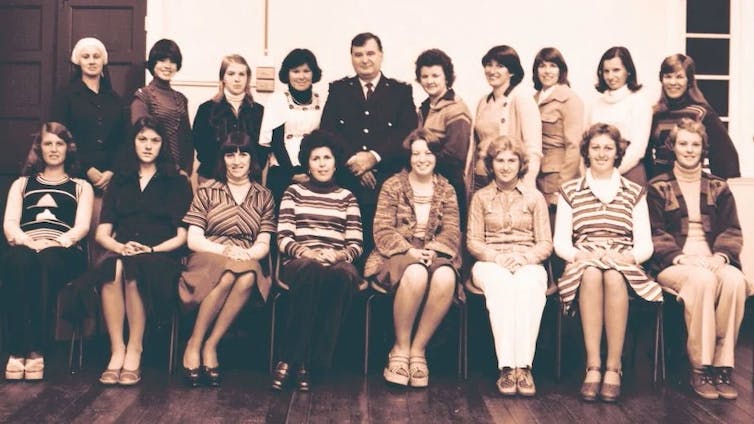 Participation of women in policing

In the United States, women comprised just 12% of sworn police officers (police officers with general arrest powers) in 2014 – an increase of just four percentage points from 1987. It is worth noting, however, that women were better represented on police forces in bigger population centres.

Gender equity is slightly better in the United Kingdom, where women accounted for 30% of police officers in 2019, up from 26% in 2010.

And in Australia, 33.6% of sworn and unsworn police personnel were women in 2017-18, up marginally from 32.2% in 2012-13, according to the Report on Government Services 2019. While most states have increased the number of women in their ranks in recent years, New South Wales and the Northern Territory have been trending in the opposite direction over the past 12 months. 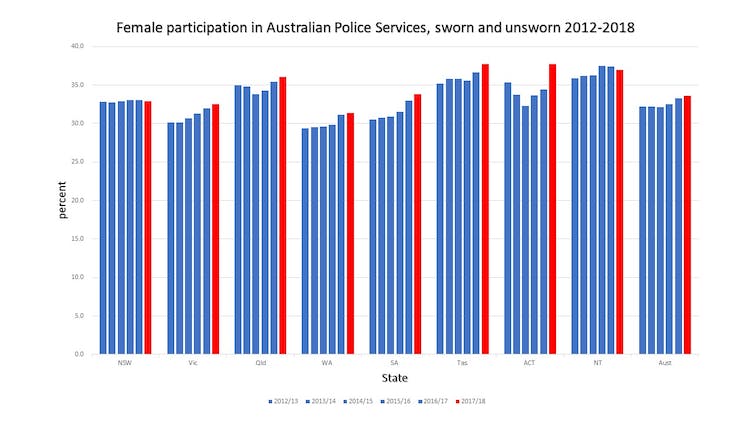 Australian women in policing 2012-18, including sworn and unsworn personnel. Report on Government Services 2019

Many police services across the country have now enacted strategies to achieve 50-50 gender equity for police staff. And several services, including the Australian Federal Police, have initiated independent reviews of their organisational culture and the prevalence of sex discrimination.

The United Kingdom appointed its first female chief constable (Pauline Clare) in 1995. In 2017, Cressida Dick was then appointed the first female head of the Metropolitan Police – the UK’s largest police service.

In 2001, Christine Nixon was appointed Victoria’s chief commissioner, the first woman to be named head of an Australian police force. And the appointment of Katarina Carroll as the Queensland police commissioner this July marked the final breaking of the glass ceiling for that police service.

Read more: Why is sexual harassment in the AFP systemic? And can the culture be changed?

However, despite these high-level appointments, problems still exist in terms of the representation of women in senior ranks. A 2018 analysis of Queensland police data showed that women were proportionally underrepresented at every rank above inspector in that state. When questioned about this imbalance of female leadership, Queensland Police Commissioner Ian Stewart said:

Our promotions are based on people who can show merit. We will again not be changing our systems to promote people who don’t have the merit to do the job.

A 2019 review of the NSW police promotion system found that women were also underrepresented in leadership roles in that state, but it did not find any overt discrimination.

Despite having gender-equity targets in place, many states struggle with the recruitment of women for police forces. Although the Queensland Police Force did reach 50-50 parity for its recruitment program in 2016-17, Stewart said it’s getting more difficult to attract female applicants.

If we don’t have enough we won’t change the standard, and we’ll have more male applicants than women in a recruit program. I think that will happen at times.

In essence, there are two main barriers to increasing the numbers of women in policing: elements of sexism and discrimination that result from the male-dominated culture in police forces and the nature of the job itself.

A number of police services, including NSW, South Australia, Victoria and the Australian Federal Police, have conducted inquiries into the culture of their forces and made commitments to stamp out discrimination based on gender.

What these changes cannot do, however, is make some aspects of the job more attractive to women. Operational policing involves shift work, long hours, exposure to physical harm and mental trauma. As Stewart noted,

Twenty-four-hour shifts and 365-days-a-year work all take a toll on people, and particularly for women who are the primary raiser[s] of families

But it remains to be seen if these steps will make a difference. While the number of women in policing is on the rise, only time will tell if the goal of reaching 50-50 gender parity will someday become reality.