Australia’s attempts to secure the release of an Australian national and two with joint UK-Australian citizenship from an Iranian prison have become vastly more complicated following the brazen attacks on Saudi oil facilities over the weekend.

Room for quiet diplomacy has been narrowed while the world comes to terms with a strike at the very heart of global energy security.

At this stage, it is not clear to what extent facilities at Saudi Arabia’s main refinery have been crippled, but initial reports indicate it could be weeks and possibly months before it is brought back into full production.

Read more: As Australia looks to join a coalition in Iran, the risks are many

Saudi Arabia’s Abqaiq refinery processes about half the kingdom’s oil production. According to initial reports, the attack reduced throughput by 5 million barrels a day, or nearly 5% of global production.

Australia’s former foreign minister, Julie Bishop, has offered to intervene with the Iranian authorities in an attempt to secure the release of the Australian nationals being held in Tehran.

These include Mark Firkin and his UK-Australian girlfriend, Jolie King. The two were arrested earlier this year for the unauthorised flying of a drone near a military facility on the outskirts of Tehran. They have not been charged.

More serious at this stage, however, is the case of Melbourne University Middle East specialist and joint UK-Australia citizen Kylie Moore-Gilbert, who was detained in October 2018. She has been sentenced to 10 years in jail. 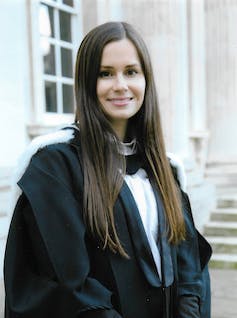 Iran has not publicly announced details of charges against her.

The cases of Moore-Gilbert, Firkin and King have, inevitably and unhelpfully, become enmeshed in wider geopolitical tensions in which Iran is fighting back against a US sanctions regime that seeks to cripple its economy.

Iran is being accused of “hostage diplomacy” by resorting to the incarceration of foreign nationals at a time when sanctions are rendering enormous damage to its oil-exporting economy.

This is the background to the diplomatic challenges facing the Australian government in its efforts to free its citizens. These are, by any standards, unpromising circumstances.

While Australian officials insist Canberra’s decision to commit to a US-led mission to protect ships travelling through the Strait of Hormuz is unconnected to the detention of its citizens, Tehran has a history of using individuals ruthlessly as bargaining chips in a wider geopolitical game.

Hostage taking, or “hostage diplomacy”, has a lengthy tail in the history of the Islamic Republic going back to the November 4, 1979, seizure of the American embassy in Tehran and a siege that ensued for 444 days. Fifty-two Americans were held hostage for more than a year.

More recently, Washington Post reporter Jason Rezaian was held in Iran for 544 days before being released with three other Iranian-Americans as part of a prisoner swap in 2016, just before economic sanctions on Iran were lifted under the terms of the nuclear deal.

In recent weeks, Iran has also detained a UK-flagged oil carrier in the Persian Gulf. The Stena Impero remains in Iranian custody, but members of its crew have been let go.

US blaming Iran for Saudi attack

All this was contributing to heightened tensions in the gulf before this weekend’s attacks at the very heart of Saudi Arabian oil infrastructure.

US Secretary of State Mike Pompeo wasted little time in blaming Iran for the attacks. Although Houthi rebels in Yemen claimed responsibility for the strikes using drones, Washington is investigating whether cruise missiles were the weapon of choice, fired from either Iraq or Iran itself. A Trump administration official told Reuters,

There’s no doubt that Iran is responsible for this. No matter how you slice it, there’s no escaping it. There’s no other candidate.

Saudi Arabia and its Yemeni government allies have been engaged in a vicious conflict with Houthi rebels since 2015. Thousands have been killed, and many more displaced, in what is regarded as the most serious humanitarian crisis in the world today.

Read more: Yemen: a calamity at the end of the Arabian peninsula

Iran is supporting the Houthis and is widely accused of fuelling the Yemen conflict to weaken Saudi Arabia.

In other words, the gulf and its environs are primed for worsening conflict unless the US and Iran can reach an accommodation that would enable an easing of sanctions.

President Donald Trump has been angling for a face-to-face meeting with Iranian President Hassan Rouhani at the upcoming United Nations General Assembly to address ways in which tensions could be eased.

Attacks on Saudi Arabian oil facilities – and, thus, the global economy – hardly provides a favourable environment for discussions that might, or might not, take place.

Iran has set as a precondition for talks a relaxation of sanctions. 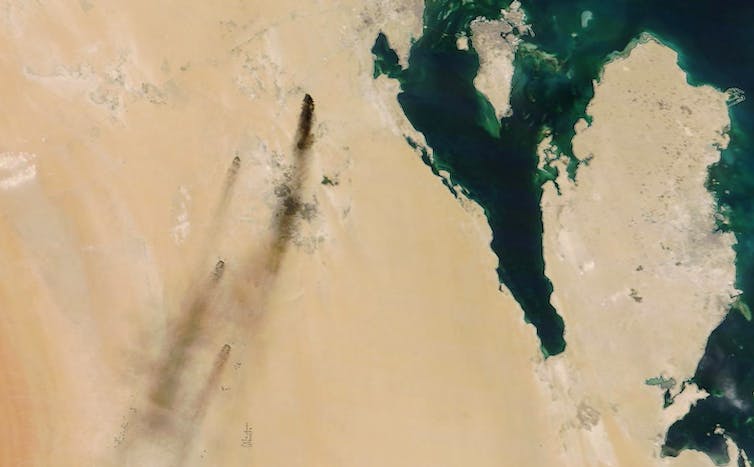 Satellite image of smoke from fires at two major oil installations in Saudi Arabia after the attack over the weekend. NASA Worldview Handout/EPA

Meanwhile, the Australian government finds itself in a situation where it has limited leverage. Trade between Australia and Iran is negligible and holds little promise as long as sanctions remain in place. Canberra’s decision to join a US-led mission in the Middle East means that it is now identified with Washington’s “maximum pressure” approach.

Australia is one of three countries to have signed up to the US initiative. The others are Britain and Bahrain.

In all of this there is another complicating factor, and one that has been little-reported. Tehran was displeased when Australia arrested an Iranian citizen at the request of the US for breaching sanctions.

Iran made repeated representations to secure the release of Negar Ghodskani after her arrest in 2017. She has pleaded guilty to conspiring to facilitate the illegal export of technology from the US and faces a hefty fine and jail time.

This is a tangled web, and hardly likely to become less so.