Martin Lee Chu-ming is affectionately known as the “grandfather of Hong Kong democracy”.

A practising barrister, former parliamentarian and founding chairperson of the United Democrats, Hong Kong’s first political party, Lee played a leading role in the group that drafted the Basic Law that specified the fundamental constitutional rights and freedoms of Hong Kong citizens when the former British territory was handed back to China in 1997.

Now in his ninth decade, Lee still looks boyishly young and he is still heavily invested in Hong Kong’s pro-democracy movement. As the unrest in the city enters its fifth month, Lee says the “fortunes of democracy are everywhere now at rock bottom.”

“That’s why what’s happening here is so important,” he tells me at a cafe in Hong Kong’s Wan Chai district last weekend. “We’re proving that Beijing’s power is not invincible or inevitable. We’re demonstrating that failure is not falling down but refusing to stand up.”

Lee says he’s not surprised by the rising levels of counter violence from the protesters, who are known as martyrs, or their active cooperation with the “peaceful, reasonable and non-violent” (he uses the Cantonese words wo lei fei) citizens who ferry helmets, goggles, bricks, sticks and railings to the front line.

He sees no end to the police’s use of rubber bullets, tear gas, sponge grenades and blasts of cobalt-blue water mixed with pepper spray. The protesters’ street fires, rock throwing and petrol bombs will continue, too. Lee fears the violence on both sides will soon spiral out of control.

“Each evening I watch the live television coverage and don’t go to bed until I see the kids have made it home safely.” 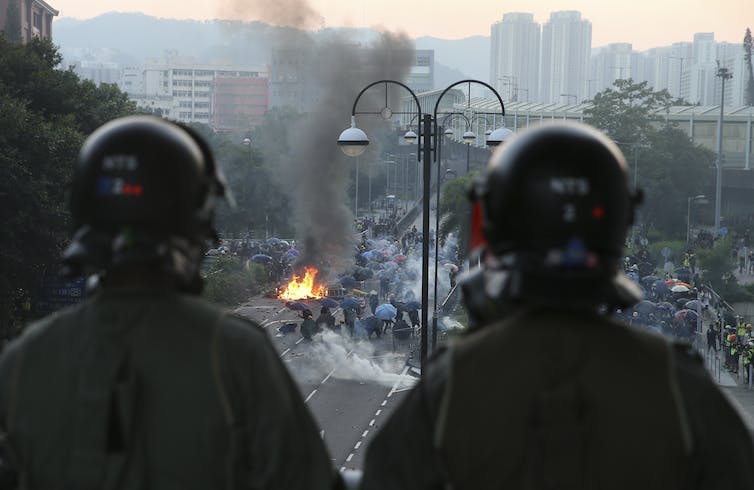 The 70th anniversary of the founding of the People’s Republic of China triggered some of the most violent clashes between protesters and police in Hong Kong. Jerome Favre/EPA

Lee dislikes the way Beijing and local officials are whipping up talk of “riots”, “chaos” and “terrorism” and mischievously conflating the legally significant difference between acts of “violence against persons” and “damage to property”.

And he understands why surveys show that a majority of Hong Kong citizens, among them growing numbers of schoolchildren, support the uprising through thick and thin.

“We’ve won the hearts of people, even though there’s violence. Citizens say that if we go back to the old peaceful ways, they’ll simply ignore us.

Public anger has been deepened by Beijing’s slow-motion strategy of degrading Hong Kong institutions by pressuring them to clamp down on the uprising. Many of these institutions once enjoyed strong public support - bodies such as MTR public transport, Cathay Pacific, the police and the District Court.

"China is acting as if the 1997 Joint Declaration no longer applies,” he says. He feels certain Beijing wants further crackdowns, for instance, banning people from wearing masks at public gatherings. Their ultimate aim is to weaken and destroy the spirit and substance of rule-of-law democracy.

“The kids know it. We all know it. We fear Hong Kong will become just another Chinese city.”

The primary cause of the unfinished uprising is the “long litany of broken promises of democracy”, Lee continues.

The British were never angels with luminous wings, he explains.

“We now know that in the early 1970s, as a concession to China, they removed Hong Kong from the United Nations list of colonies entitled to self-government. During the early handover negotiations, their diplomats often said we were only interested in money, not democracy.

"When it came to introducing elections, they dragged their feet. There should have been free and fair elections right from the beginning of the handover negotiations. The British delayed and delayed, until it was too late.”

Lee is just as tough on Beijing. He played a leading role in the opening negotiations about the future of Hong Kong with top Communist Party officials who gave reassurances, he says, that little would change.

“They urged us to be confident about Hong Kong’s autonomy. Only the flag and the governor would change, they said. I compared our situation to a see-saw game: balancing big China and little Hong Kong required granting us democracy and limited interference by Beijing. They understood.”

Read more: With no end in sight and the world losing interest, the Hong Kong protesters need a new script

But a flip-flop happened. Beijing began gradually to clamp down on Hong Kong’s vibrant civil society. Lee says the half-million-strong demonstration that forced the scrapping of a draft anti-subversion law in 2003 was the tipping point.

“[Chinese] Premier Wen Jiabao happened to be here. On the day of the massive rally, instead of returning to Beijing, he watched the day’s events live on television, from just across the border in Shenzhen. He was told by his officials that there were at most 50,000 demonstrators. He saw otherwise.

"From that moment, things changed. Beijing went from hands-off to hands-on Hong Kong.” 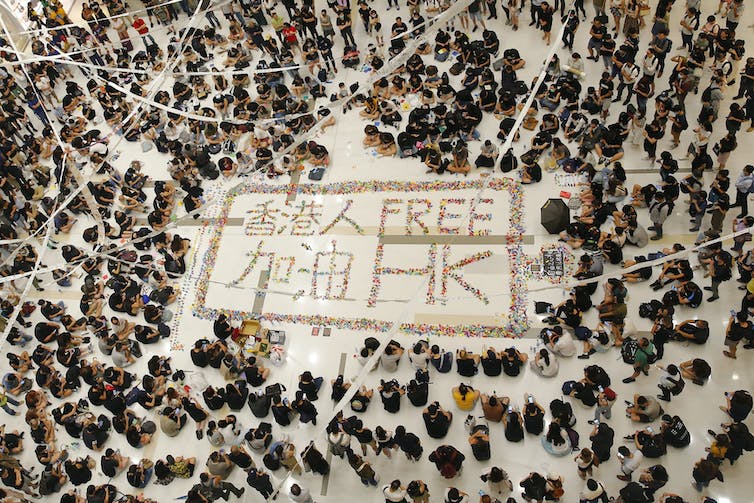 A rally this week against the use of unchecked force by police in Hong Kong. Fazry Ismail/EPA

The legacy of broken past promises is taking its toll, the veteran democrat says. Things are now coming to a head. Chinese President Xi Jinping “will soon make up his mind about what is to be done”, Lee says.

“If Xi orders a full crackdown there’s a good chance things will calm down. But that will kill Hong Kong.”

Lee also doubts the viability of the Communist Party’s State Council plan to integrate the southern mainland city of Shenzhen with neighbouring Hong Kong and Macau.

Read more: Hong Kong is one of the most unequal cities in the world. So why aren't the protesters angry at the rich and powerful?

But what’s important is that a great deal of foreign direct investment is still sluiced through Hong Kong and the city’s currency is pegged to the US dollar, with backing from the Hong Kong Monetary Authority, the local currency regulatory body.

A full Beijing takeover of Hong Kong faces other obstacles. Internet cables in the city are locally owned, and new super-fast data circuits linking Hong Kong to the wider Asia-Pacific region are planned.

Lee agrees that Hong Kong is up against an emergent Chinese global empire. Another Cold War with the United States seems “inevitable”, he says, which is why there’s rising global awareness of what’s at stake in Hong Kong. 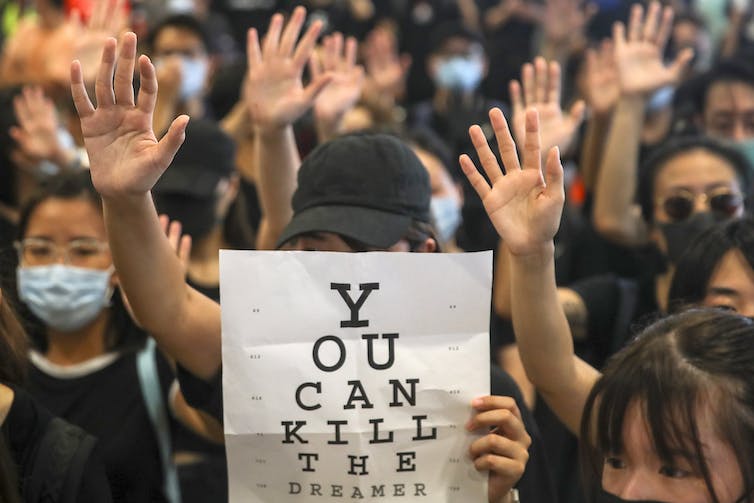 The protests have been fuelled by the anger of citizens against a government they see as captive to Beijing. Fazry Ismail/EPA

He’ll soon visit the US in support of Congress’s Hong Kong Human Rights and Democracy Act, which he believes has a fighting chance of becoming law.

Then there’s the unfinished business of Hong Kong elections. District Council elections are scheduled for late November, and he says pro-democrats will for the first time contest every seat.

As for where the current protest movement is headed, Lee tells me “talk of revolution is just talk. It’s out of the question.” He pauses. “Things look impossible”, he says. “We need miracles.”

With street battles in Wan Chai again about to rage long into the night, I press him to be more exact. Can the birds of civil society, free elections and constitutional democracy now move mountains, a few stones at a time? What are their chances of success?