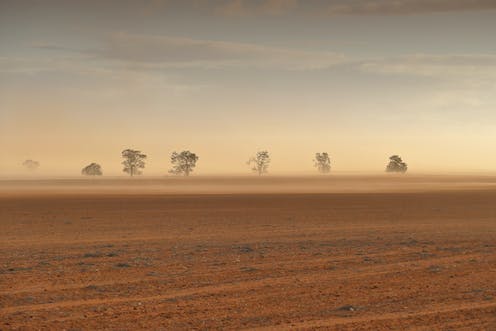 They say the measure – giving up to $13,000 to a couple and $7500 to individuals at a cost of $12.8 million this financial year - had been in cabinet’s expenditure review committee process for some time.

But the National Farmers Federation says it wasn’t given any notice, which seems odd since drought minister David Littleproud is constantly referencing the NFF.

Regardless of the sequencing, Jones’ extraordinarily angry and emotional performance on Tuesday, haranguing Morrison on radio, breaking down on TV, and warning of dire political consequences if the government didn’t do something, certainly concentrated the prime minister’s mind.

As one official puts it, Morrison is “attuned to the zeitgeist”. Described more prosaically, the PM is highly sensitive to public opinion, and he judges that in metropolitan areas as well as the regions, people want more action - and then more still - to help those brought to their knees.

As for Jones, whatever impact his outbursts had on the government, the fact the announcement followed so soon will be used to burnish his much honed image of having political influence.

Read more: View from The Hill: Alan Jones v Scott Morrison on the question of how you feed a cow

When he became PM, Morrison was immediately anxious to own the issue of the drought. He referred to it in his news conference the day he was elected leader, saying it was “the first thing I need to turn attention to”, and was quickly off to a drought-affected area.

Now he is feeling the full cost – political as well as financial – of that ownership, as he’s confronted with pressure on all sides.

NFF president Fiona Simson continues to say she doesn’t think the government has a drought policy.

The Coalition’s handling looks ad hoc and reactive. The responses of federal and state governments need to be better linked. For example, is there a case for federal help for moving breeding stock to agistment? Oh, the feds say, that’s in the state arena (rather than looking at augmenting state assistance). Drought policy is bedevilled by the old federal-state blame game, as shown by the wrangling over dam building.

Also, the government has no credible reason for keeping under wraps the report it commissioned from Stephen Day, who was its drought-coordinator, which would provide some useful overview.

Thursday’s announcement of the cash payment was messy: Morrison trumpeted it on radio at the same time as the Nationals unveiled it at a press conference.

(Morrison chose John Laws’ program, which he rarely goes on. Laws asked pointedly, “Why do you permit yourself to be harangued in the way that Alan Jones harangues you …[a lot of people] rather felt that it was a sign of weakness that you let Alan get away with what he got away with.”)

Read more: A national drought policy should be an easy, bipartisan fix. So why has it taken so long to enact a new one?

Some Nationals were unhappy at Morrison seemingly one-upping their leader Michael McCormack and his colleagues, especially as the PM went out of his way to tell listeners “that’s new news today on the John Laws programme”.

Nationals, under the pump in their seats, see it as symptomatic of a wider issue about Morrison’s approach. One senior National says: “Morrison is going to have to learn to build a deeper and more respectful relationship with the Nationals – find space for McCormack to be seen to be delivering for regional Australia.”

The Nationals’ problems go further. Outsiders observe the rivalry between the party’s deputy leader Bridget McKenzie and Littleproud, both of whom have stakes in drought policy. Littleproud was particularly upset at losing the agriculture portfolio to McKenzie after the election.

From the Coalition’s vantage point the drought debate – and the prime minister making himself so central in it - has raised unrealistic expectations of what government can do.

In prolonged drought, the harsh reality is some farmers will go under, just as in a recession, some city businesses will fail. There is only so much protection a government can or should provide. The difficulty for many farmers is deciding whether hanging on is worth the gamble, because there is no knowing how long it will be before the rains come.

On two fronts now Morrison, who likes to be in control, is at the mercy of events he can’t control. Apart from the drought, the International Monetary Fund’s downgrading this week of the growth outlook for the world and for Australia has reinforced the message that the government’s economic policy is on a knife edge.

Read more: The dirty secret at the heart of the projected budget surplus: much higher tax bills

The situation poses a judgement call for the government – inject some stimulus quickly or hope that it can get through on its present fiscal setting, keeping its projected surplus (its top priority) intact.

Three reductions in interest rates in quick time haven’t had much effect in boosting the economy (and there is speculation about another). On the evidence to date, neither have the income tax cuts achieved what was hoped. People are not spending enough; many businesses are uncertain.

So far, the government has held out in face of exhortations from Reserve Bank Governor Philip Lowe to help on the fiscal side. (Lowe’s style might be at the opposite end of the advocacy spectrum to that of Jones, but he can pack a punch.)

Morrison and Treasurer Josh Frydenberg (who is in the US for the IMF and other meetings) this week defended their position on the surplus as a giving a buttress against bad times.

“A surplus is not an end in itself”, Morrison told parliament - “a surplus … is a means to an end,” the end being that “Australians can have confidence that we can meet the uncertainties that are ahead.”

He describes Labor’s calls for government action as reflecting its “penchant … for panic and crisis.”

As it stands by its unwillingness to inject immediate stimulus, the government is harking back to the Labor’s action in the global financial crisis and what it condemns as overreach. Probably it was, but going hard and going early also made sure Australia had a gold-plated insurance policy.

The period ahead will tell whether the government’s present refusal to stimulate the economy does indeed show the “cool and clear heads” that Morrison boasts. Or whether it will turn out to be an unfortunate manifestation of pig headedness, with policy having to be modified subsequently. If the latter, let’s hope it won’t be a case of too little too late.