Have you ever sat down to complete your morning crossword or Sudoku and wondered about what’s happening in your brain? Somewhere in the activity of the billions of neurons in your brain lies the code that lets you remember a key word, or apply the logic required to complete the puzzle.

Given the brain’s intricacy, you might assume that these patterns are incredibly complex and unique to each task. But recent research suggests things are actually more straightforward than that.

It turns out that many structures in your brain work together in precise ways to coordinate their activity, shaping their actions to the requirements of whatever it is that you’re trying to achieve.

We call these coordinated patterns the “low-dimensional manifold”, which you can think of as analogous to the major roadways that you use to commute to and from work. The majority of the traffic flows along these major highways, which represent an efficient and effective way to get from A to B.

We have found evidence that most brain activity follows these types of patterns. In very simple terms, this saves your brain from needing to work everything out from scratch when performing a task. If someone throws you a ball, for instance, the low-dimensional manifold allows your brain to swiftly coordinate the muscle movements needed to catch the ball, rather than your brain needing to learn how to catch a ball afresh each time.

Read more: How the brain prepares for movement and actions

In a study published today in the journal Neuron, my colleagues and I investigated these patterns further. Specifically, we wanted to find out whether they play a role in shaping brain activity during really challenging cognitive tasks that require lots of concentration.

We scanned people’s brains with high-resolution functional magnetic resonance imaging (fMRI) while they performed a Latin squares task, which is similar to a Sudoku puzzle but uses shapes instead of numbers. Anyone who has played Sudoku before their morning coffee knows how much focus and concentration is required to solve it.

The idea behind the Latin squares task is to identify the missing shape in a particular location in a grid, given that each shape can only show up once in each row and column. We created three different levels of difficulty, defined by how many different rows and columns needed to be inspected to arrive at the correct answer.

Our prediction was that performing the more difficult versions of the task would lead to a reconfiguration of the low-dimensional manifold. To return to the highway analogy, a tricky task might pull some brain activity off the highway and onto the back streets to help get around the congestion.

Our results confirmed our predictions. More difficult trials showed different patterns of brain activation to easy ones, as if the brain’s traffic was being rerouted along different roads. The trickier the task, the more the patterns changed.

What’s more, we also found a link between these changed brain activation patterns and the increased likelihood of making a mistake on the harder version of the Latin Squares test.

In a way, attempting a difficult task is like trying out a new rat run on your morning commute – you might succeed, but in your haste and stress you might also be more likely to take a wrong turn.

Overall, these results suggests that our brain activity perhaps isn’t as complicated as we once thought. Most of the time, our brain is directing traffic along pretty well-established routes, and even when it needs to get creative it is still trying to send the traffic to the same ultimate destination.

This leaves us with an important question: how does the brain achieve this level of coordination?

One possibility is that this function is fulfilled by the thalamus, a structure that lies deep in the brain but is connected to almost the entire rest of the brain.

Importantly, the circuitry of the thalamus is such that it can act as a filter for ongoing activity in the cerebral cortex, the brain’s main information processing centre, and therefore could exert the kind of influence we were looking for. 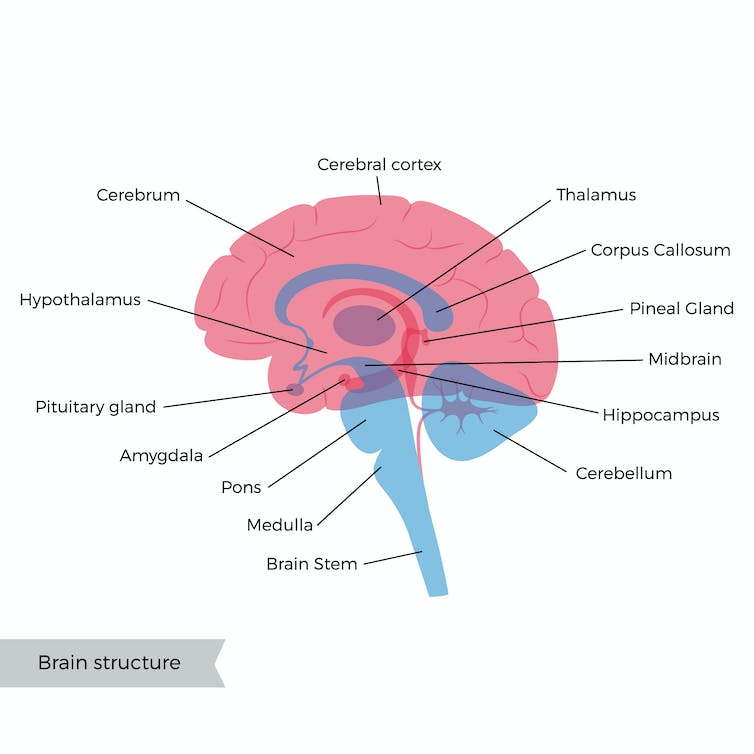 Positions of the thalamus and the cerebral cortex within the brain. Pikovit/Shutterstock

Patterns of activity in the thalamus are hard to decipher in traditional neuroimaging experiments. But fortunately, the high-resolution MRI scanner used in our study collected by my colleagues Luca Cocchi and Luke Hearne allowed us to observe them in detail.

Read more: Neuroscience in pictures: the best images of the year

So next time you sit down to play Sudoku, spare a thought for your thalamus, and the low-dimensional manifold that it helps to create. Together, they’re shaping the brain activity that will ultimately help you solve the puzzle.