Scientific research doesn’t usually mean being strapped in a harness by the open paratroop doors of a Vietnam-war-era Hercules plane. But that’s the situation I found myself in several years ago, the result of which has just been published in the journal Marine Biodiversity.

As part of the Ocean Cleanup’s Aerial Expedition, I was coordinating a visual survey team assessing the largest accumulation of ocean plastic in the world: the Great Pacific Garbage Patch.

When the aircraft’s doors opened in front of me over the Pacific Ocean for the first time, my heart jumped into my throat. Not because I was looking 400m straight down to the wild sea below as it passed at 260km per hour, but because of what I saw.

This was one of the most remote regions of the Pacific Ocean, and the amount of floating plastic nets, ropes, containers and who-knows-what below was mind-boggling.

However, it wasn’t just debris down there. For the first time, we found proof of whales and dolphins in the Great Pacific Garbage Patch, which means it’s highly likely they are eating or getting tangled in the huge amount of plastic in the area. 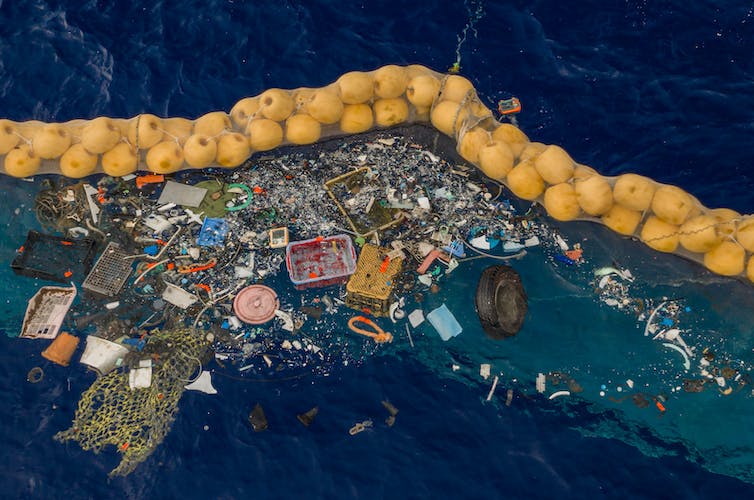 Our overall project was overseen and led by The Ocean Cleanup’s founder Boyan Slat and then-chief scientist Julia Reisser. We conducted two visual survey flights, each taking an entire day to travel from San Francisco’s Moffett Airfield, survey for around two hours, and travel home. Along with our visual observations, the aircraft was fitted with a range of sensors, including a short-wave infrared imager, a Lidar system (which uses the pulse from lasers to map objects on land or at sea), and a high-resolution camera. 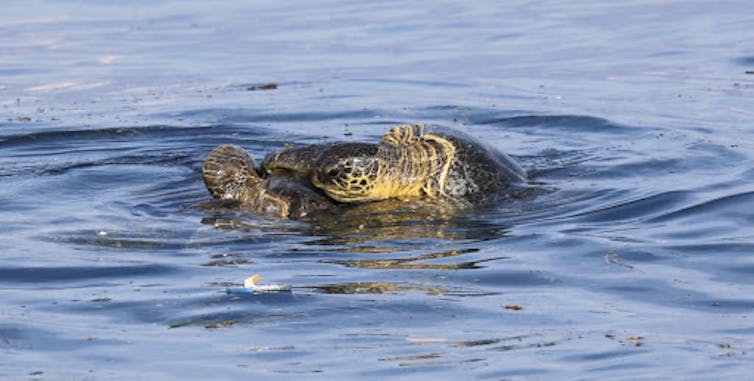 Plastics in the ocean are a growing problem for marine life. Many species can mistake plastics for food, consume them accidentally along with their prey or simply eat fish that have themselves eaten plastic.

Both beaked and sperm whales have been recently found with heavy plastic loads in their stomachs. In the Philippines, a dying beaked whale was found with 40kg of plastic in its stomach, and in Indonesia, a dead sperm whale washed ashore with 115 drinking cups, 25 plastic bags, plastic bottles, two flip-flops, and more than 1,000 pieces of string in its stomach.

The danger of ghost nets

The most common debris we were able to identify by eye was discarded or lost fishing nets, often called “ghost nets”. Ghost nets can drift in the ocean for years, trapping animals and causing injuries, starvation and death. 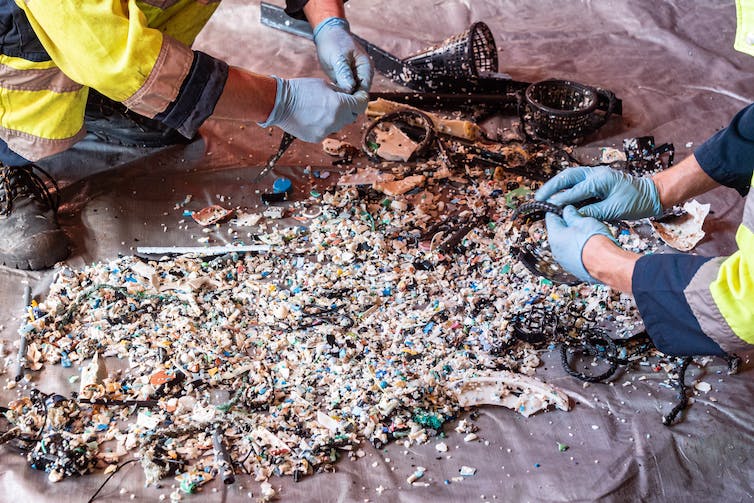 Whales and dolphins are often found snared in debris. Earlier this year, a young sperm whale almost died after spending three years tangled in a rope from a fishing net.

During our observation we saw young calves with their mothers. Calves are especially vulnerable to becoming trapped. With the wide range of ocean plastics in the garbage patch, it is highly likely animals in the area ingest and become tangled in it.

It’s believed the amount of plastics in the ocean could triple over the next decade. It is clear the problem of plastic pollution has no political or geographic boundaries.

Read more: There are some single-use plastics we truly need. The rest we can live without

While plastics enter the sea from populated areas, global currents transport them across oceans. Plastics can kill animals, promote disease, and harm the environment, our food sources and people. 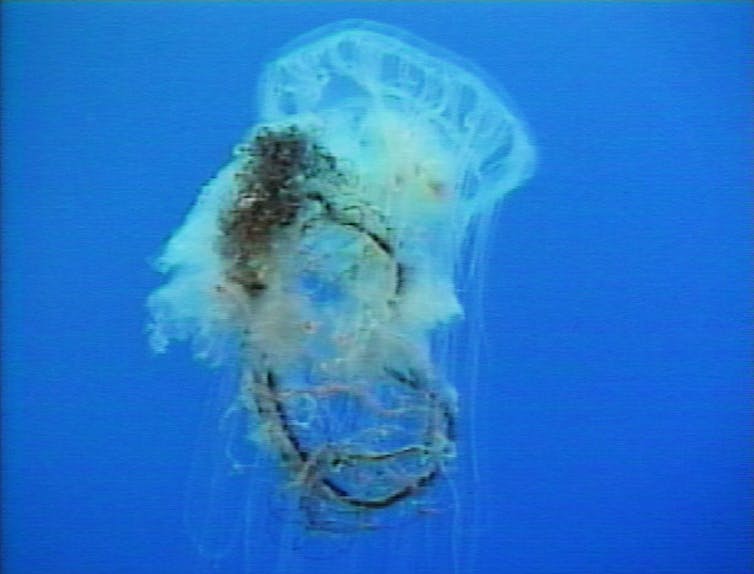 The most devastating effects fall on communities in poverty. New research shows the Great Pacific Garbage Patch is rapidly growing, posing a greater threat to wildlife. It reinforces the global movement to reduce, recycle and remove plastics from the environment.

But to really tackle this problem we need creative solutions at every level of society, from communities to industries to governments and international organisations.

To take one possibility, what if we invested in fast-growing, sustainably cultivated bamboo to replace millions of single-use plastics? It could be produced by the very countries most affected by this crisis: poorer and developing nations.

It is only one of many opportunities to dramatically reduce plastic waste, improve the health of our environments and people, and to help communities most susceptible to plastic pollution.