Work has resumed on widening the Western Highway near Ararat, Victoria, which will destroy thousands of trees. This includes around 250 sacred trees, some up to 800 years old. These trees are a living heritage of deep cultural significance and practice for the Djab Wurrung traditional owners.

In Australia, corporations such as Coles and Westpac and even some churches operate as legal entities entitled to most of the rights and responsibilities that individuals possess. Why don’t the Djab Wurrung sacred trees have legal standing?

In New Zealand, the Whanganui River now has it. Even in Victoria legislation to protect the Yarra River recognises the connection of the traditional owners to the river and surrounding land, Birrarung Country.

It’s not just people who have legal standing

Australian law has long accorded legal standing to other entities such as businesses. Under the Corporations Act 2001, a corporation is a legal entity that can enter contracts, lend and borrow money, sue and be sued, hire employees, own assets, and pay taxes. Over the past few decades corporate rights have expanded, and the process of incorporation has been simplified.

Corporations exist now as private enterprises for churches, not-for-profits and lobby groups. A corporation is separate and distinct from its owners, which minimises the risk for stakeholders and investors. It operates as a living person who can assert their rights in relation to economic (self)-interest.

The logic of Homo economicus and the utilitarian maximisation of profit is central to settler societies such as Australia’s. The settler colonial approach to nature decouples people from country. There is a hierarchy of rights that favours and reinforces settler property rights in the quest for new towns, farms, fences, and transportation lines.

If trees had rights this would be very costly for development. Trees are seen as resources, classified according to their utilitarian value.

Who speaks for the trees?

In Australia, the law protects trees if they are considered threatened, endangered or vulnerable. Indigenous plant species, for example, may be protected under the Environment Protection and Biodiversity Conservation Act 1999.

Vegetation may be protected more broadly as part of the public estate (such as in national parks, for instance). Native vegetation on private land may also be protected to conserve biodiversity and preserve habitat for endangered species. 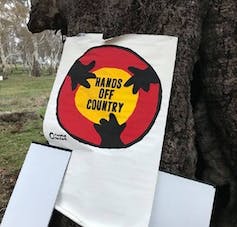 Recognition of the role of traditional owners, which includes protection of Country, is a key issue of environmental justice in Australia. Djab Wurrung Embassy

Federal and state government laws may protect “significant” trees through heritage and/or Aboriginal heritage legislation. Or they may not.

The Djab Wurrung have challenged both state and federal government decisions against heritage protection for the sacred trees and their surrounds. Activists have set up camp to protest the destruction of the trees – grandmother birthing trees, their companion grandfather trees, and directions trees.

They reject the rationale that supports the widening of a freeway over the preservation of significant living cultural heritage and ask for its protection:

We ask that this impending destruction as part of VicRoads works be halted immediately, more appropriate respect for the concerns of the Djab Wuurung community be taken into consideration, and that the trees and the site are protected.

Should trees have legal standing?

In New Zealand, the Whanganui River, which flows 145 kilometres to the sea in the central North Island, now has legal standing. The law recognises the Maori Iwi people’s sacred relationship with land and water.

Through this legislation the Whanganui River is recognised as a person when it comes to the law. The river has “its own legal identity with all the corresponding rights, duties and liabilities of a legal person”, the minister for Treaty of Waitangi negotiations said:

This legislation recognises the deep spiritual connection between the Whanganui Iwi and its ancestral river and creates a strong platform for the future of Whanganui River.

Similar “rights of nature” laws, which change the legal status of nature, exist in Ecuador, Bolivia, Colombia, India, and Uganda, to name a few.

Read more: Three rivers are now legally people – but that's just the start of looking after them

Why isn’t Australia embracing “rights of nature” legislation? Djab Wurrung trees, and the ancient dreaming cultural landscape of which they are part, need protection.

Communities are starting to advocate for the rights of nature to exist, thrive and evolve. Under the Yarra River (Wilip-gin Birrarung murron) Act, while the river’s legal status hasn’t changed, there is progressive recognition of the connection between the traditional owners and the river. As the preamble to the act states:

This Act recognises the intrinsic connection of the traditional owners to the Yarra River and its Country and further recognises them as the custodians of the land and waterway which they call Birrarung.

Such Indigenous perspectives, developed on Country in holistic ways incorporating lore/law, have a particularly valuable contribution to make to ecological economies.

We need far better legal recognition of the role of traditional owners, which includes cultural and environmental heritage protection. In the current political environment, deeply locked into a culture and mindset of economic growth and property ownership, “you’d have to be dreaming”.