In a large storage room in the basement of the former Musée d'Histoires Naturelles in Lyon, France, stands a rare relic of the colonial era: a full-body plaster cast of an 18-year-old Badtjala man from K’gari (Fraser Island), Queensland.

While the history of Europe’s “human zoos” is well documented from a European perspective, the research behind my novel Paris Savages builds on knowledge of Australia’s little-known connection to this confronting past; a past with lasting and damaging legacies.

The man from whom the cast was made, Bonangera (Benanyora, Bonny or Boni) stands naked and holds a boomerang over his head. The plaster has been painted a dark brown. His eyes have been coloured red. Rows of horizontal cicatrices, or tribal markings, are visible as scars on his chest. Also discovered in storage were casts of the man’s hands and feet.

The collection began to draw attention in 2009 when researchers at the museum, since relocated and now known as the Musée des Confluences, linked it to the European visit of an Aboriginal trio from Fraser Island. 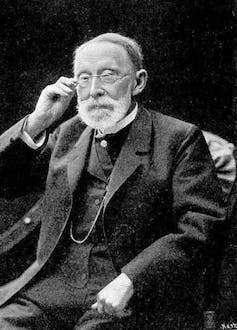 From the inscription on the base of the plaster foot, “Boni, l'australien”, it is likely this was the same “Bonny” famous physician and anatomist Rudolf Virchow examined in 1883.

Also studied were two other Badtjala people: Jurano/Jurono/Durono (aged 22), known in Europe as Alfred, and Dorondera/Borondera (15), known as Susanne. German man Louis Müller took the group to Germany in 1882 to perform in ethnographic exhibitions.

During our document research in Germany, Birgit Scheps of Museum für Völkerkunde zu Leipzig and I discovered a missing cast of Jurano was in fact a death mask, establishing that at least one of the troupe sadly died in Europe.

From the Lyon full-body cast, Bonangera appears proud and serious. It is likely he was concealing pain, for the gypsum plaster was often contaminated with lime and burnt the skin. But it is impossible to know how he truly felt. 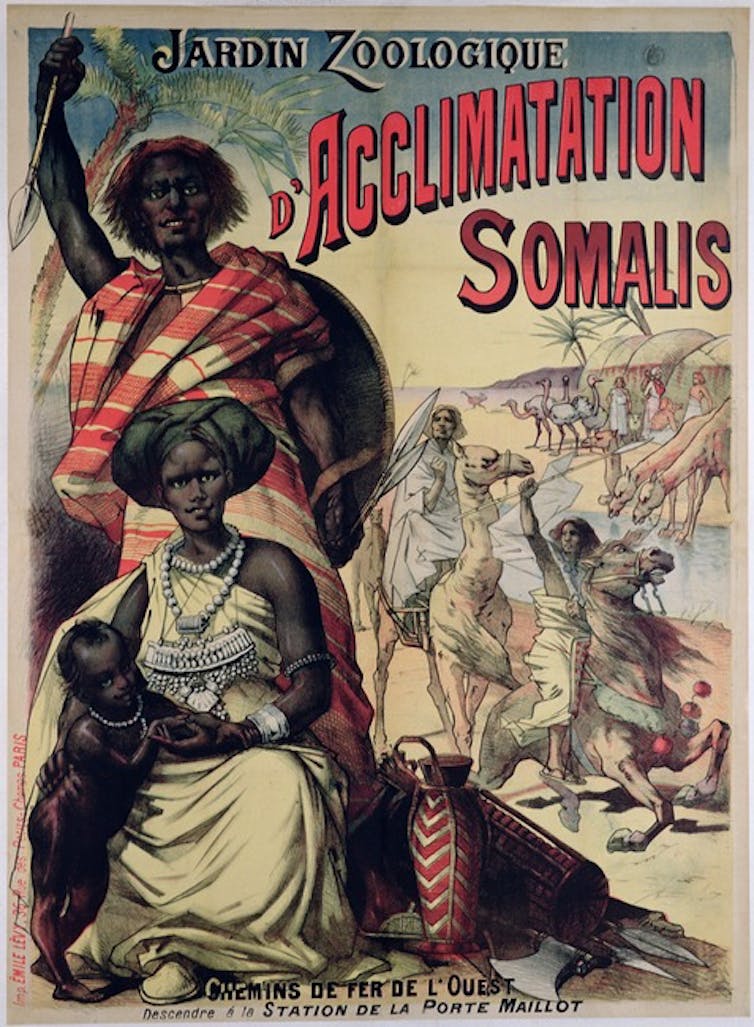 A poster advertising the Somali Park at Jardin Zoologique Paris in 1890. Wikimedia

Indeed, there are few first-hand accounts of any of the 35,000 performers from around the globe who French researchers estimate toured the West between 1810 and the mid-20th century. 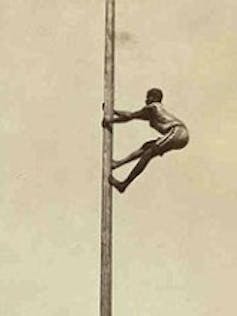 Bonangera climbs a tree believed to be in the zoological garden in Basel, Switzerland, in 1883 before he went to Lyon. Image: Staatsarchiv Basel

Throughout Germany, France and Switzerland, Bonangera threw boomerangs and spears, participated in mock fights with Jurano, and climbed tall poles vaguely reminiscent of the giant satinay and hoop pine trees that grew out of sand on Fraser Island. He danced and sang in a voice described in the German newspaper Illustrirte Zeitung as reminiscent of “the monotone negro melodies of America”.

In the Lyon basement, remnants of other “ethnic shows” include a canoe used by “Laplanders”, Sami people.

Inside a compactus are masks and shields. Bonangera stares straight ahead, his expression unchanged for, what would now be, 136 years. In an era aspiring towards postcolonialism, the cast is chilling.

Daniel Browning’s heavily researched documentary on the discovery of the cast, Cast Among Strangers, features an interview with acclaimed Badtjala artist and academic Fiona Foley, who travelled with Browning to Europe.

Disturbed by the silences in the history, I contacted Dr Foley about drawing on this episode as the basis for a novel. She informed others in her community and fact-checked aspects of the work. 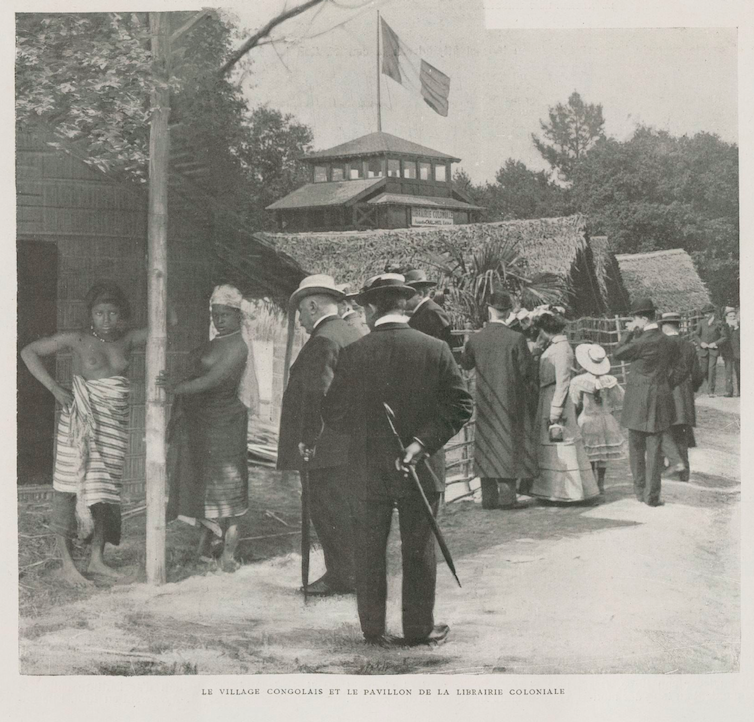 The Dresden casts of Bonangera and “Susanne” were made at the Berlin Panoptikum, where my research with Hilke Thode-Arora and Scheps confirmed the group performed. Also in the Dresden storage space were casts of Aboriginal performers from Queensland’s Hinchenbrook and Palm islands who, Roslyn Poignant writes in Professional Savages, were taken by self-confessed “man-hunter” R. A. Cunningham to Europe and America, where they performed in P.T. Barnum’s shows.

While the Sami negotiated contracts, even going on strike if conditions were not met, an 1882 account in the German journal Das Ausland has Dorondera turning her back on the audience. Was she asserting her agency over conditions she was unhappy with? 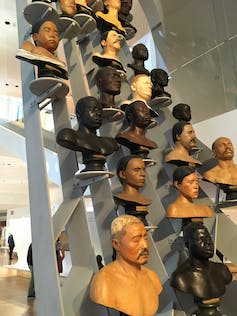 An exhibition of casts at Paris’s Musée de l’Homme (2017) grappled with the West’s obsession with the ‘other’. Author provided

After performances throughout Germany, according to the Berlin Panoptikum archives, one of the Badtjala men (likely Jurano) was admitted to Berlin’s Charité hospital in 1883. Dorondera disappears from the records without trace.

On August 23 1883, the French newspaper Le Progrès covered Bonangera’s Lyon performances with a “Samoyed” troupe (indigenous people from the Russian arctic) and their reindeer. It is an incredible image to imagine.

His last recorded sighting was reported in Salut Public on September 3 1883. Bonangera performed in Lyon throwing a boomerang, the racist account marvelling that people “little more than monkeys” could accomplish something by “playing” that Europeans could not do. We can only wonder what Bonangera made of his audience.

The last “human zoo” to close featured people from the Congo who were exhibited at the Brussels World’s Fair. The year was 1958.