This week New Zealand’s parliamentarians will vote on the third reading of the End of Life Choice Bill.

Much public discussion on the merits of euthanasia has centred around the role of the medical practitioner as healer. Some doctors and conscientious objectors worry that physician-assisted suicide will alter the relationship between doctors and their patients. They argue it is unethical, often invoking the Hippocratic oath.

The oldest code of medical ethics, the oath dates to around the fourth century BC and is still sworn by doctors today. It specifically forbids physicians from administering lethal drugs, among its other precepts.

Some critics of the bill present religious and moral objections against euthanasia, while proponents have focused on the trauma and pain of terminally ill patients and their families. All these arguments have a long history.

Read more: In places where it's legal, how many people are ending their lives using euthanasia?

The art of dying well

Like the Hippocratic oath, euthanasia (in its literal meaning of “good death” in ancient Greek) first appeared around the fourth and third century BC. Ancient Roman emperors, at death’s door, were known to consume wine, drugs and other palliatives to ease their dying. Good emperors were believed to deserve a dignified death, and often staged them.

In pre-modern Europe, experiencing a good death and intentionally shortening the agony of dying were separate matters. From 1400 on, there was a thriving trade in advice books on the art of dying. These instructed readers on how to prepare their souls for a “good death” and the Christian afterlife.

Prayers, rituals and information about what to expect offered practical guidance for attaining salvation. Christian theologians saw euthanasia as “a blessed and peaceful death of the faithful”.

Whether and how people sought to hasten or ameliorate death is less clear. Scholars only began considering the doctor’s role in enabling euthanasia in the late 16th century.

In 1605, English lawyer, statesman and natural philosopher Francis Bacon wrote that the physician’s office extends to matters of health as well as dying. In his words, a physician ought “not only to restore health, but to mitigate dolours, and torments of Diseases”. If there was no hope of the patient’s recovery, everything should be done “to make a fair and easie passage out of life”.

Bacon called this “fair and easie passage” euthanasia. Importantly, he distinguished between “outward” euthanasia and the soul’s peaceful transition to the afterlife. While the latter remained the purview of the spiritual realm, Bacon placed the former within medicine’s province. 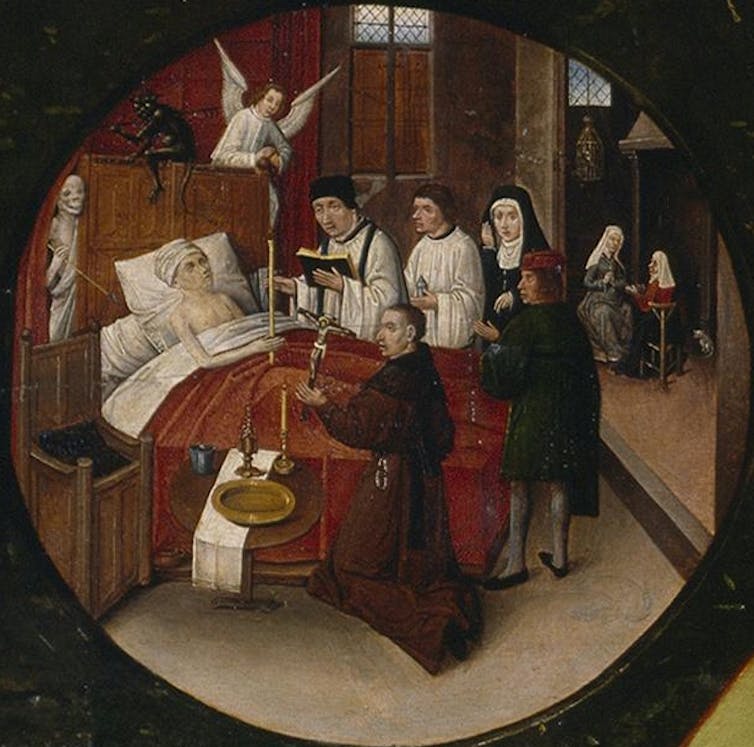 A devil and an angel weigh up a dying man’s soul. From Hieronymus Bosch: The seven deadly sins. from Wikimedia commons, CC BY-ND

Until recently, historians believed active euthanasia did not exist in pre-modern Europe, but historian of medicine Michael Stolberg has challenged this notion.

A physician in 1660s Antwerp, Michiel Boudewijns, wondered whether doctors could help their terminal patients die. While moved by patients in agony, Boudewijns urged Christian doctors to observe the fifth commandment and the Hippocratic rule of “do no harm”. He cautioned his colleagues against undertaking risky procedures and acting on compassion to expedite death in hopeless cases.

Read more: How hypothetical designs can help us think through our conversations about euthanasia

A matter of trust

Physicians also feared patients would lose trust in them if they knew they shortened dying patients’ lives. It was not until the late 17th century that facilitating dying sparked public debate among scholars. In 1678, Caspar Questel, a Silesian lawyer active in Saxony, wrote about assisted dying in the homes of ordinary people.

Methods to accelerate dying ranged from acts of faith and folklore to illegal actions. Questel had discovered that family members, nurses, nuns and other carers removed the pillow from under the head of the dying person. It was a widespread custom that was believed to quicken death.

Other forms of assistance included opening a window so the soul of the dying person would be encouraged to leave the body and meet God, placing lit candles around the gravely sick and placing the dying on the ground or putting them outdoors. More fatal actions involved suffocating the dying with a pillow or cutting their veins. Exercising empathy for the suffering of the dying was weighed against the risk of being charged for their premature deaths.

In present-day New Zealand, if this week’s vote is in favour of euthanasia, the option for assisted dying will still need to be ratified in a referendum next year.

Clearly, cultural customs, prevailing medical ethics and beliefs about death and the afterlife have evolved over time. Today discussions about euthanasia involve a wider range of participants than in pre-modern Europe. The distance between learned professionals and everyone else has narrowed. Civil rights, legal precedents and protections have given us a new language and ethics through which to understand fraught issues concerning our health, body and death.