The plight of Australia’s dairy farmers is on the political agenda this week, after One Nation leader Pauline Hanson narrowly failed in her Senate bid for a minimum milk price. But getting fair payment for their goods is far from the only challenge dairy farmers face.

Pressure has been mounting on the industry for the past decade. Existing milk alternatives are growing their market share, helped by a rise in veganism and public concern around animal welfare. The agriculture sector is under pressure to reduce its contribution to climate change, and technology advances mean milk may one day be produced without cows at all.

All this has been compounded by devastating and prolonged drought. So here’s the full story of the hurdles farmers face, now and in the future, to get milk into your fridge. 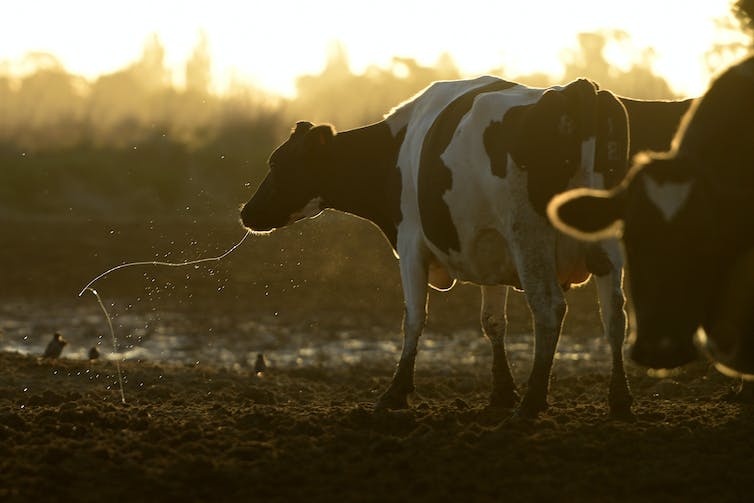 Dairy cattle at milking time at a farm in Rochester, Victoria. AAP/Tracey Nearmy

The rate at which processors pay farmers for milk is known as the farm gate price. The prices are not regulated and are set by market forces.

In 2016 the milk price crashed when Australia’s two largest dairy processors, Murray Goulburn and Fonterra, lowered the price they would pay from about 48 cents a litre to as low as 40 cents.

This dramatically cut the incomes of milk suppliers. The number of dairy farmers in Australia fell by 600, or 9% over four years. This exit has been exacerbated by drought.

Since then, the farm gate milk price has increased and in 2019–20 is expected to be 51 cents per litre, due to a weaker Australian dollar and demand from export markets. But forecast global prices for butter, cheese and whole milk powder this financial year remain below that of previous years.

Methane and other livestock emissions comprise about 10% of Australia’s greenhouse gas emissions.

As the Intergovernmental Panel on Climate Change made clear in its land use report in August, changes must be made across the food production chain if the world is to keep global warming below the critical 1.5℃ threshold. For beef and dairy livestock, this means changes such as land and manure management, higher-quality feed and genetic improvements. Meeting this challenge cost-effectively, while improving productivity, is no small task.

Technology may help in curbing greenhouse gas emissions from cows, but it also threatens to replace the dairy industry altogether. Advances in biotech may enable liquid analogous to milk to be produced through bioculture systems, without a cow in sight.

Elsewhere, the rise of plant-based alternatives derived from soybeans, almonds, oats and other sources threatens traditional milk products. This can partly be attributed to increasing numbers of people adopting a vegan diet. 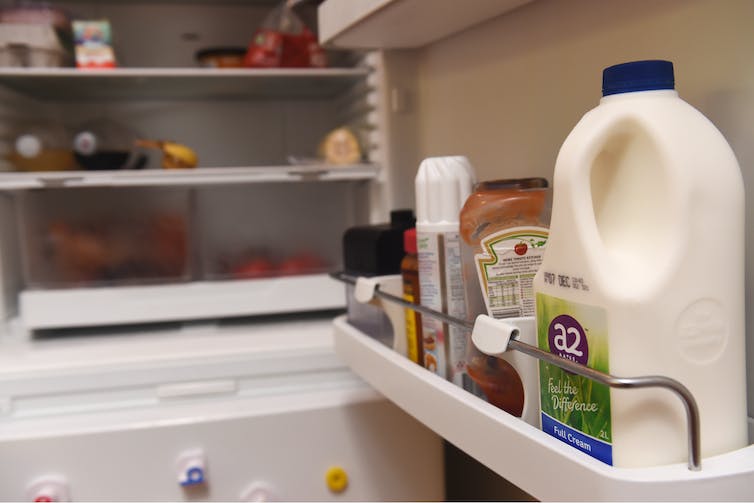 Farmers must overcome a host of challenges to deliver milk to consumers. Paul Miller/AAP

Taking calves away from cows

For a mammal to produce milk, it must usually become pregnant and produce offspring. Female calves generally go into a farm’s pool of replacement animals, while male dairy calves are sold.

Pure-breed male dairy calves do not naturally lay down a lot of muscle and so do not generally make good beef livestock. Many are sent to the abattoir for slaughter, typically between 5 and 30 days of age. This practice has prompted welfare concerns and means the industry must carefully manage the handling and transport of vulnerable young calves.

Potential solutions include artificial insemination of cows using only semen that will produce female calves. The use of this technology is limited because it reduces conception rates.

There is also growing public concern about the separation of cows and calves not sent to the abbatoir. The calves are typically taken within the first 12-24 hours and reared together in a shed, where they are fed milk or milk replacer. This is thought to maximise the amount of saleable milk and minimise disease transfer from cow to calf, particularly Johne’s Disease. However, recent research has found little evidence to support these practices.

Research has shown that calf-cow separation in the first day of life causes lower distress than abrupt separation at a few weeks of age or older, when the bond is stronger. This is not to say that early separation is not a concern. Rather, in the face of consumer demands for certain ethical standards, simple fixes may be hard to implement. 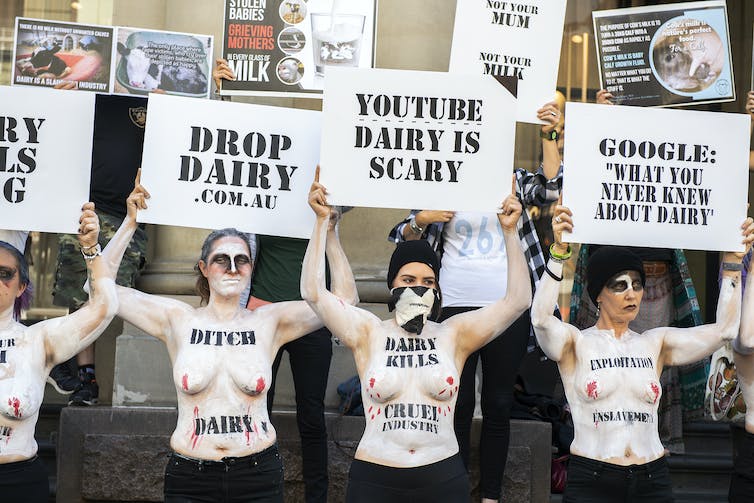 Topless animal welfare activists protest in Melbourne in February 2019 to raise awareness of what they claim is cruelty within the dairy industry. Ellen Smith/AAP

The message for consumers

Challenges to the dairy industry will take time and effort to address. Some, such as drought, are out of farmers’ control. Dry conditions and high cost of water, fodder and electricity have forced farmers to cull less productive dairy cows, leading to a decline in production.

Read more: Supermarkets are not milking dairy farmers dry: the myth that obscures the real problem

Putting aside the political push for a regulated milk price, the key message for dairy consumers is clear. If we want our milk produced in a certain way, we must pay a fair market-based price to cover the costs to farmers of fulfilling our wants.