Most of us will never see a platypus or a lyrebird in the wild, but it’s likely we’ve encountered them on television.

In the early years of ABC TV, there was very little locally produced animal content. When animals were on the small screen, they were usually imported from the BBC.

Zoo Quest was formative in the development of natural history television. It launched Attenborough’s career and established many of the cultural conventions of the format: the authoritative and intrepid male narrator venturing to exotic places in search of animals being their wild selves.

For Attenborough, the thrill of showing animals in their natural states gave the show “the spice of unpredictability”.

From the farm to the bush

The initial strategy for local animal content by ABC TV was to use familiar radio techniques – panel talks and natural sounds – and just add pictures.

Junior Farmer Competition, for instance, was a successful radio show. When it moved to television in 1958, live cattle, sheep and poultry were brought into the studio and competitors were asked to handle them before the cameras. 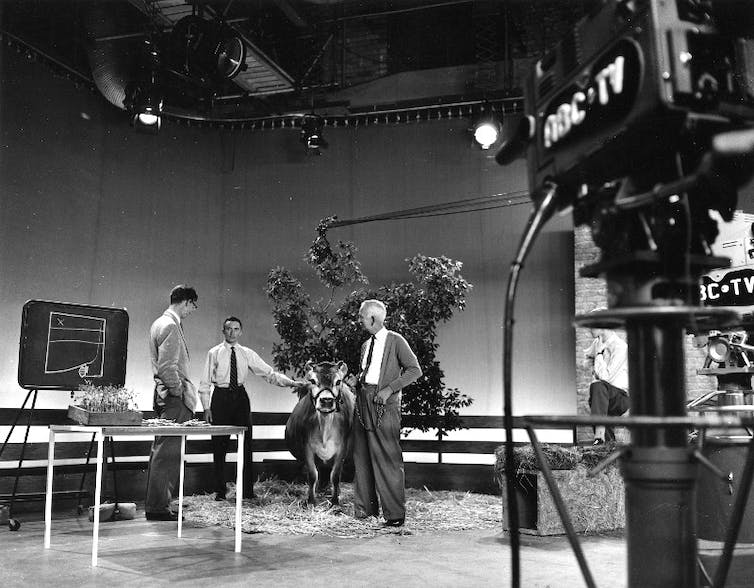 This show was a remarkable experiment in visualising a radio format – but it didn’t last. The logistics of wrangling livestock in a TV studio proved too difficult.

During the 1960s, the ABC began screening locally made wildlife shows. Wild animals were no longer somewhere else, in Africa or South America: they were all around us.

Wildlife Australia (1962-1964) was written by ornithologist and radio broadcaster, Graham Pizzey and produced with the CSIRO. The series took viewers into unique Australian environments, and explored the native wildlife in these habitats.

Other shows offered variations on this theme of an emerging environmental nationalism. Around the Bush (1964) starred naturalist and educator Vincent Serventy out in the field; Wild Life Paradise: Australian Fauna (1967), was filmed at the Sir Colin Mackenzie Sanctuary (later Healesville Sanctuary) and offered content about what made Australian animals unique. 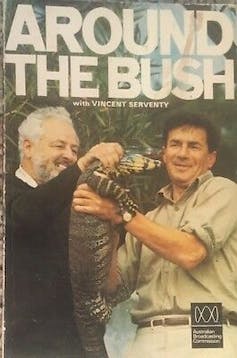 Around the Bush with Vincent Serventy was also published in a book by the ABC. ABC

As recurring references to Australia in these titles suggest, these shows were determinedly national. They often represented animals as living in “the bush” or “the environment”.

This early reference to “the environment” framed it as a zone where nature and culture interacted – usually with bad outcomes for nature. As early as 1962, audiences were invited to look at animals as both fascinating and vulnerable.

Animals and their habitats were framed as in need of public attention and concern in order to limit human intrusion and impact.

While nature conservation movements had been around since the post WWII period, they often focused on preservation of scenic sites for human pleasure. This early environmentalism gave conservation a more political edge. It valued nature in its own right and questioned development at all costs.

Probably the most groundbreaking early natural history show made by the ABC was Dancing Orpheus (1962). 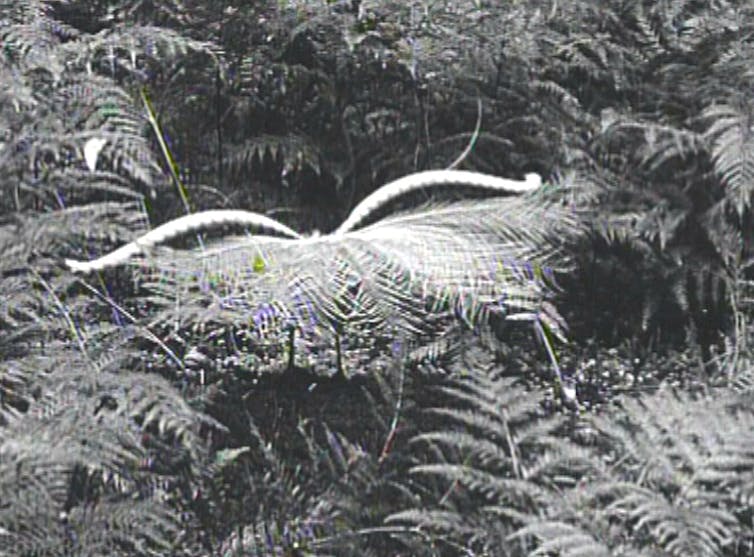 The award winning Dancing Orpheus captured the sounds and movements of the lyrebird. Screenshot/ABC/NFSA

Celebrated for its visual and technical prowess in capturing the secretive superb lyrebird, the most powerful scene showed a cock bird performing its elaborate courting display. The narration by John West offered scientific explanation, but the focus was on the extraordinary aesthetics of this pure natural expression.

Read more: Let me see you shake your tailfeathers: why lyrebirds really can dance

Dancing Orpheus was celebrated not just because it captured a rare and beautiful lyrebird performance, but because it also showed the emerging power of television to make remarkable Australian animals visible to audiences.

Dancing Orpheus was one of the catalysts for the development of natural history television at the ABC, which really took off with the watershed series Bush Quest with Robin Hill (1970).

Bush Quest featured the artist and naturalist Hill observing and sketching the wildlife of central and coastal Victoria. It established a new audience for Australian wildlife, breaking with earlier presentations of the remote bush or outback.

The ABC’s Natural History Unit was created in 1973. This small unit produced a suite of top rating programs that publicised a huge variety of Australian animals, way beyond the usual kangaroos and koalas.

Early natural history television on the ABC showed audiences animals and places they didn’t even know existed, and explained natural processes in ways that were accessible and engaging. It also showed audiences how vulnerable these animals and habitats were to human actions and intervention.

Natural history television on the ABC didn’t just make animals entertaining: it implicated audiences in their lives and survival, a significant factor in building environmental awareness.