Hugh Ramsay’s Two girls in white, known for many years as The sisters, is one of my first memories of the Art Gallery of New South Wales.

I was intrigued by these women wearing fancy clothes, who were interesting rather than pretty.

Later I came to appreciate how Ramsay used obvious strokes of paint to imply texture, as well as the many different colours that were white. When I studied art history, I realised the painting was in part an homage to the virtuoso treatment of fabric by John Singer Sargent and the tonality of James McNeil Whistler.

However, the faces don’t fit the model of fashionable Edwardian portraiture. There is no flattery here. Their strong, raw features imply honesty and strength of character. Who were they, and why were they staring so intently?

The answer lies in the date, 1904, two years before Ramsay died of tuberculosis at the age of 28.

Two girls in white is a composite study of three of Ramsay’s sisters, looking at the brother who has been told that the decision to paint them will shorten his life. And those red flushed cheeks on one of the two? The figure on the right is a combination of the elegant Madge and Jessie, who nursed the acutely ill Ramsay when he returned from Paris. Jessie died four years later from the same illness. Rosy cheeks are one symptom of the disease.

The Ramsay exhibition is a visual record of the pathways leading to this work.

It opens with the rigorous but dull teachings ofBernard Hall at Melbourne’s National Gallery School. Ramsay excelled in painting the precise backs of nudes so valued by his teacher, but he recognised the limitations of Hall’s pedagogy.

Instead, he sought the company of artists recently returned from Paris, befriending the older John Longstaff, who would become a lifelong mentor. 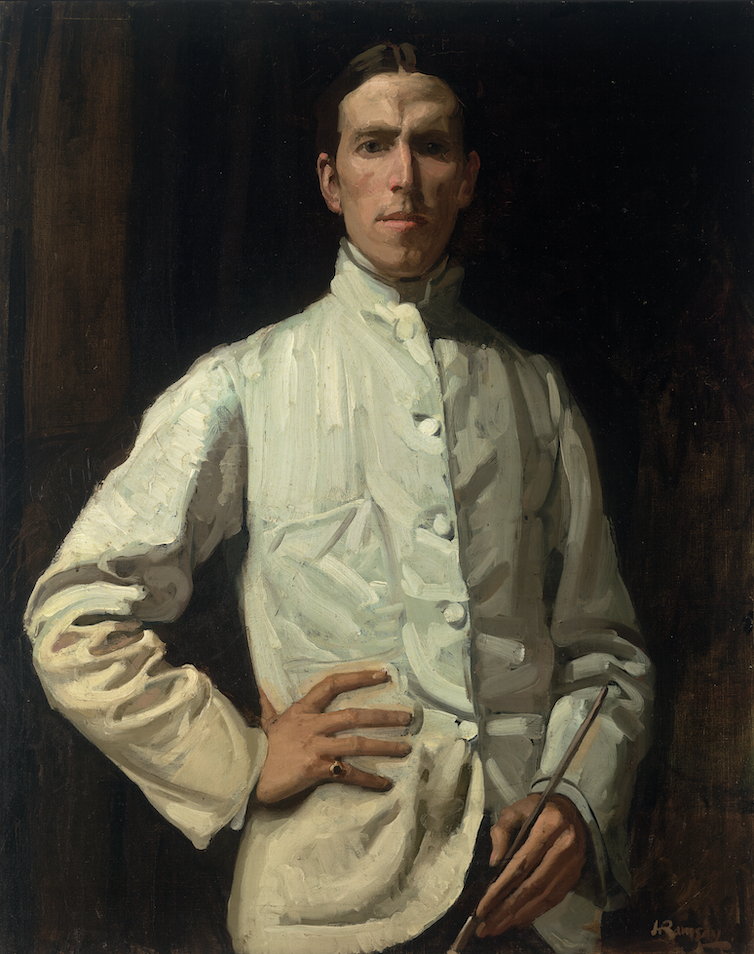 Ramsay’s father, who had brought the family from Scotland when the artist was a baby, objected to his career choice. He had some financial help from an older brother but the young artist raised most of his own money to travel to Paris. The cold and malnutrition he experienced as a result of poverty was one of the triggers for his final illness.

With the exception of some commissions, most of Ramsay’s subjects were his sisters, his friends, and himself. One advantage of such a limited repertoire is that it is easier to track how his art developed in Paris.

There is a liberation of paint, but a continuance of the muted palette first seen in Melbourne. He ventured into fashionable decorative symbolism, but for the most part he placed himself in the academic tradition of Velázquez, with a nod to Whistler and sometimes Sargent with his virtuoso frills and furbelows.

At NGA, a series of self-portraits dominates one wall, each giving subtly different approaches to tone, using his body as an element in the overall composition. 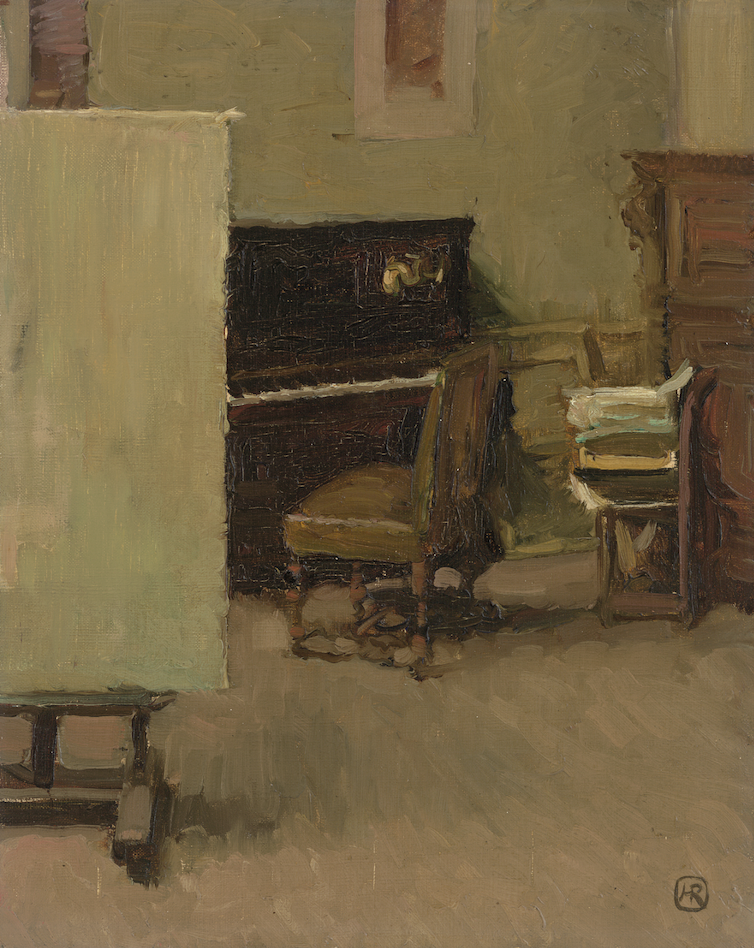 There is no figure in Interior of an artist’s studio, but this exquisite small study, balancing forms and shapes in tonal harmony, gives an idea of one direction his art may have taken if illness had not intervened.

Then there is the deliberately angular Jeanne, a Whistler inspired portrait of his concierge’s daughter. The muted tones of the thinly applied paint are lifted by the red bow in the little girl’s hair.

Australians in Paris looked out for each other. Ramsay’s friends included George and Amy Lambert, Ambrose Patterson and J. S. MacDonald.

The grandest of patrons was Patterson’s relative by marriage, Nellie Melba. The exhibition includes a small study for the grand portrait that Ramsay planned to paint of her. He travelled to London for the commission but just as his talents were being noticed, he was diagnosed with tuberculosis.

Melba lent him money to return to Australia, where she hosted a solo exhibition at her house in Toorak. She continued her support him with commissions to paint a portrait of her ailing father and her niece, Nellie Patterson.

It seems Ramsay was determined to leave a legacy that would endure. After he was told painting would exacerbate his illness, Ramsay painted his largest work, An equestrian portrait, a study of his doctor’s son. 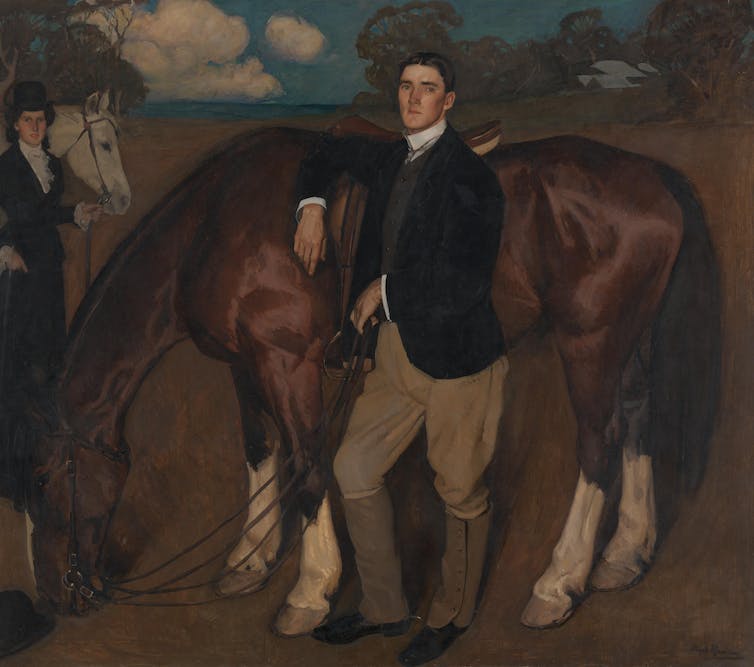 He painted portraits of his sisters, culminating in Two girls in white, which he completed in 1904. It is not his final painting. There was another, incomplete, self-portrait, focusing on his solemn face, looking at the underlying structure of his bones, painted just months before his death.

Ramsay was perhaps luckier in his afterlife than in his life. For well over a century, his family have worked to ensure his place in Australian art history. As well as donating many works to public collections, they have endowed the Hugh Ramsay Chair of Australian Art History.

If he were not such an outstanding artist this familial devotion to his memory would be awkward. As it is, the Ramsay family have done us all a service in keeping Ramsay’s name alive in the narrative of Australia’s art history.