Our team has discovered a cave painting in Indonesia that is at least 44,000 years old and which may cast new light on the beginnings of modern religious culture.

This ancient painting from the island of Sulawesi consists of a scene portraying part-human, part-animal figures hunting wild pigs and small buffalo-like animals with spears or ropes.

As we report today in Nature, our dating study shows this is the world’s oldest known representational artwork (as the images depicted are figurative in nature).

The depiction of the part-human, part-animal hunters may also be the earliest evidence of our capacity to conceive of things that do not exist in the natural world. This ability is a cornerstone of religious thought and experience with origins long shrouded in mystery.

The new cave art site is named Leang Bulu’ Sipong 4 and our Indonesian colleagues discovered it in December 2017. It is one of hundreds of cave art sites in the Maros-Pangkep limestone karst region of South Sulawesi. 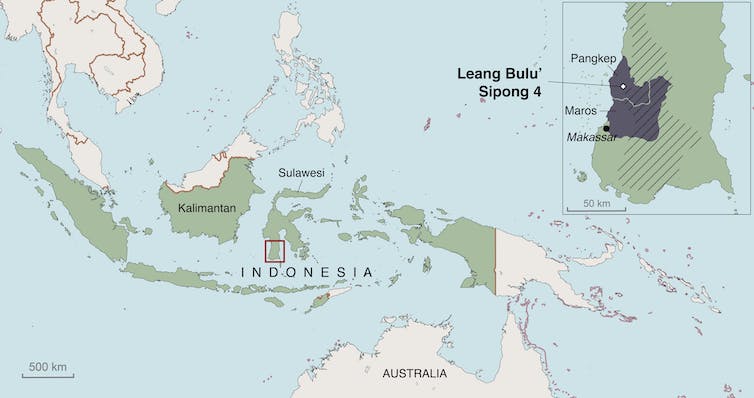 In 2014, we announced that a cave (Leang Timpuseng) in Maros-Pangkep harbours one of the world’s oldest rock art motifs, a hand stencil created at least 40,000 years ago.

We also recently reported on a figurative painting of a banteng (a species of wild cattle) dating to at least 40,000 years ago from a Kalimantan cave on the adjacent island of Borneo.

Until now, this painting was the earliest known figurative motif on the planet.

A team effort to date the art

Fortunately, we were able to collect small mineral growths that had formed over the paintings at Leang Bulu’ Sipong 4. We dated this “cave popcorn” using uranium-series analysis, which calculates ages by measuring the radioactive decay of elements.

We conducted our study in collaboration with researchers from several Indonesian institutions, including Indonesia’s National Research Centre for Archaeology (ARKENAS) and scientists from the culture heritage preservation department (BPCB) in Makassar.

So the art in this Indonesian cave was created at least 44,000 or so years ago!

Why is this art important?

Our results show the painting at Leang Bulu’ Sipong 4 is the oldest figurative art in the world.

Aside from the extraordinary antiquity of this painting, this is the first time a detailed visual narrative or “story” has been identified in cave art at such an early period.

The standard view in Europe is that humanity’s first rock art consisted of simple geometric symbols, which evolved into the sublime figurative paintings of animals from France and Spain from around 35,000 years ago. In this view, the first scenes and human-animal hybrids (known as therianthropes) came along much later.

But the art at Leang Bulu’ Sipong 4 suggests the major components of an advanced artistic culture were already present in Sulawesi 44,000 years ago: figurative art, scenes, and therianthropes.

It’s possible “complex” art like this was already being made somewhere in Asia (or Africa) even longer ago.

The dawn of human spirituality

The early portrayal of therianthropes at Leang Bulu’ Sipong 4 is fascinating. 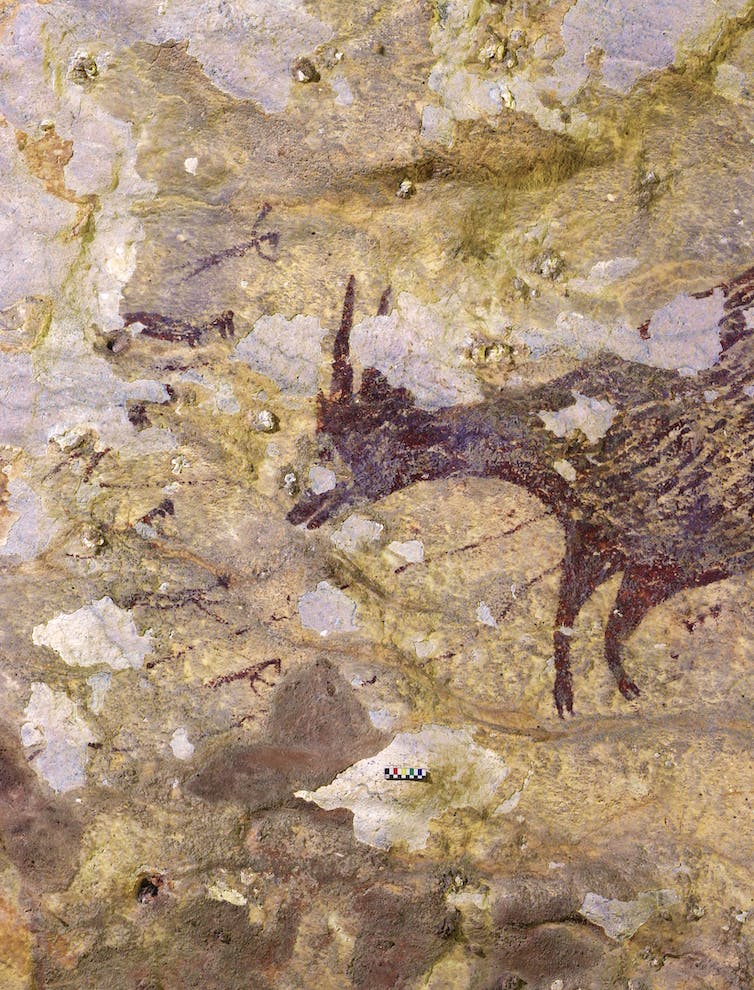 Hunting scene at Leang Bulu’ Sipong 4. A group of small part-human, part-animal figures is apparently capturing an anoa (a buffalo-like creature native to Sulawesi) with what seem to be ropes or spears. Ratno Sardi

In Western culture we are most familiar with part-human, part-animal images like werewolves. But therianthropes often have great religious significance. 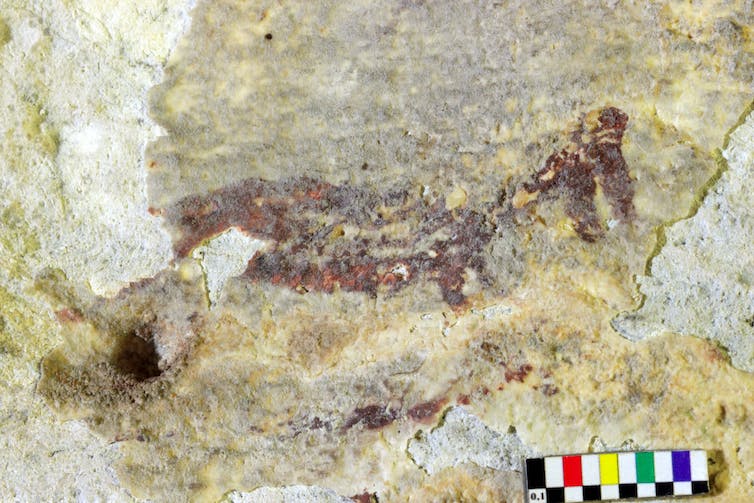 A therianthropic figure in the hunting scene at Leang Bulu’ Sipong 4. This motif appears to represent a human figure with bird-like head and beak. Ratno Sardi

For example, ancient Egyptians revered and feared many deities and demons whose physical forms combined animals and humans, such as the jackal-headed god of death, Anubis, and the sphinx, which had a lion’s body and a human head.

When did we first develop the capacity to dream up such extraordinary creatures?

Up until now the earliest known image of a therianthrope in world archaeology was the “Lion-man” from Germany, a figurine of a human with a feline head carved from a mammoth’s tusk. Nazi archaeologists unearthed this artefact in 1939 and it is said to be 40,000 years old.

At 44,000 years or more, the figures from Leang Bulu’ Sipong 4 predate “Lion-man”. They may represent the earliest indication of our ability to imagine the existence of non-real entities like therianthropes.

This ancient world is disappearing

This Sulawesi cave art is a gift from the dawn of human culture. But it is crumbling away before our eyes.

Our rock art surveys with our Indonesian colleagues have uncovered many new cave sites in Maros-Pangkep with spectacular figurative paintings that still await dating. We have also observed the alarming deterioration of this art at almost every location.

Monitoring by BPCB confirms the limestone cave wall surfaces on which the paintings were made are peeling off, erasing the art. This process is happening quickly: at some sites, patches of art 2-3 cm wide vanish every couple of months.

It would be a tragedy if these exceptionally old artworks should disappear in our lifetime. We need hard scientific data that can tell us why this globally significant rock art is deteriorating and what we can do about it – and we need it now.