So once the votes have been counted and receipts processed, what will we have learnt about UK politics, and Britain’s place in Europe?

Ultimately, and regardless of the final vote tally, UK politics has never been more paradoxical, fragmented and contradictory. The UK political system was designed to build strong parliamentary majorities for long, five-year terms.

Read more: Boris Johnson sends UK voters to the polls, hoping for the 'right' kind of Brexit. But it just might backfire

Indeed, the 2011 Fixed-term Parliaments Act was introduced to entrench this tradition, yet proved irrelevant. If we include the 2016 European Union referendum – the Brexit vote – this is the fourth time Britons have been to the polls in five years.

So what can we expect this time? On some polls, the nation looks headed for another hung parliament, with no clear majority of either of the major parties. While many voters, especially outside the main metropolitan centres, seem disillusioned and angry with politics, voter turnout has increased for the past four elections, with a respectable 68.8% turnout in 2017.

Other polling has the Conservative Party, led by Boris Johnson, holding a relatively steady lead of about 43%, with Jeremy Corbyn’s Labour hovering about 10% below. Yet, for a national election, the result is likely to be decided on a highly regional, fragmented and seat-by-seat basis.

Johnson’s campaign is based on the slogan “Get Brexit done”. On one level, this is savvy politics, tapping into longstanding voter frustration. Yet Johnson is a charlatan, prone to hyperbole, and voters remain wary of him.

Johnson, after all, promised he would rather be “dead in a ditch” than ask for another Brexit extension, if the third deadline of October 31 2019 was not met. Moreover, he hung the Northern Ireland Democratic Unionist party (DUP), his erstwhile coalition partners, out to dry with his last Brexit deal.

While the Conservatives have sought to buttress their Brexit plans with some increased public spending, including the dubious pledge of 50,000 new nurses (a disputed figure since it already includes 20,000 existing nurses), these promises are neither trusted nor credible. Strikingly, while Johnson employs the rhetoric of “one nation” Tory-ism, former prime minister John Major and other Conservative heavyweights have refused to back him.

Corbyn, in contrast, has been running an altogether different campaign. He would rather run on any other issue except Brexit. His “Brexit-neutral” policy is an agonised compromise between his own Euroscepticism, the estimated 30% of Labour voters who voted “leave”, and the vast majority of (especially London-based) remainers.

Corbyn has consolidated his 2017 agenda, with another big-vision, high-cost program. These include ambitious claims to build free broadband internet for the whole UK, increasing health spending and widescale nationalisation.

The sums involved are significant, and the electorate remains largely unconvinced. Yet, in another irony, Labour’s plans would still not take the UK to either French or German levels of investment in public services.

Corbyn, like Johnson, has also presided over mass defections from his party and lacks the support of former leaders. 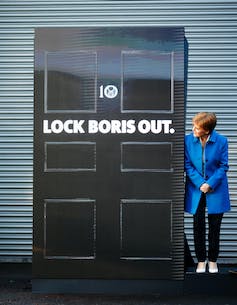 The Scottish National Party, led by Nicola Sturgeon, will seek to exploit anti-Tory and Labour feeling in Scotland. AAP/EPA/Robert Perry

Overall, UK politics is undergoing a fundamental realignment, masked by the electoral maths and first-past-the-post voting system. While the Liberal Democrats were expected to make major inroads under Jo Swinson’s leadership, this has failed to materialise. Johnson has also been helped significantly by the decision of Nigel Farage’s Brexit Party not to contest Conservative seats.

Despite the promise of a new politics from breakaway party Change UK – The Independent Group, it has rather fizzled out. Ironically, this is a strangely familiar two-party race in large parts of England. Yet, regionally, if the Scottish National Party builds on its result – it holds 35 of the 59 seats in Scotland – it may dominate in staunchly “remain” Scotland.

So, what might happen? There are at least three potential scenarios.

First, a clear Johnson victory, in which the Conservatives win a strong majority of the 650 seats. This would rely on a collapse of the Liberal Democrat vote and the Corbyn “surge” to fail.

Second, a hung parliament, in which Johnson, like Theresa May before him, would need to eke out a deal to secure power. This might rely on a new healing relationship with the DUP.

Third, a Corbyn win, in a minority “rainbow” coalition on the back of a promise of a second referendum. Again, paradoxically, these might all lead to further Brexit paralysis.

While Johnson did win a majority for his withdrawal agreement, it’s far from clear, even with a strong majority, if a “hard” Brexit can be avoided. Basically, a hard Brexit would cuts all ties and links with the EU, and the UK would be bogged down trying to negotiate a new trade deal with Europe. Yet, even if Brexit is paralysed, Scottish independence will certainly inch closer.

A further EU referendum might also expose what we know already: on many issues, the UK remains deeply divided. Whatever the result, there are underlying cultural and social changes taking place across the UK, and the party system is nowhere close to catching up to them.

The ultimate paradox for Johnson is that all this electoral activity might not have changed anything at all.