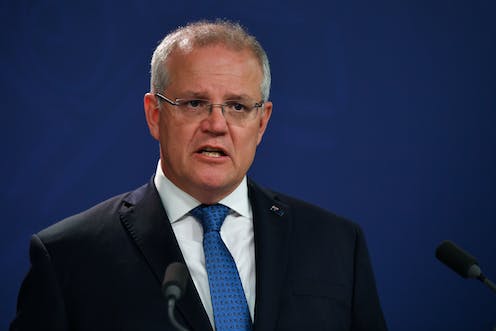 Scott Morrison has rejected or sidelined a number of recommendations from the long-awaited Thodey review of the public service that might have constrained his and his government’s power.

Not surprisingly, a proposal to ensure changes to the machinery of government “are well planned and evaluated” received short shrift.

The Thodey panel urged there be “principles to inform the Prime Minister’s deliberations” on such changes, and evaluations of how changes had worked should be published.

The report was released on Friday, with a point-by-point response.

But Morrison had already preempted it with his announcement of an extensive shake up of departments and departmental heads, as well as earlier setting out his views on the service.

His changes, announced this month, cut the number of departments from 18 to 14. But they have raised questions about how a department such as infrastructure, transport, regional development and communications will operate, given it will have four cabinet ministers and several juniors.

The wide-ranging Thodey panel’s Independent Review of the Australian Public Service has made 40 recommendations; the government says it agrees fully or “in part” with a majority.

But while only a minority were rejected outright or “noted”, these, plus the rejected sections of those accepted “in part”, have sent a very clear message: the government has no intention of countenancing reforms that would circumscribe its power.

For example, it has rejected the recommendation to clarify and reinforce the public service’s leadership roles and responsibilities. Its response was that things are fine and further clarity in legislation unnecessary.

A suggestion for putting more process around the appointment and termination of secretaries did not go down well. After all, Morrison has just sacked five secretaries.

“The Government considers that current processes and arrangements governing the appointment and termination of secretaries and agency heads work effectively,” the response said, adding a commitment to the “apolitical nature of the APS.”

A proposal for a legislative code of conduct for advisers, with enforcement provisions, was dismissed. “The government expects all ministerial staff to uphold the highest standards of integrity and it uses a range of mechanisms to ensure they are held to account for these standards,” was the response.

The idea ministerial offices should have at least half of their ministerial policy advisers with public service experience also fell on deaf ears.

A recommendation for the public service to work closely with the states to jointly deliver improved services received the thumbs down.

Under the recommendation the Council of Australian Governments would set and publicly report on certain national priorities “with clear, shared metrics for success”. But the government said “existing arrangements are effective”.

Dealing with the inquiry led by David Thodey, a former CEO of Telstra, which was set up by Malcolm Turnbull, seems to have been a somewhat fraught process. Some months ago the panel was told to reflect on the priorities the Prime Minister had set out. Then the release of the final report has been held off until after Morrison’s announcement of his restructuring.

Morrison’s emphasis is heavily on the public service’s delivery role, which he wants substantially improved. He sees its advisory role primarily in terms of how best to implement an agenda set by the government.

His foreword to the government’s response repeats his now oft-stated point: “In the Westminster system of parliamentary democracy, it is the Ministers who are accountable to the public. It is Ministers who provide policy leadership and direction”.

In its review, the Thodey panel says the public service is not broken, but it “is not performing at its best today and it is not ready for the big changes and challenges that Australia will face between now and 2030”.

The service needs to

Stressing the need to strengthen the service’s capability, the report says the impact of doing this “will be profound. By 2030, the APS can be a place where the most talented, motivated people aspire to work”.