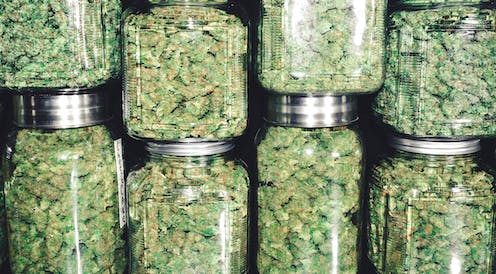 Earlier this month, the New Zealand government released draft legislation for how cannabis could be bought, grown and sold. It is a first glimpse at what New Zealanders will be voting on in next year’s cannabis referendum.

Justice minister Andrew Little said the primary objective of the draft bill was to reduce overall use and protect young people from access.

The bill proposes a minimum purchase and use age of 20 and restrictions on marketing and advertising of cannabis products. It says harm minimisation messages are to be included, consumption prohibited in public places and sales limited to specifically licensed physical stores. The cultivation and supply chain would be licensed and controlled by the government.

A clear public health orientation is to be applauded but once cannabis is made legal, I suggest the chances of increased use are high. This is not necessarily an argument against legalisation but we need much clearer thinking about the parameters of the legal cannabis market than is obvious in the current debate.

Despite claims of high levels of use in New Zealand, the best data suggests only 15% of adults used cannabis in 2018/19, compared with 80% drinking alcohol.

In the US, where states have legalised medicinal cannabis and more recently recreational use, there has been an increase in cannabis use disorders among adults, prenatal and unintentional childhood exposure, use in adults and cannabis-related emergency room visits and fatal vehicle crashes.

We must expect more health harm from legal cannabis and, if legalisation is to go ahead, the government is right to draft law that protects us, and particularly the most vulnerable. But we may need to go beyond what the government is currently planning.

The level of harm from cannabis use depends on the amounts consumed, and there are many factors that drive use. These include levels of disadvantage, a sense hopelessness, familial history or personal and family crises, but one of the important drivers of heavy use is the way the products are supplied and marketed. This draft bill attempts to grapple with this.

The cannabis referendum provides both an opportunity and an imperative to question the proposed policy response. Our consumption is now strongly influenced by large and powerful transnational corporations, several of which produce alcohol products and will be the producers of the cannabis we smoke, vape, eat and drink.

Already alcohol companies are part owners of cannabis production overseas. The resources and influence these transnational alcohol corporates wield in the political arena weaken and prevent good legislation being passed throughout the world. The alcohol transnationals (aided by the advertising industry) have succeeded in fighting off meaningful regulation to control their marketing.

The draft New Zealand cannabis law proposes advertising regulations similar to those of the Smokefree legislation. These regulations, relevant when they were introduced in 1990, include no reference to marketing via social media platforms, where most alcohol marketing now takes place. Big data is used to target potential heavy drinkers and send messages the recipient they may not even recognise as marketing.

Despite some voluntary restrictions on social media platforms, cannabis is being marketed with the help of influencers.

You could argue the ban on advertising is a bit tough given alcohol corporations are still allowed to advertise … .

We should expect a push from corporates around the world to bring cannabis regulation (in all its aspects) into line with very weak controls on alcohol. Countries around the world are looking at cannabis regulation and will learn from each other as the research on the impact of legalisation mounts. But the global corporations are already active and have resources to influence the policy processes.

Tobacco control has benefited greatly from an international and legally binding treaty, the Framework Convention on Tobacco Control. This specifically excludes corporate influence from the policy process. As a signatory to this treaty, New Zealand agreed to prevent tobacco industry influence on policy. There is no recognition of a similar intention in the draft cannabis bill (or in alcohol legislation).

Alcohol is the only drug not subject to an international health treaty and this is urgently needed.

The UN conventions on illicit drugs are not relevant when cannabis is legalised.

It is time to complement national policy on both alcohol and cannabis with a global framework that prevents industry influence on policy. This would help reduce harm by recognising the conflict of interest in maximising profits from selling addictive and intoxicating products.